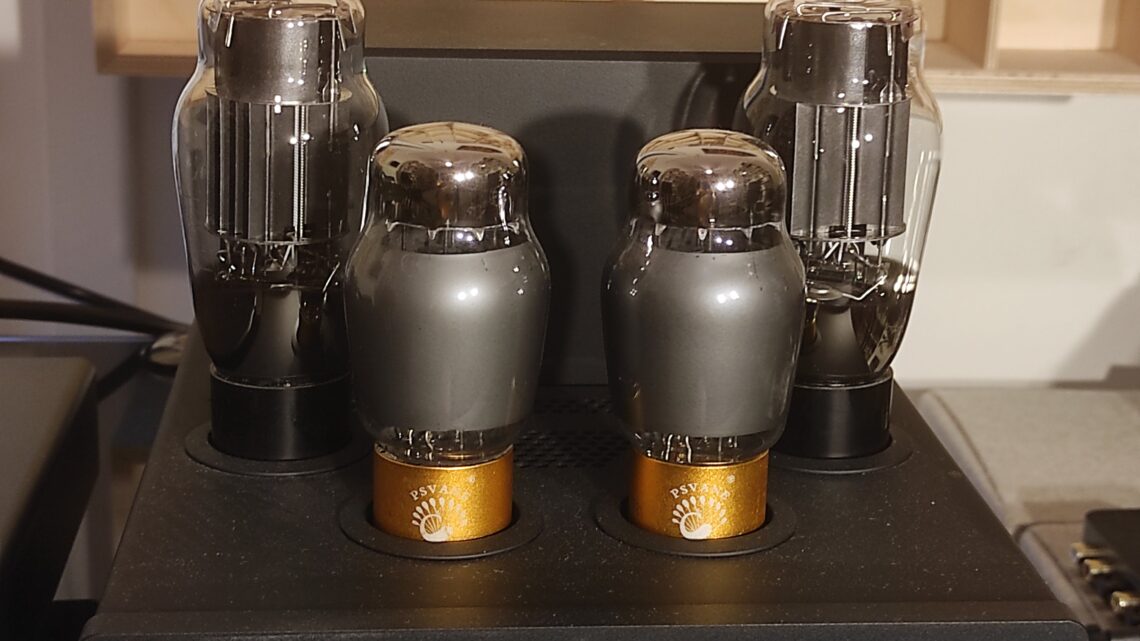 A valuable piece of Art

The Feliks Euforia was provided on a long term loan to be featured in a series of reviews in various media.
Feliks never asked for a favorable review.
This is my honest and subjective evaluation of it.

The article was originally published in hxosplus Sound and Vision printed edition and this is a third party translation of it.
(Thank you Angelos!)

The feature story of this review is an OTL headphone amplifier from the Feliks Audio company located in Poland.

Feliks Audio is not a newfound company , but rather an established one , since its foundation dates back over a decade.
Feliks Audio is a family business , whose founder , namely : Henryk Feliks , started his business venture by creating valve amplifiers , available upon request , while now they offer a ready made line of amplifiers.
The products are designed and made both by the founder himself and his three sons in their proprietary factory in Poland.

The company philosophy , explained by mister Lukasz himself , who is one of the three brothers , is to provide customers with products which combine the advantages of tubes with contemporary requirements , with regard to transparent sound without any distortion.
In order to achieve the latter , Feliks Audio follows a strict and minimalist approach , concerning the design of circuits by deploying the least possible parts , so as to avoid interfering with the signal path.
Additionally , it should be made mention of their taking under serious consideration of the importance of using high quality materials.

There are four headphone amplifiers available from the entry level Echo mark ii (€699) to the high end Euforia Anniversary (€2899).

You can order directly from Feliks Audio 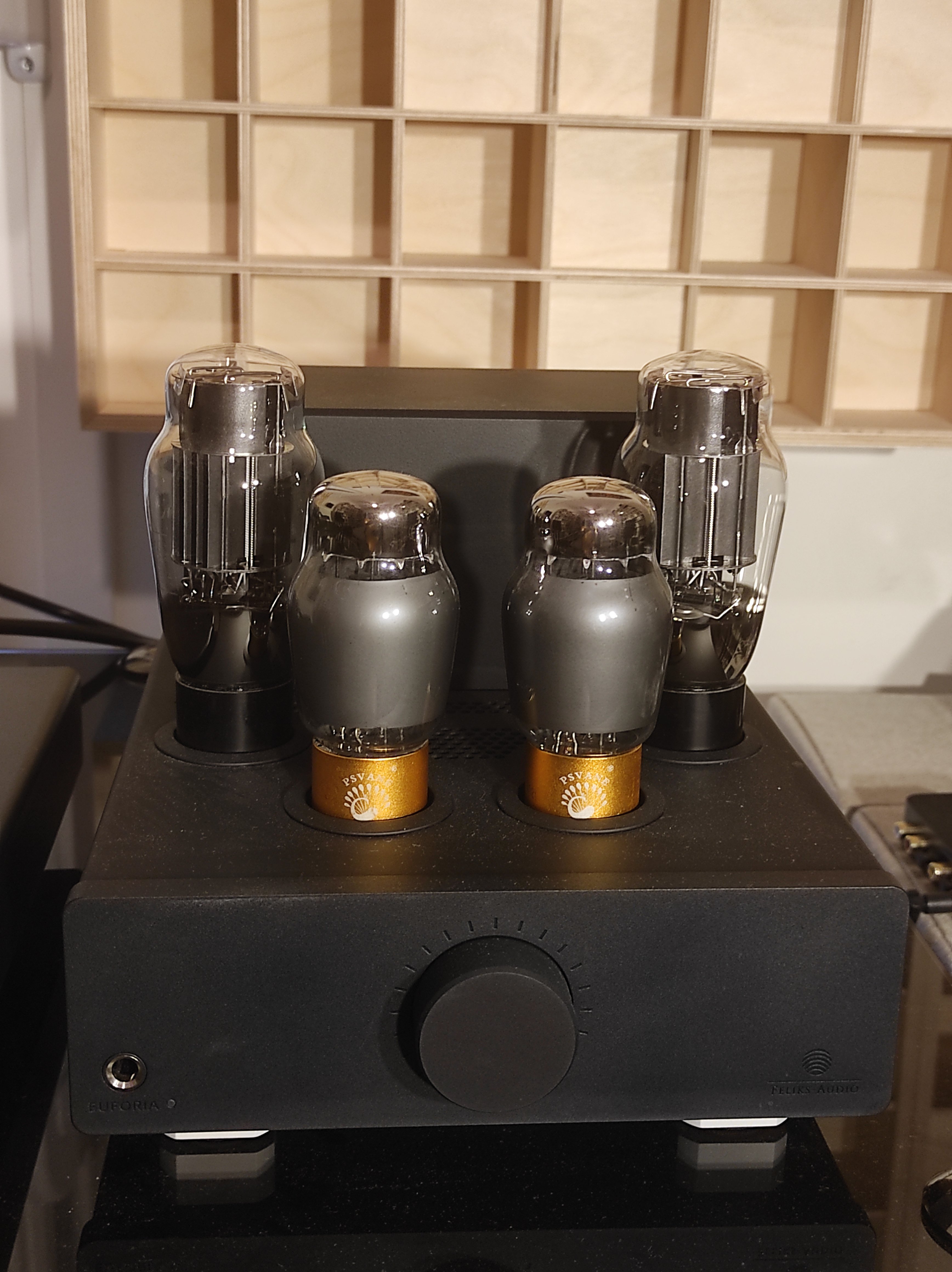 The Euforia amplifier , along with its anniversary edition is considered to be the flagship of the company and it entails the experience gained by extensive research and user feedback.
This specific amplifier was introduced to the market some years ago, however it could not be defined as being old , due to its designers’ continual efforts to improve and advance it , based on customers’ recommendations and certainly their own passion for optimal results.

The latest revision occurred in 2019 and apart from the internal circuit changes , the company also took great care of noise rejection utilising double shielded chassis , while it has been added a proprietary fully analog crossfeed circuit.

The Euforia amplifier employs two premium Psvane tubes , namely : CV-181 Mk2 Gold (6SN7) and two NOS 6N13S (6AS7G) , for the preamplifier stage and the amplifier stage , respectively.
One can order it , either choosing Psvane Silver (-100 euros) or even without using any tubes at all (-200 euros).
The internal circuit of the amplifier is populated by top quality components of the best manufacturers like Mundorf and Nichicon capacitors , Dale and Caddock resistors and handmade toroidal multiple shielded transformers.
The tubes are placed on teflon , gold-plated bases and the amplifier also has gold-plated heavy-duty rca binding posts.
The circuit is handmade utilizing point to point soldering while the internal wiring is pure silver with teflon insulation , which improves the details and the high frequency extension.

The finish and build quality are exceptional and the amplifier oozes a high quality aesthetic especially when seen while powered on under dim room light.
The Euforia is rated at 250mW with an enhanced current delivery to suit high to medium sensitivity planar magnetic headphones.
The distortion is only 0,4% at the worst case and the amplifier weight is a hefty 6kg. 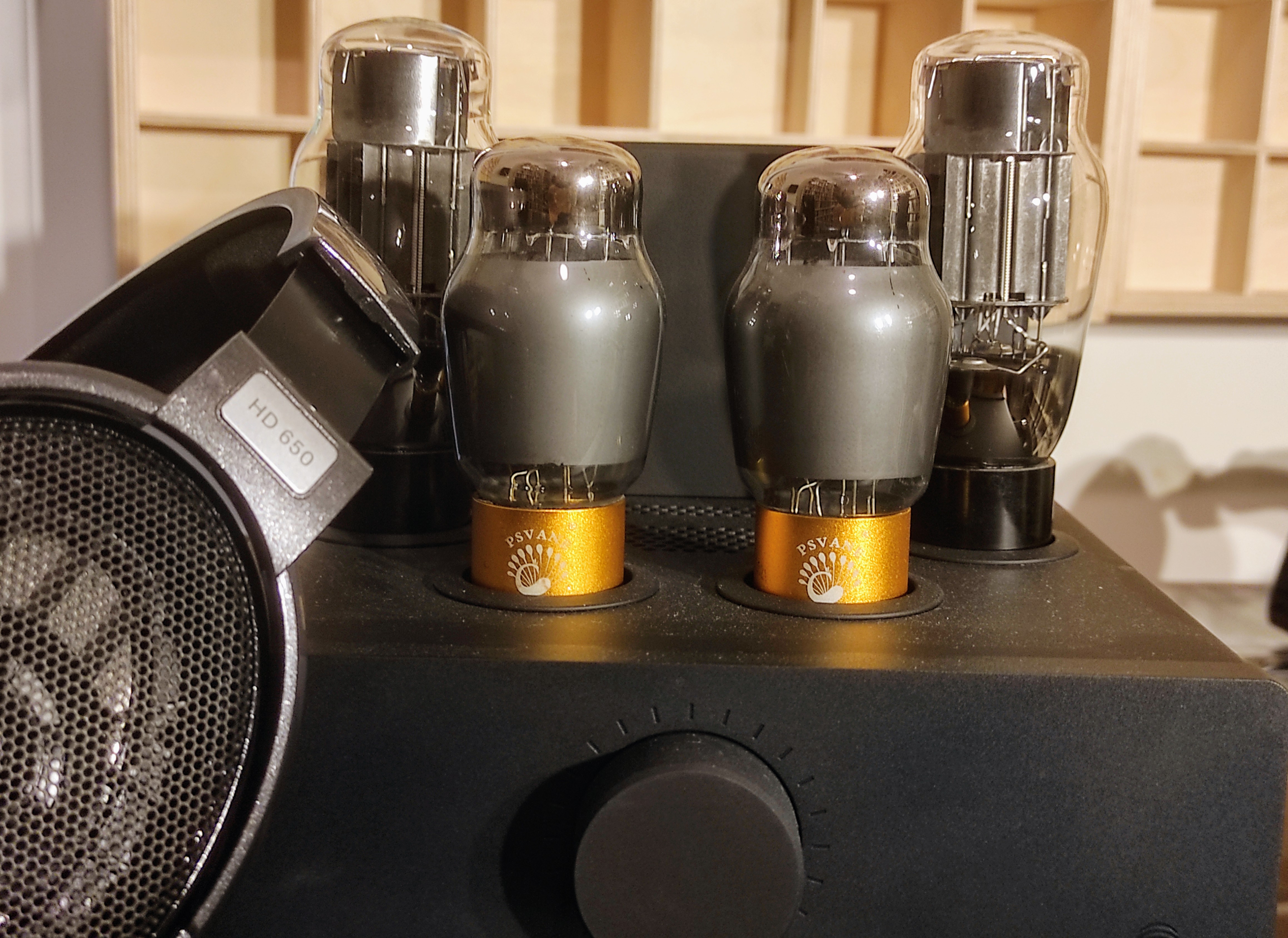 We have auditioned the Euforia with various headphones like the venerable Sennheiser HD650 (after all this is an OTL amp) , the HD660S , Focal Clear OG and of course the mighty Meze Empyrean as the Euforia is rightly considered one of the few available OTL amps to properly match them.

Various sources were used but most part of the listening was conducted with our Denafrips Dacs , the top shelf Venus II and the entry level Ares II that beats most D/S rivals.
The Venus is the resident high end DAC and the Ares II is a long term loaner kindly provided by the official distributor KVS Audio.
You can find the whole Denafrips line here KVS Audio 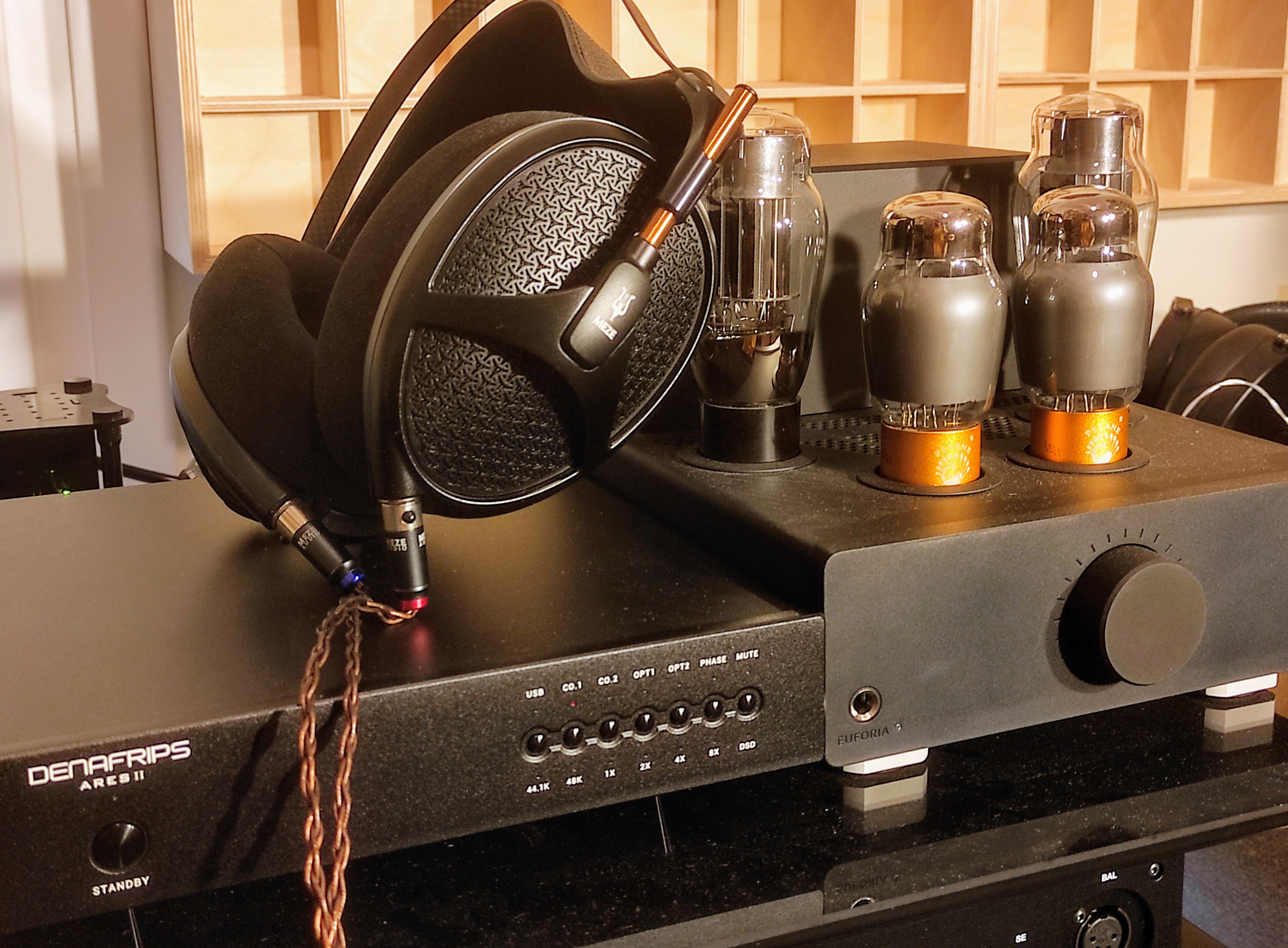 The amplifier arrived one hazy afternoon , already burned in and we sat down to give it a brief listen time that was eventually expanded long after midnight
That first encounter proved to be a quintessential example of what was about to follow in the next days, giving up all other priorities in favor of the enchanter Euforia.

Euforia possesses that magic ability to cause one’s mind to travel into fairy lands , since it can , both literally and figuratively , captivate the listener’s senses.
It is indeed worthy of its name , merely on the grounds that it truly creates a state of ultimate euphoria.
One could possibly refer to it as the famous mythical creature , the siren , with the exception of not having to plug one’s ears with wax , frankly , it is the exact opposite , one can freely hear it loud and clear.
Do no fret ! Let it beguile you.

OK it’s time to stop waxing poetic and cut it to real listening impressions.
Let’s start by making clear to the reader that the amplifier has immaculate technical features not far away from the best solid state siblings.
What was conspicuous and made the best of impressions was the utter absence of audible distortion , even when the volume was set close to the maximum at least with well matched high impedance headphones.
A crystal clear and dead silent background and last but not least , the exemplary linear tonal balance fully extended at both edges of the spectrum.
The amplifier is effortless and steadily paced , fast and precise with ample dynamics and driver control which results in tight and full bodied bass response.
It is detailed but not tedious and it offers a faithful and realistic rendering of all the audio variations of the program with exemplary rise and fall.
At the same time it is the touch of the tube that adds that magic powder to transform mere sounds into real music but without altering neither colouring the sound.
It’s about harmonic wealth and timbre which is as natural as it gets , giving musical instruments a surprisingly analogue tone close to reality.
Note by note listening to it , one could feel all the little details gathering together to paint the big picture which lavishly emerges as a three-dimensional and holographic entity with exemplary time and space allocation as was captured by the sound engineer.
There is no point talking here about soundstage because this is a unique and unprecedented audio experience able to simulate speakers, a rare trait that one could hardly find in headphone listening.

The Euforia is one of the rare OTL valve amplifiers to partner well with planar magnetic headphones as long as they are of high to medium sensitivity and with flat impedance curve across the frequency range.
As always low impedance dynamic drivers are not the best match and the amplifier feels at home with high Z headphones. 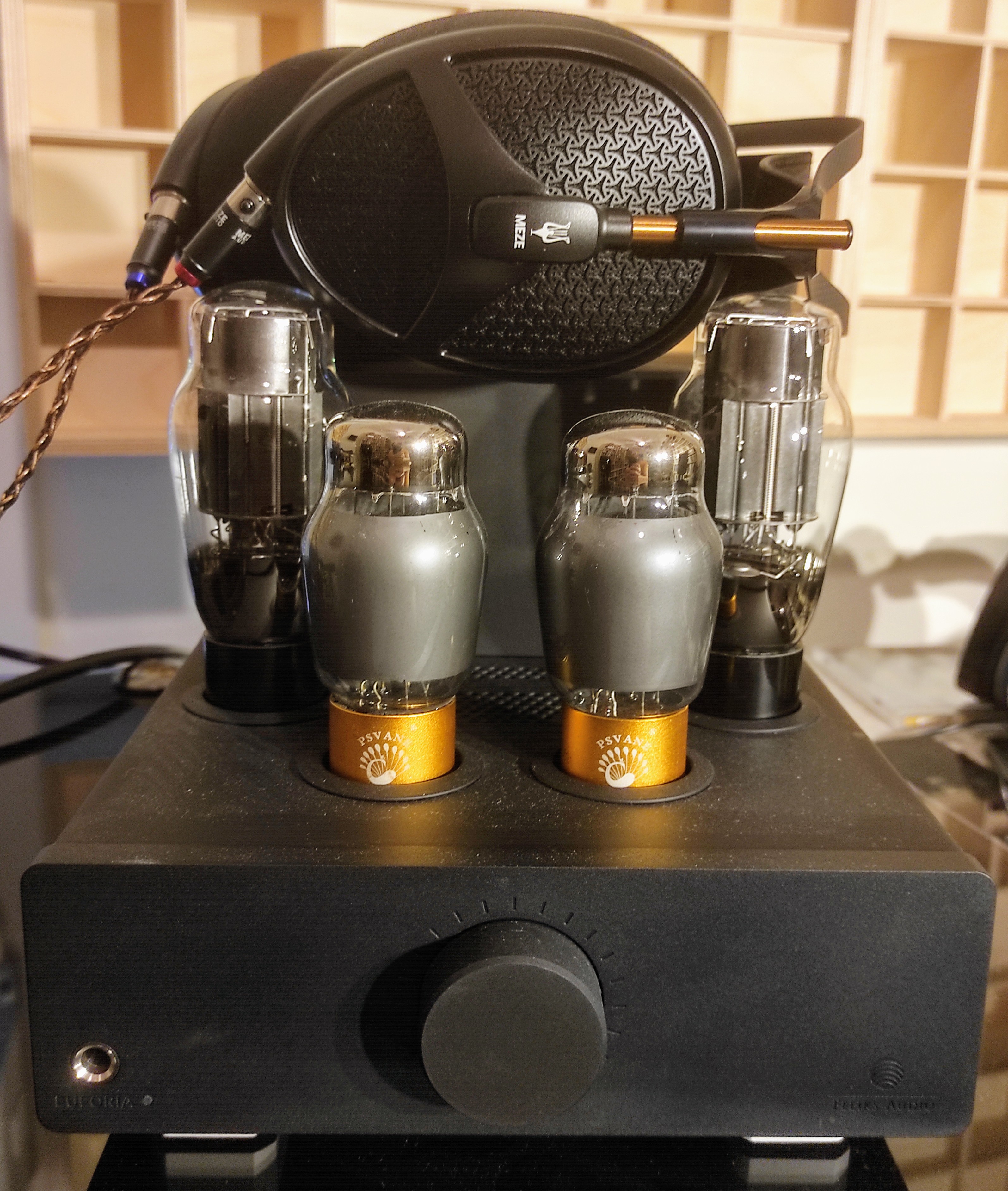 It is to be understood that while the Euforia can be enjoyed with various headphones it should mate with headphones and sources of the highest quality in order to fully unfold it’s virtues.

A few notes about the crossfeed function which is rather interesting but it is not always effective or pleasing but it may suit particular music genres and specific headphones or user tastes.
Anyway it is nice to have but certainly not a major selling point.

Sometimes words do appear unable and insufficient to describe sound impressions of a truly remarkable audio gear.
Feliks Audio Euforia is one of the best OTL amplifiers available with a sound performance akin to a rare musical instrument rather than an electronic device.
Paired with the right source and headphone the musical experience
could only be compared and contrasted with a high end speaker sound system at a fraction of the cost.
Hence , if your like to listen to your music as close to reality as it gets then you should be definitely bound to obtain it.
And if you do so then rest assured that the way you used to listen to music will be positively altered forever.
It is indeed a valuable and unique piece of art.