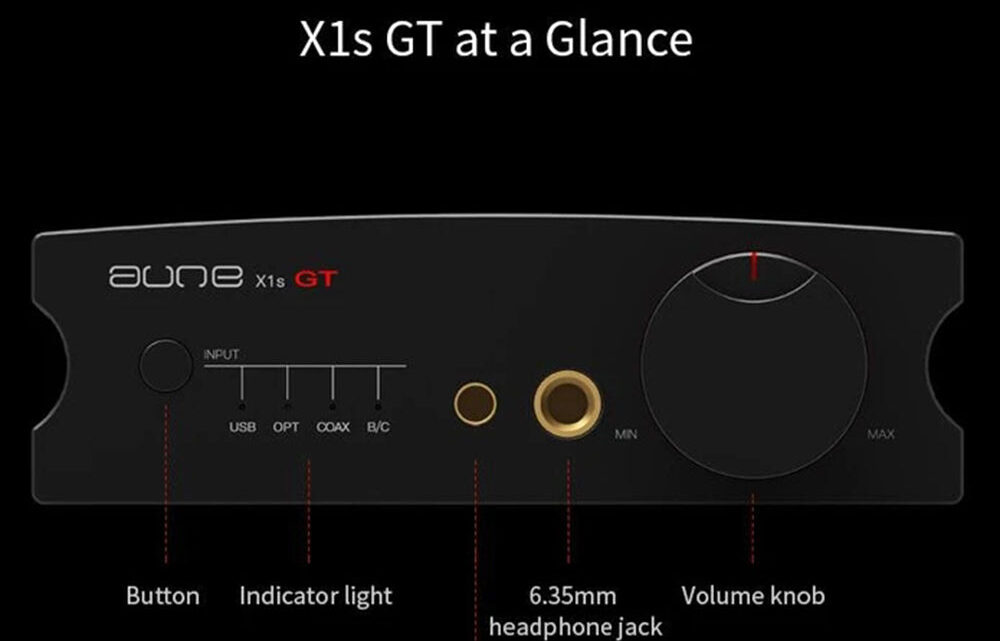 Cons: – Not the last word in bass control and detail retrieval
– No sampling rate display
– Single ended headphone output is rather underpowered
– Some PLL locking issues
– No gain switch

The review sample was kindly provided by Aune in exchange for my subjective and unbiased review.
The selling price in Europe is €289 and you can buy it using this not affiliate aune-store.

Aune is a pioneer brand with a huge range of desktop as well as portable audio gear.
The latest X1s GT is a revamped version of their classic X1 series of desktop DAC/AMPs, the 8th generation of the same. 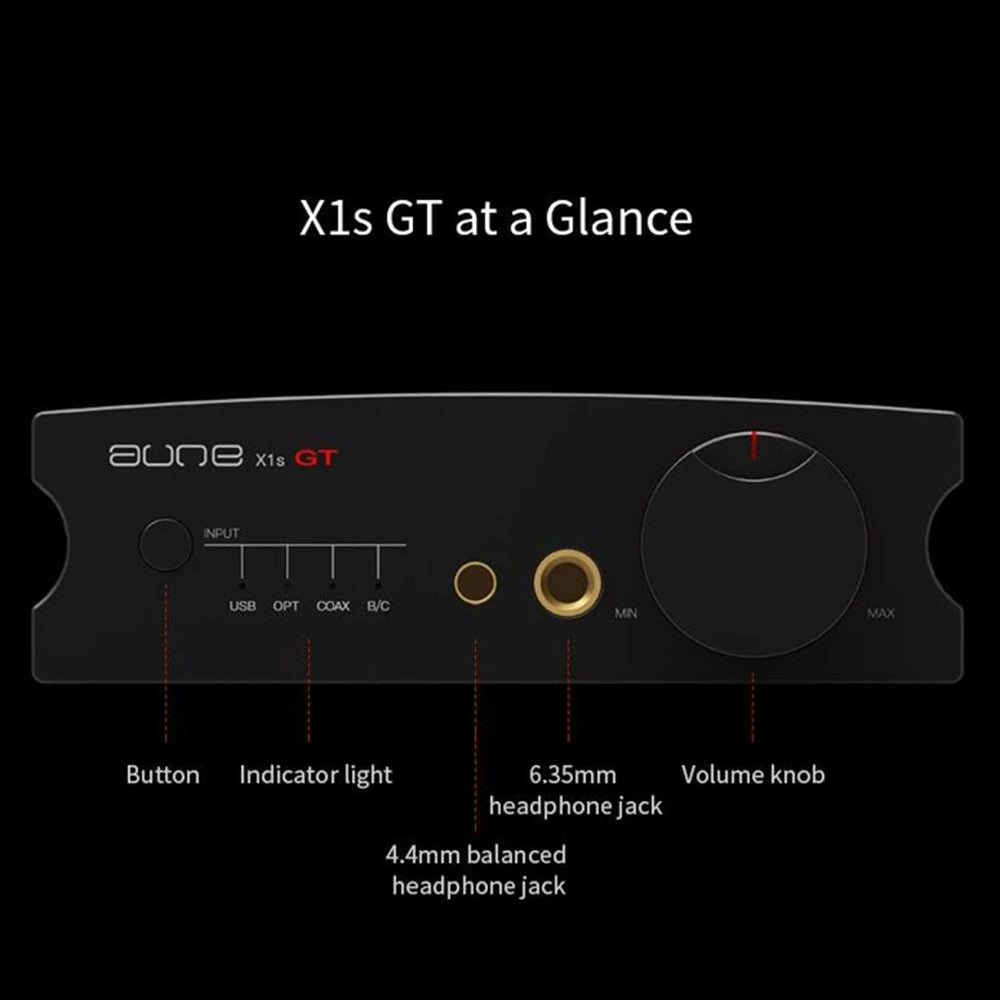 The DAC chip used is the ES9038Q2M which supports all high resolution files, up to PCM 32bit 768kHz and DSD512 via the USB input or 24bit 192kHz and DSD128 from the Coaxial and Optical inputs.

Instead of the seven embedded ES9038 low pass filters, the Aune X1s GT has its own specially designed filter modes with Aune’s self-developed algorithm. They feature two modes for general use, and two specifically for headphones.
Modes 1&2 are called standard while modes 3&4 are called pure.
1 and 3 are for general use while 2 and 4 are for headphones. 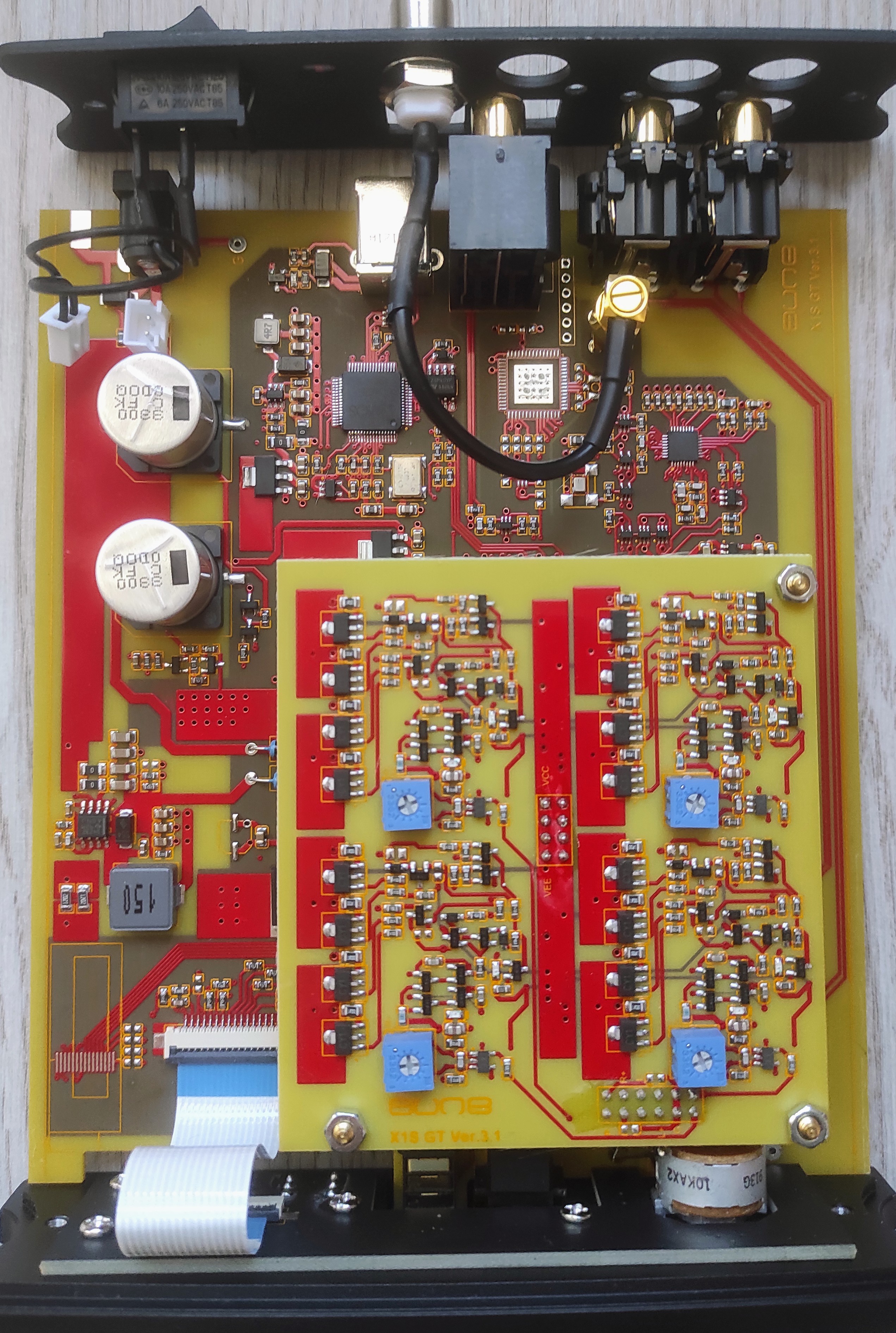 Aune X1s GT features an upgraded version of the company’s classic B1 fully-discrete headphone amplifier circuit.
It uses 4×24 BTJs, 227 components in total and a positive/negative 9v power supply.
With the balanced 4.4mm headphone output, the X1s GT outputs up to 1200mW/32Ω of power while the single ended output is rather underpowered, maxing at 320mW/32Ω.
There is no gain switch and volume is adjusted by the means of a high quality potentiometer. 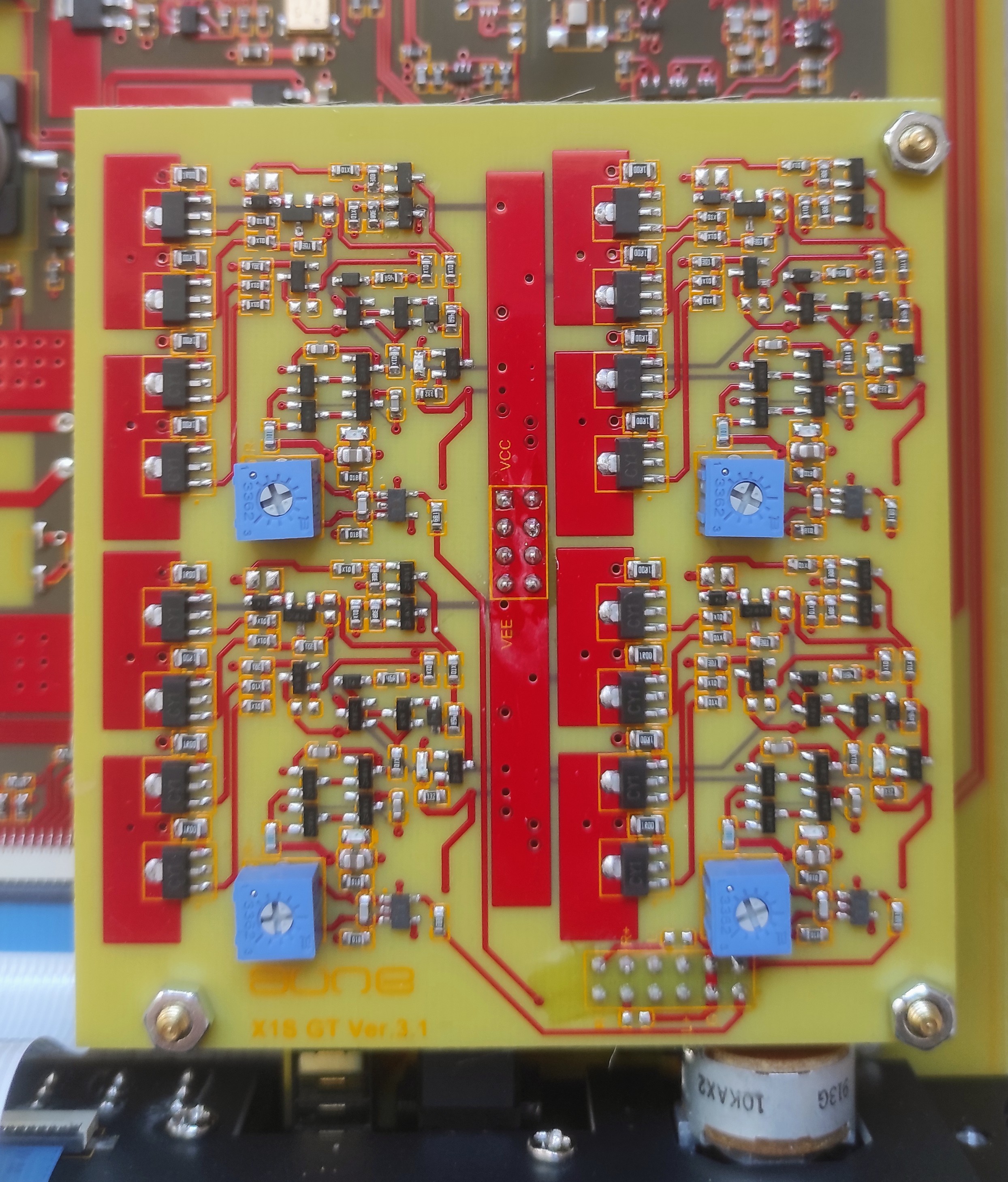 The unit is powered by an external power adapter.
Aune instead of providing the usually cheap generic power adapter, they have partnered with the famous brand MEAN WELL to include a specially designed low noise power adapter. 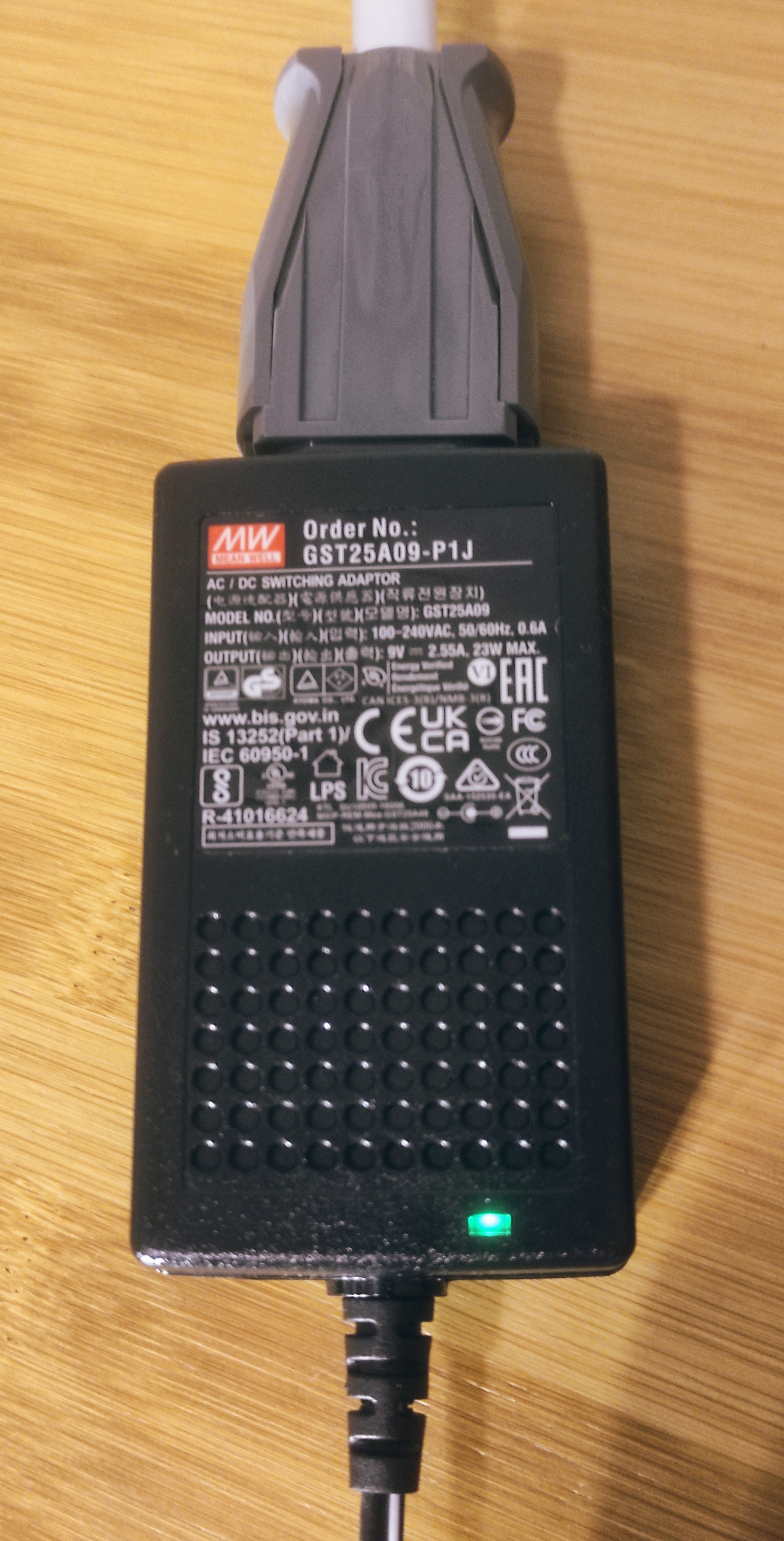 The X1S GT has three digital inputs (coaxial, optical and USB), and a BCN input for the external clock.
The USB input in addition to the Windows OS, it also supports Android devices and can be effectively used with smartphones and tablets.
There are two headphone output sockets, one single ended 6.35mm and another one, balanced 4.5mm. There are also two separate RCA analog outputs, the first one is fixed, bypassing the potentiometer for purer sound and the second one is variable for use with powered monitors and power amplifiers. 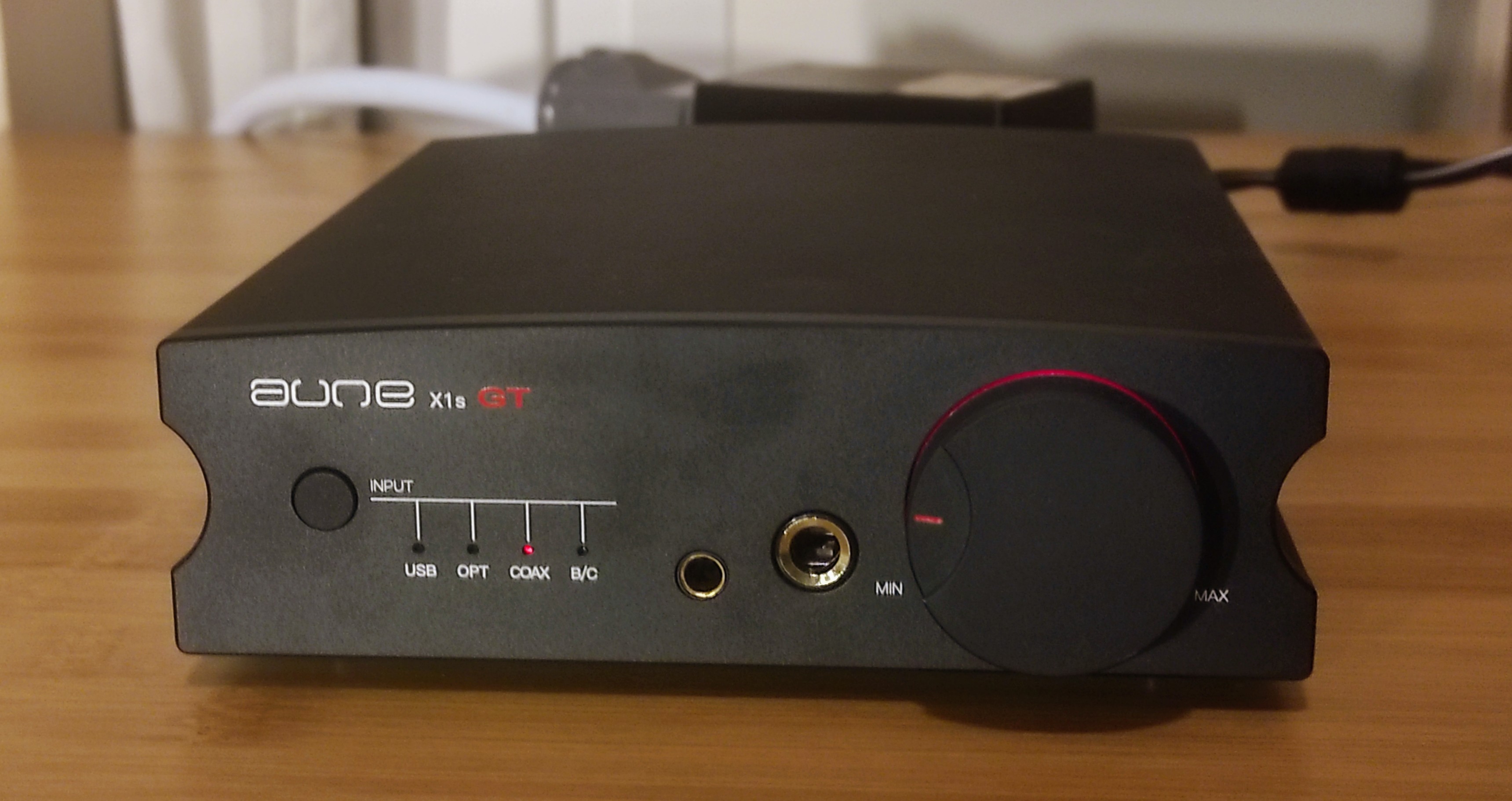 The power ON/OFF switch is located at the back of the unit while the front face houses the control button and the potentiometer which is illuminated by a circular LED around it.
The light stays constantly red and it doesn’t change color according to the sampling rate which isn’t displayed by any other means.
There are four small LEDs which are located next to the control button that are used to indicate the selected input method and the filter mode.
Pressing the button once will cycle through the digital inputs while a short double click will cycle through the available digital filters.
The filter choice is not displayed constantly so the user can’t tell which one is selected and must rely on his memory. 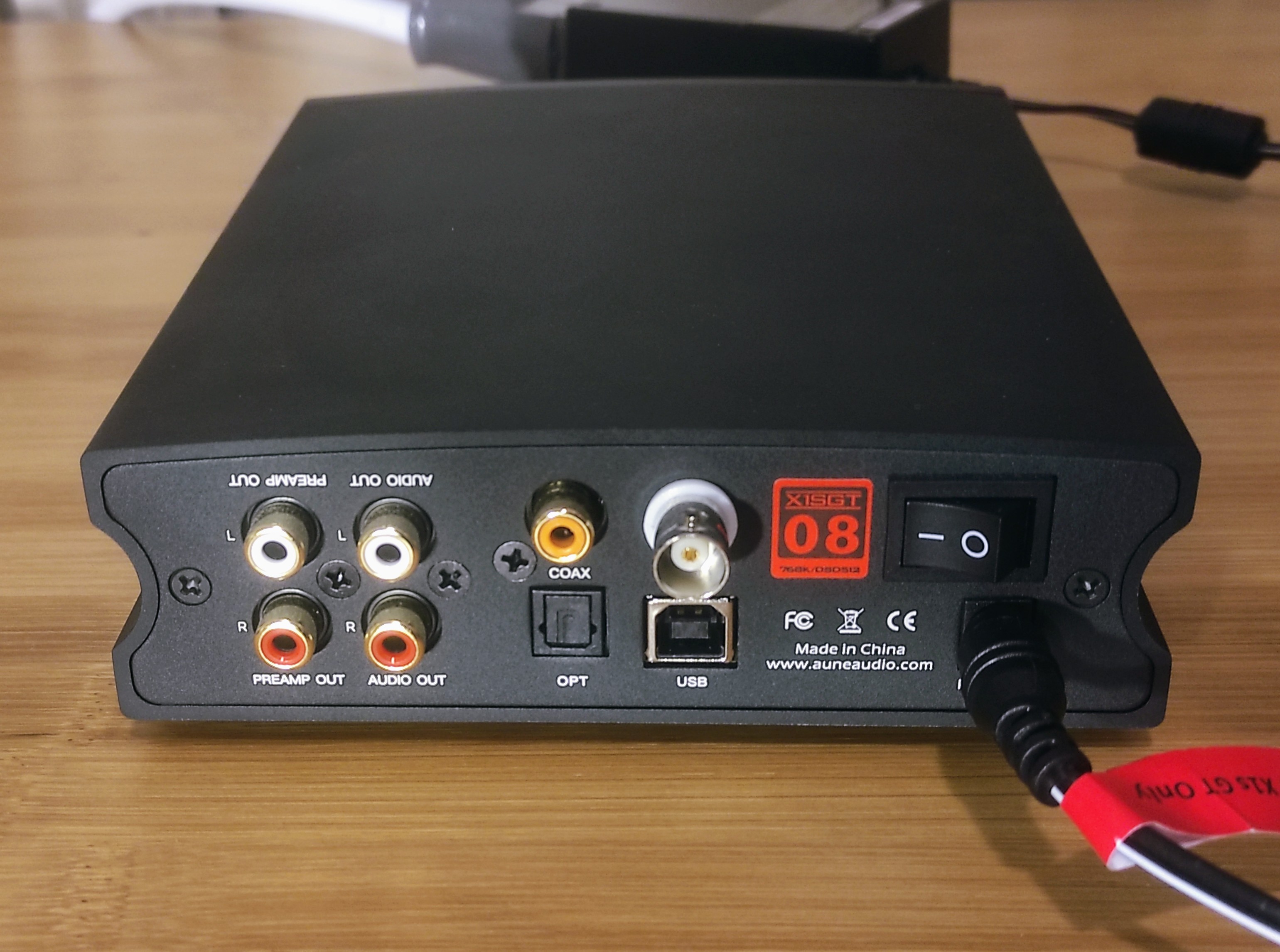 The X1S GT features the classic Aune, Arc-shape design which is quite modern and aesthetically pleasing.
The chassis is made from aluminium with excellent build quality and a rather flimsy painting.

There is a chance that the X1S GT while connected through the USB input might skip a few milliseconds of a track when you start playback or while listening to a playlist with various tracks of different sampling rates.
This is not something related to the other digital inputs.

This is an issue related to the PLL and it is happening only through the USB input and while filters 3&4 are selected.

Filter mode 1&2 also have very good PLL performance and the sound quality won’t be degraded. It’s just that if you pursue higher sound quality, you have filter mode 3&4 to choose from.

Here follows an official explanation from the Aune engineer.

“The protection of filter mode 3 and 4 is necessary, especially when the sampling rate is being changed – the PLL changes frequency until it’s stable, during which, once random fluctuations happen, the DAC might output a big sound. Volume ramp up is to protect the devices after the DAC. Besides, the X1s GT supports a 10M external clock. If the external clock is warming up or the transmission cable is not well connected, within the time we set the X1s GT can react to that timely and close the output. At the moment, the output time we set for volume to rise from mute to 0dB is 800ms. Most music files have that room in the beginning. The X1s GT uses XMOS working in asynchronous slave USB mode, so to positively delay the computer end player data output, another big buffer needs to be added. Although the volume thing will be solved, there will be extra delay, like when you are watching a video, the sound might not match the picture.
Making full use of the PLL offers a high quality clock, which noticeably improves the sound quality, but at the same time, it will lose some speed of lock.
Filter mode 1 and 2 don’t have that issue.
The USB receiving delay is within 2ms.
Most players have that buffer length setting, which is to avoid system crashes caused by frequent song changing. Usual setting is 500ms~1500ms.
So it is possible to adjust the buffer length and avoid the issue.”

As per usual practice I left the X1S GT playing music for about 150 hours, prior to listening tests, without monitoring the progress.
I have used various headphones, from the similarly priced HiFiMan/Drop 5XX and Sennheiser HD660S to the Focal Clear Mg and HiFiMan Arya Stealth plus a couple of earphones like the FiiO FA7S and Dunu Falcon Pro.

The balanced output of the X1S GT is powerful enough to drive most of the headphones, with authority, good driver control and headroom to spare.
The amplifier stage is remarkably good, without audible distortion until you reach the upper limits.
The only case that you are going to reach for a more powerful, external, amplifier is if you own difficult to drive planar magnetic headphones.
But then you should probably seek for a different solution right from the beginning because, in my opinion, the X1S GT actual value is when used as an all in one device.
Powerful may be but the noise floor is still very low so it is pretty suitable for higher sensitivity earphones as long as you don’t crank the volume to ear bleeding levels.
The single ended output is quite underpowered and the X1S GT really shines from its balanced output. 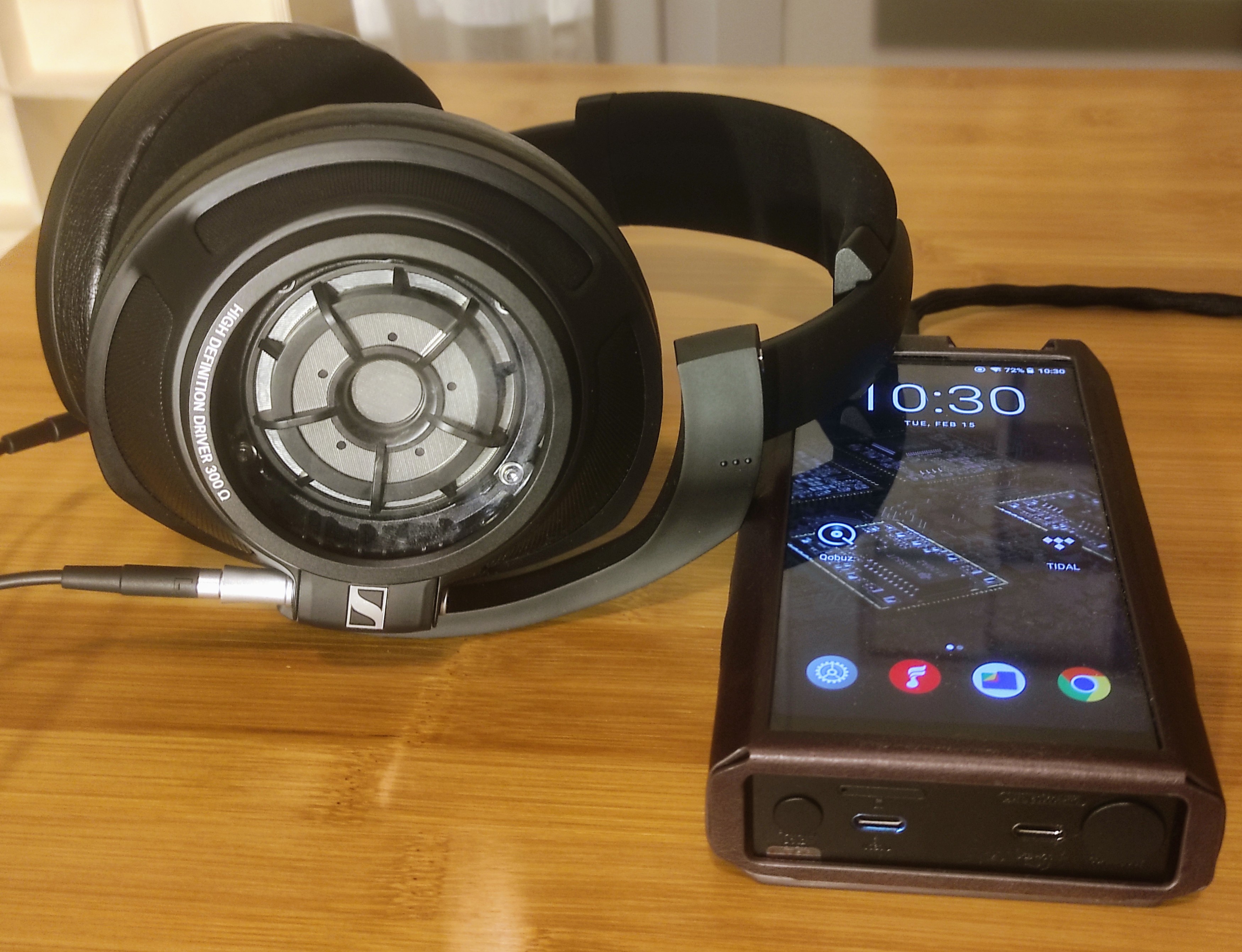 The Aune X1S GT is musical and engaging yet not lacking in transparency and fidelity.
Frequency response is flat and well extended without any measurable or audible deviations from the reference linearity.
Yet the sound is by no means sterile or boring, the device is carefully tuned to be natural sounding and exciting with all kinds of music while it was a great match with all the headphones I used.
What stood apart were the textural qualities and the unique timbral characteristics.
It is pretty obvious that Aune has made a great effort in making the X1S GT sound as close to reality as possible and they have greatly succeeded in doing so.
I would attribute the excellent results to the combination of the discrete amplifier stage and the custom made digital filters.
I have tested a lot of gear with the ES9038Q2M DAC chip and the X1S GT is one of the least digital sounding ones, with minimal glare and absent of any treble harshness surpassed in this regard only by much more expensive products.
Indeed, the carefully implemented digital stage is feeding the custom made transistor amplifier, resulting in a full bodied, lush and well rounded sound with colorful harmonies and lifelike timbre.
Bass is full, visceral and hard hitting, it can truly impress the listener with it’s contrasted dynamics.
Not the last word in control and timing, maybe a touch loose but still fast enough and well defined to handle everything with ease.
Mid-range is intoxicating, open and spacious with a velvety smooth texture, natural timbre and a fine articulation.
Solo voices are cunning while instruments of all kinds blend together in a communicative interplay.
Treble is smooth and easy going yet not deprived of energy although not as extended and agile as someone would expect from an ESS DAC chip.
This doesn’t mean that it is lacking in airiness or detail retrieval and the truth is that you are not going to miss a lot while at the same time you are going to appreciate the different type of approach where the details are presented as an integrated part of the music rather than being projected in front of it.
Still if an analytical and brighter approach is more to your liking then there is a chance that you might not like the X1S GT. 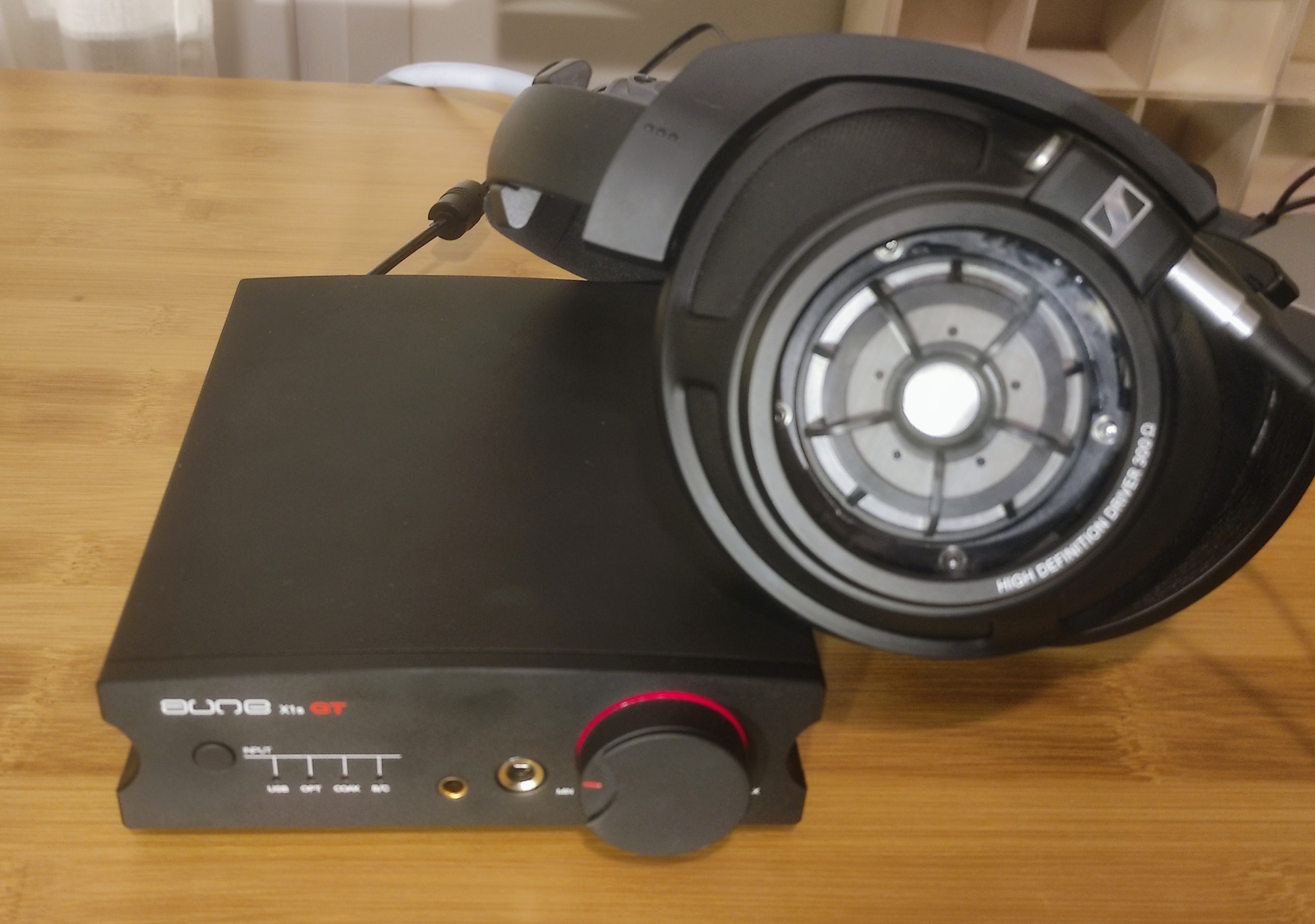 Another striking effect that adds greatly to the naturalness of the sound is the textural evenness throughout the whole frequency range.
It is common for budget priced gear to exhibit some kind of unevenness regarding the overall textural balance of the sound with some loss of body weight and a faster decaying speed while climbing up the frequency ladder. This is something not true for the X1S GT which sounds absolutely balanced and with excellent coherency from top to the bottom.

The sound stage is well extended, quite open and spacious with sufficiently accurate positioning and good holography.
Highly communicative, the Aune X1S GT did a great job in preserving the ambience of recordings like in the following example where you can hear all the natural reverb of Berlin’s Evangelisch-Lutherische Gemeinde “Zum Heiligen Kreuz” while enjoying the exceptionally natural timbre of the solo violin. 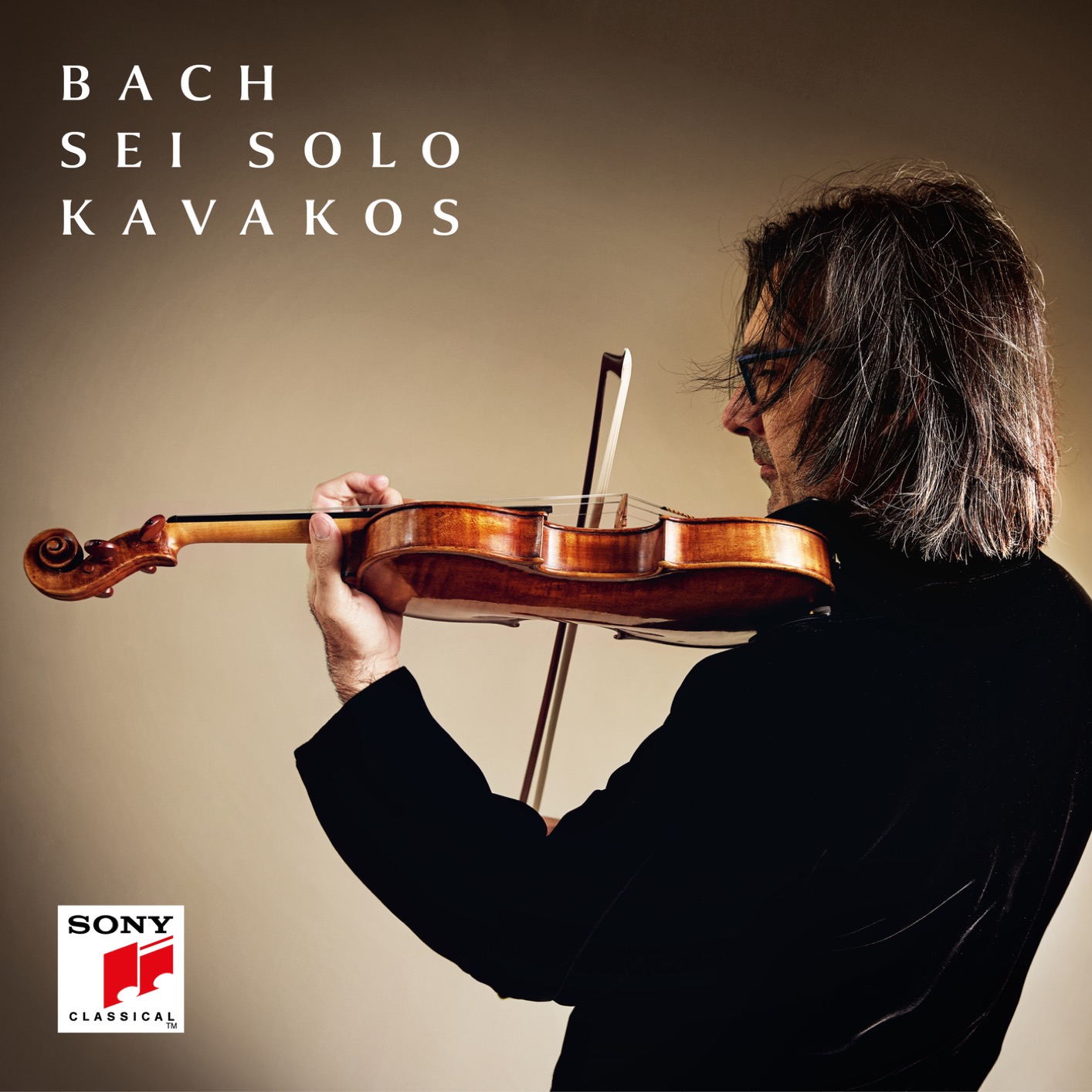 This is a function certainly worth mentioning because the sound of the analog line output (fixed or variable) is of great quality, retaining all the excellent sound characteristics.
A great option for driving your powered monitors or substitute as a standalone DAC in a budget oriented 2 – channel speaker system.
The X1S GT is a great budget standalone DAC and should not be treated solely as a DAC/amp combo unit.

If I was to judge the X1S GT purely on sound quality criteria, then it would certainly be a five star rating thanks to the excellent, highly musical yet technically accomplished performance.
Unfortunately there are some minor – non sound related – issues that would not allow for the full rating.
If Aune could fix the PLL sync problem and have included a gain switch and some kind of sampling rate display then it would be perfect.
But then again life is too short to worry about stupid things and it would be a serious mistake to skip this excellent sounding DAC/amp just for this minor issues.