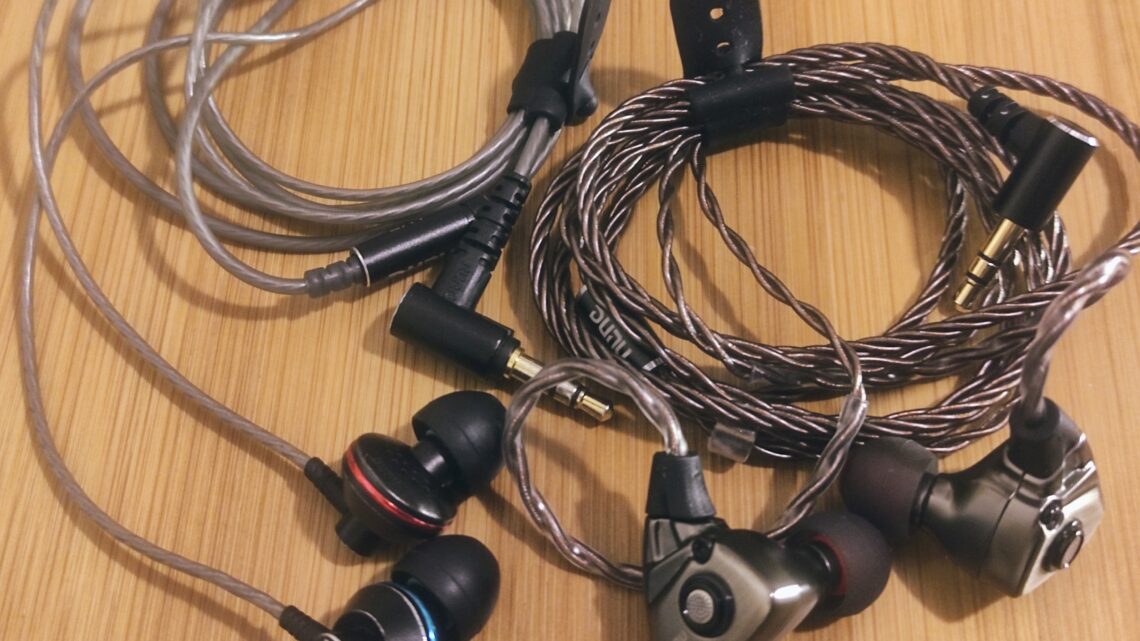 The rise of the Titans

Cons: – Upper – mids / treble can get a touch hot
– Rather lean and not as full bodied
– Slightly lacking in dynamics
– Soundstage is one – dimensional
– Cable is thin and gets tangled

The sample was kindly provided free of charge in exchange for my subjective and unbiased review.
The selling price is $79.99 and you can buy it directly from DUNU online shop by using this – non affiliate – link.

The DUNU Titan 1, disguised as FiiO EX1, was one of my first and most beloved iems.
It is one of the few earphones that didn’t end up in the classifieds, it has proven to be very durable and I am still using it for phone calls. 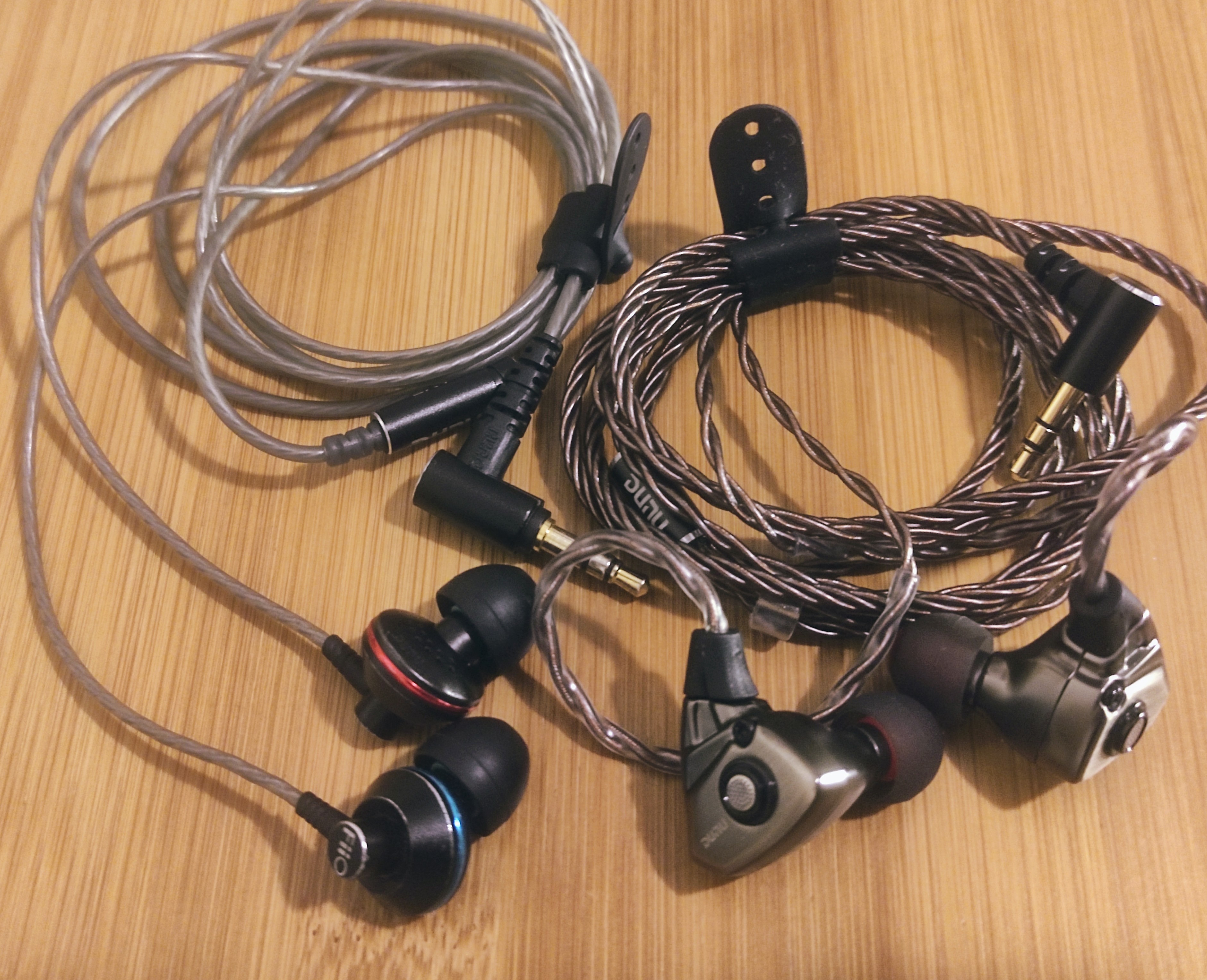 Fast forward to the present and the brand new Titan S reboots the classic and much acclaimed Titan series that established the DUNU as one of the best iem manufacturers from China.
For the first time ever an entry level wired earphone from DUNU has an over-ear wearing style with a bold new cyberpunk-inspired design language, and an all-new driver. 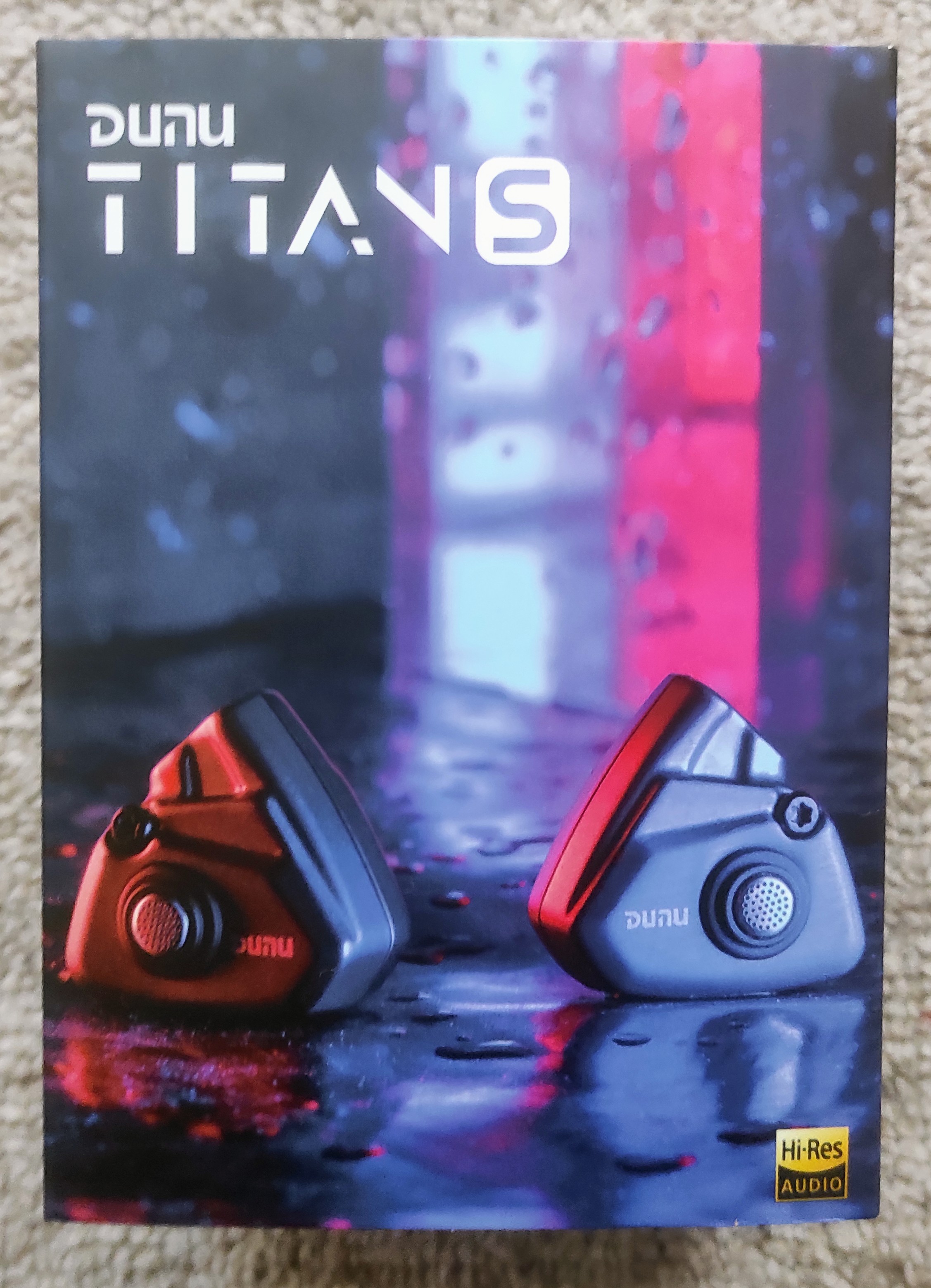 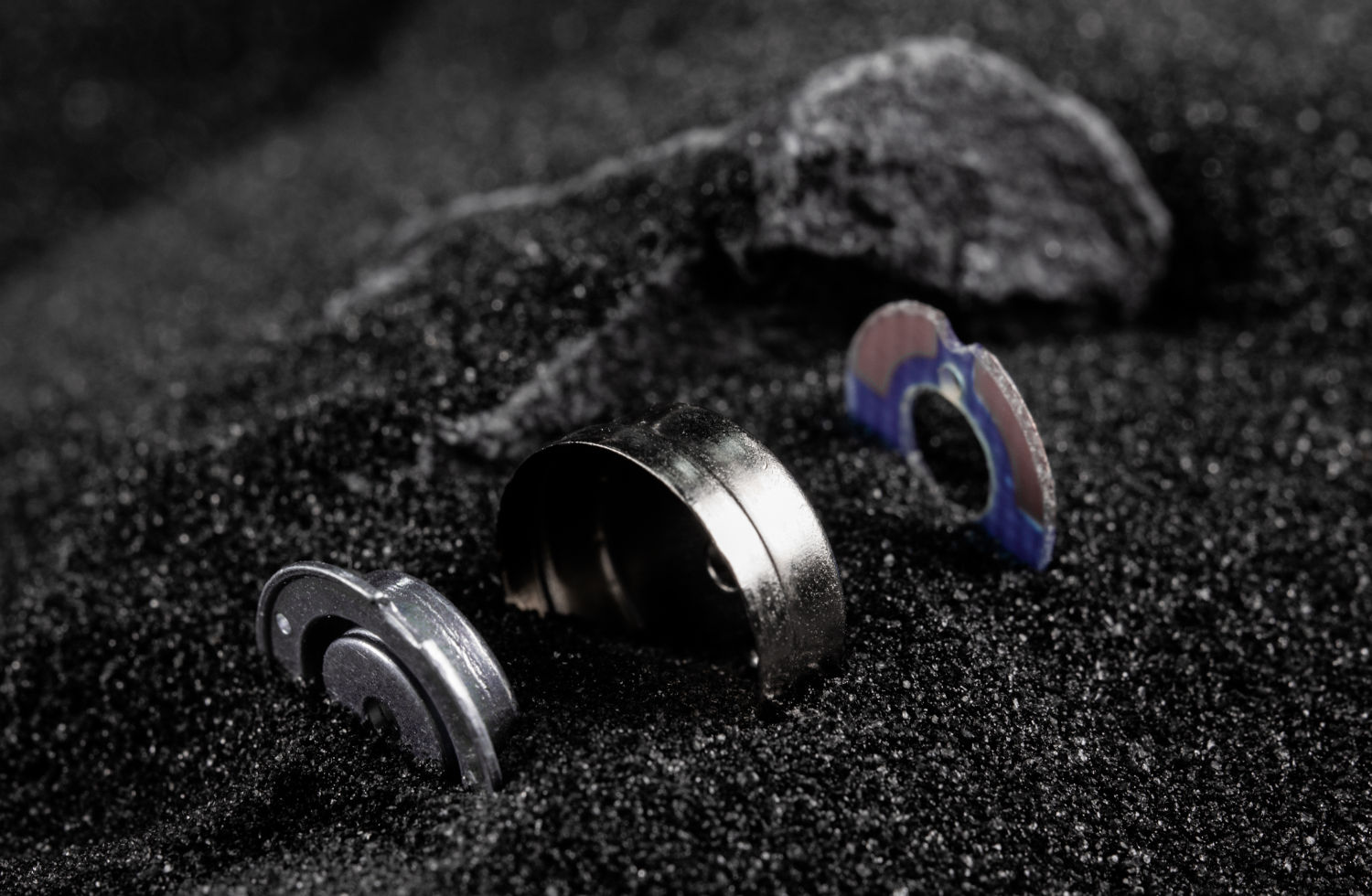 DUNU is well known for its high-quality cable offerings.
They have included a monocrystalline, copper and silver-plated copper mixed cable with a 3.5mm termination plug.
For the first time, DUNU has featured the 2-pin connector.
The cable itself is of good quality, lightweight and soft but a little thin.
Microphonic noise is moderate and it has a tendency to get tangled a lot.
The 2-pin connectors are well made, sturdy and seem to be very durable. 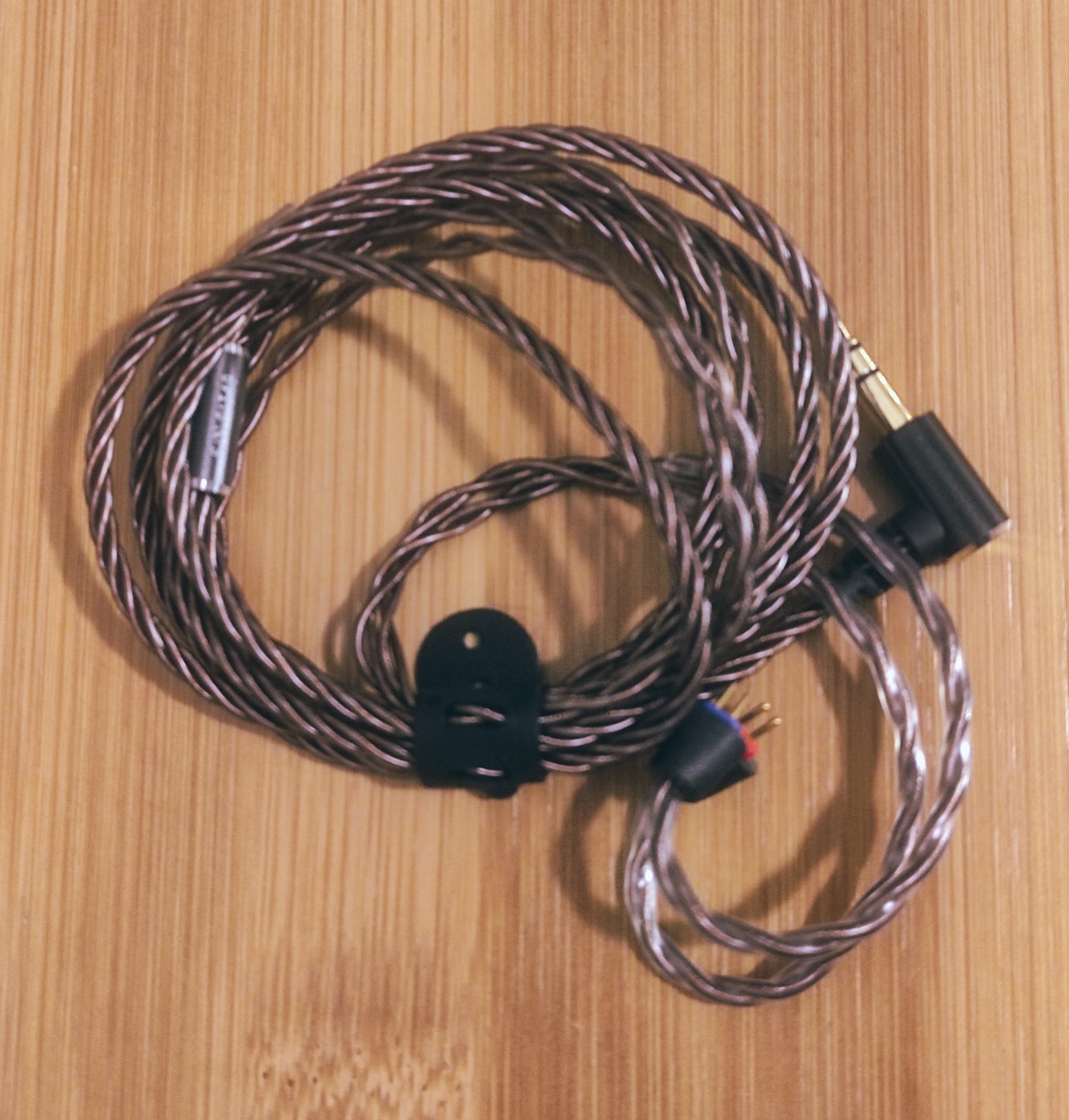 Build quality is excellent, the Titan S is well constructed and a pleasure to handle.
The appearance is cyber – punk as the company claims.
I don’t know what cyber – punk is but I do know that it looks beautiful with a modern, minimal and rather futuristic design. 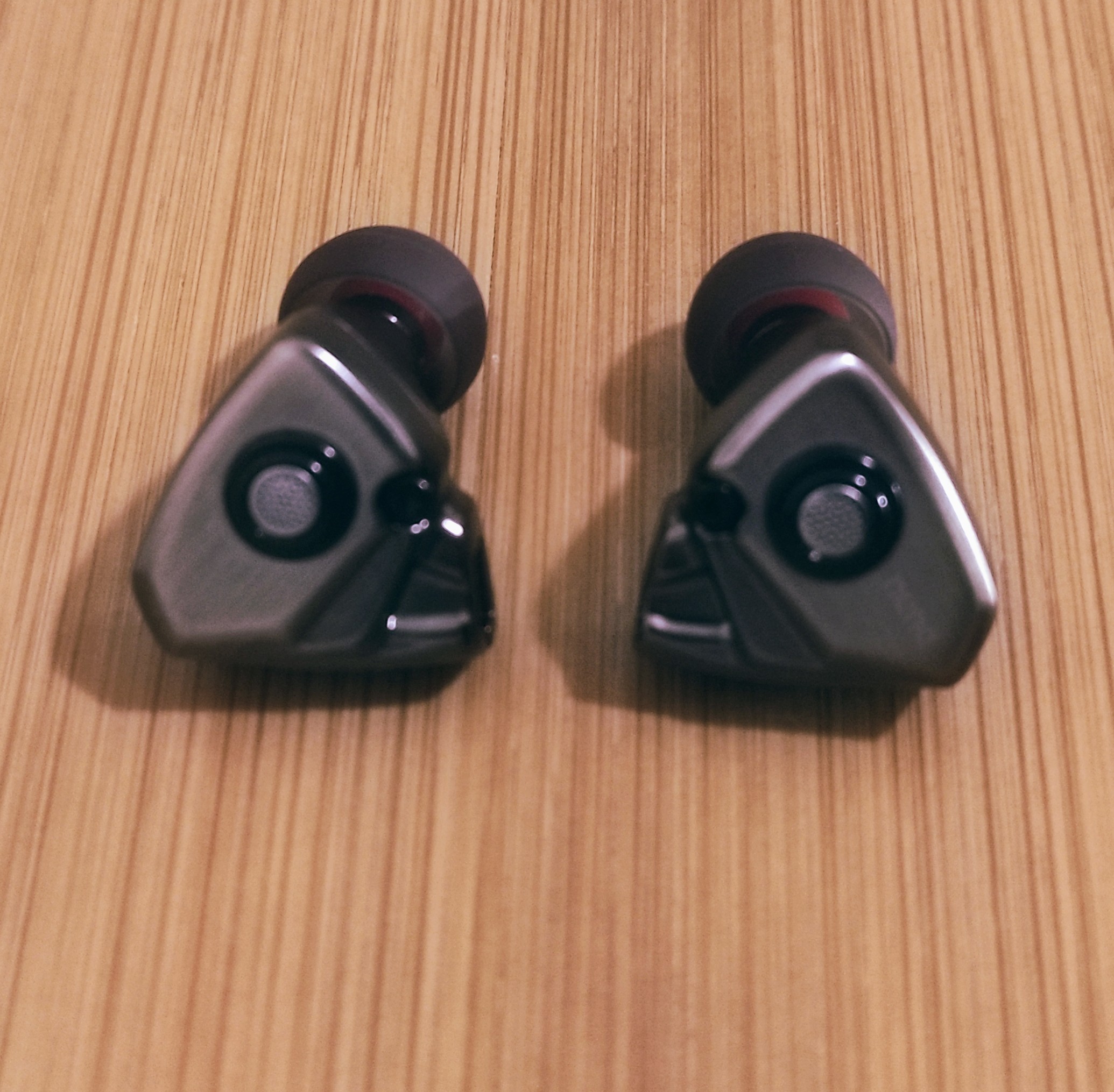 The Titan S, is plain and simple, so comfortable that you are going to forget wearing it.
They fit tightly, stay at place and are suitable for long term use without causing any kind of discomfort.
Due to the vented design of the Titan S, sound isolation is good but not the best although I haven’t experienced any serious issues while using them in moderately noisy environments.

The Titan S comes bundled with three different types of silicone ear tips each in three sizes (S,M,L).
There is also one of the most beautiful and well constructed carrying cases, a rarity at this price point.
The case is like a small wallet, made from faux leather with a zipper and fabric protection at the inside. 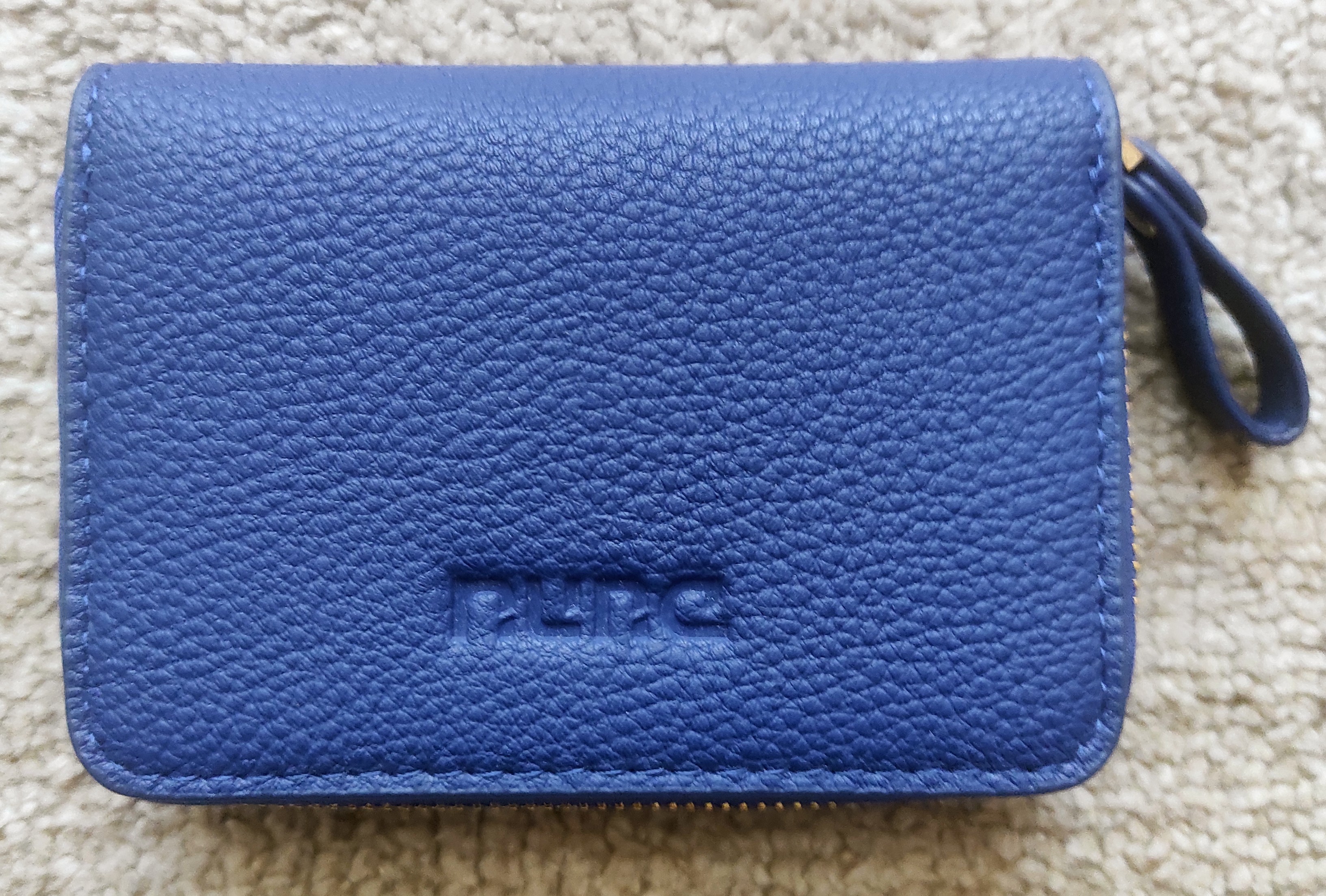 As per usual practice I left the Titan S playing music for about 150 hours without bothering to monitor the burning progress.
With a given impedance of 32Ω and 110dB of sensitivity, the Titan S is pretty easy to drive, you can use it straight from your phone’s earphone output.
But truth is that the Titan S scales pretty well for a budget iem, so the use of at least an entry level USB DAC is strongly suggested.
I used various USB DAC dongles like the iBasso DC05, ddHiFi TC35B Pro and FiiO KA3.
Most of the listening was done with the red colored eartips. 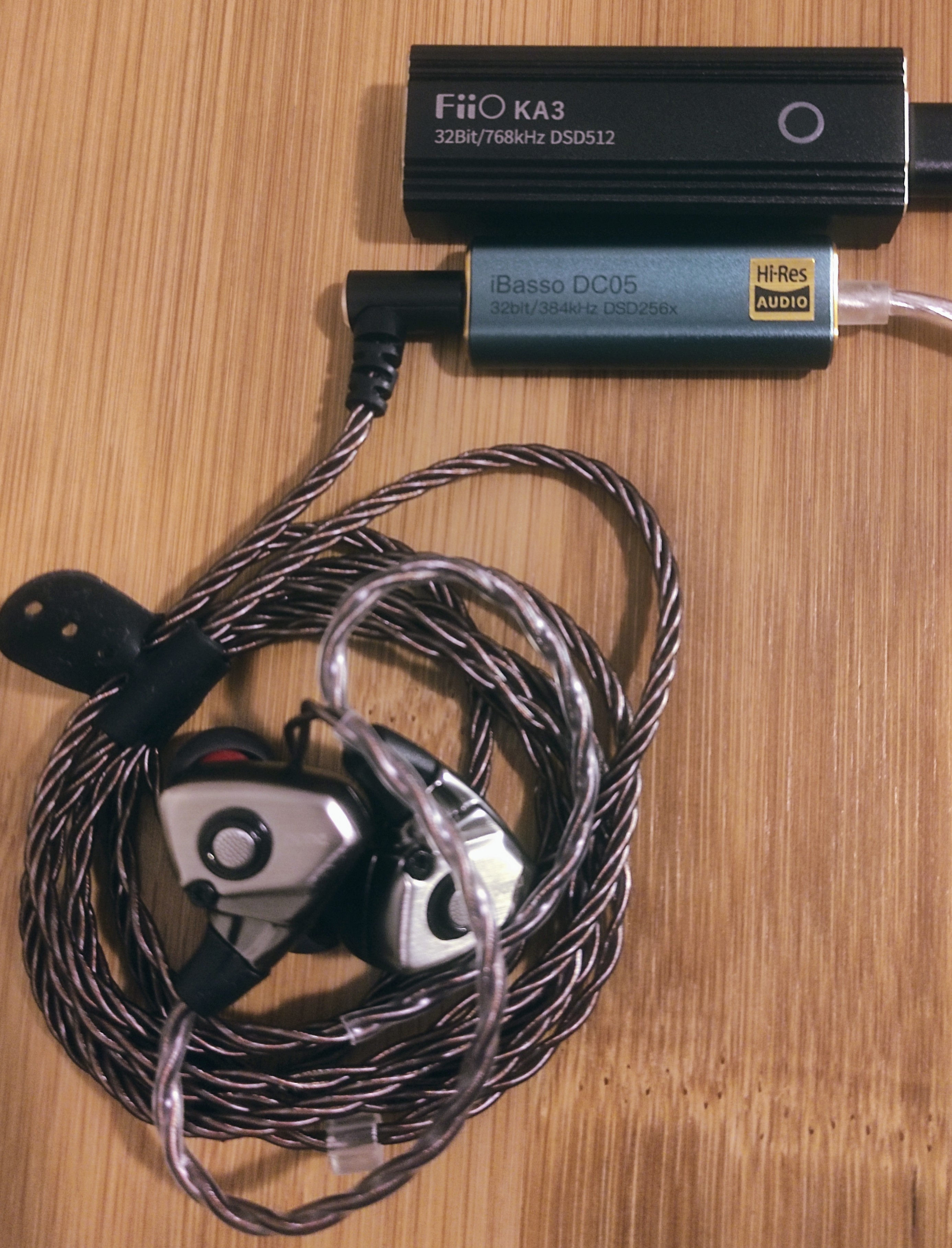 The Titan S has a reference, neutral tuning with a mild upper – mid / treble emphasis while it exhibits top notch clarity with excellent resolving ability, making for an earphone that is equally suitable for casual and critical listening alike.
Timbre is mostly natural, instruments and voices are heard almost lifelike but they do have the tendency to become thinner and less weighty while climbing up the frequency range.

Bass is slightly raised above the point of linearity but without any given mid – bass emphasis, gently downsloping to the mid range.
Sub – bass presence is adequate for all acoustic instruments but it may come as slightly lacking for synthesized tones especially when considering the physical rumbling effect.
The Titan S is pretty competent when it comes to dynamics with a realistic contrast between piano and forte, although the overall presentation is rather lean and dry.
The bass is not as full bodied and weighty but on the other hand is super tight, fast, controlled and well textured.
The bass line stays clear and free of overlapping even under multilayered pieces without any traces of masking between the various instruments of the same frequency family.

Mid range is still flat, with great presence, firm texture and crystal clear articulation.
Clarity is just amazing, voices and instruments sound like shaped diamonds, well defined but not boring or clinical.
The Titan S is quite musical and engaging despite the neutral tuning, an amazing achievement for DUNU who found a way to balance neutrality with musicality in a well blended mix.

The upper mid-range in combination with the treble, gets a well-executed emphasis that adds greatly to the overall sense of definition, making for a luminous, detailed and lively presentation while avoiding becoming overly bright and piercing.
Thus said, the Titan S is not forgiving at all and has an extra bite at the upper parts of the frequency range that can become a little irritating, with certain recordings or at higher listening levels.
Detail retrieval is absolutely perfect, the Titan S is highly resolving and can dig deeply into the recording but again there seems to be a well-determined limit as to where to stop in order not to become intensely analytical.
The soundstage is open and wide, with ample space between the instruments that are precisely positioned and arranged in the horizontal axis but there is a certain lack of depth and dimensionality. 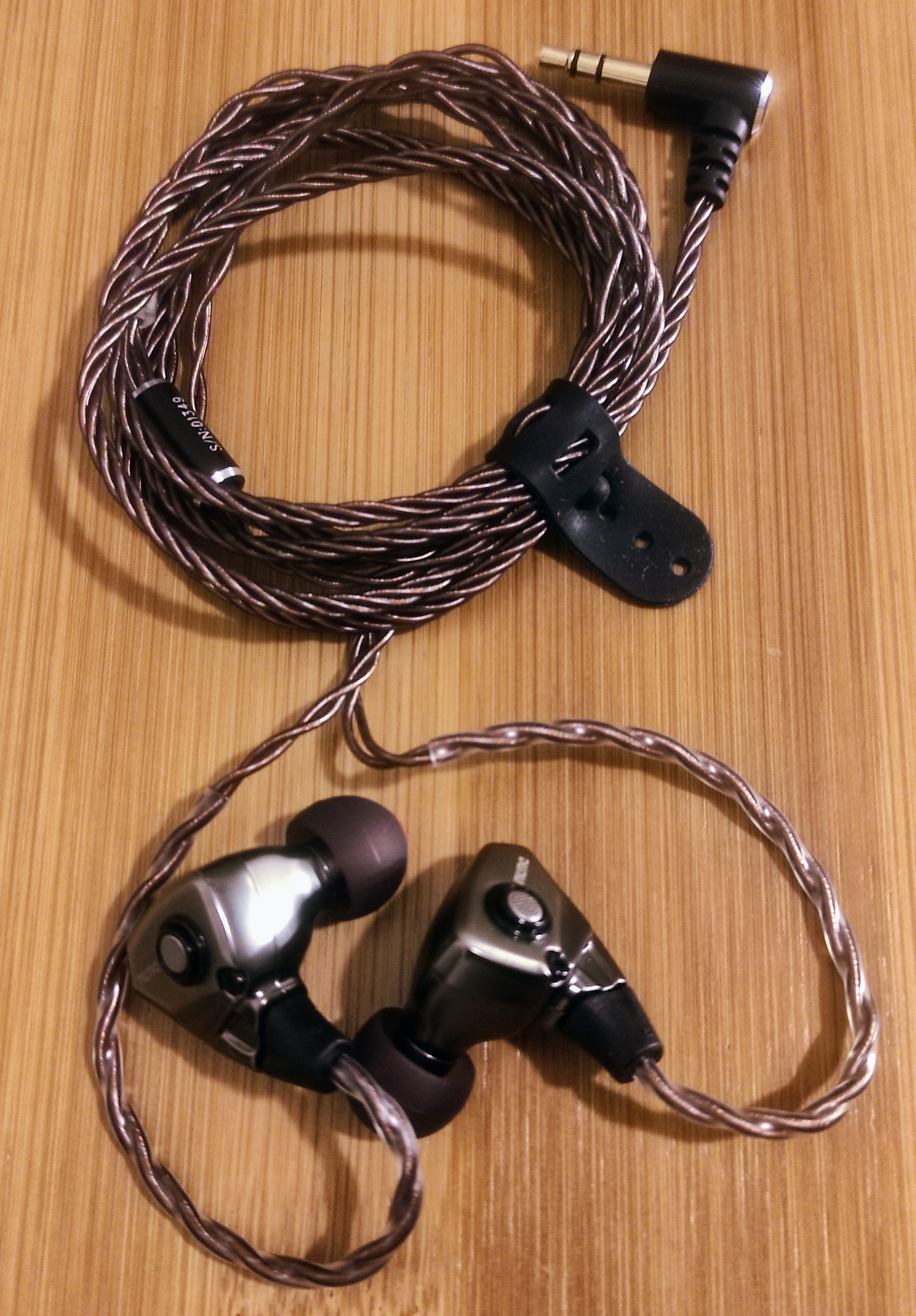 The Titan S is very good for classical music and I greatly enjoyed the last concert of the late Nikolaus Harnoncourt, one of my favorite conductors ever. 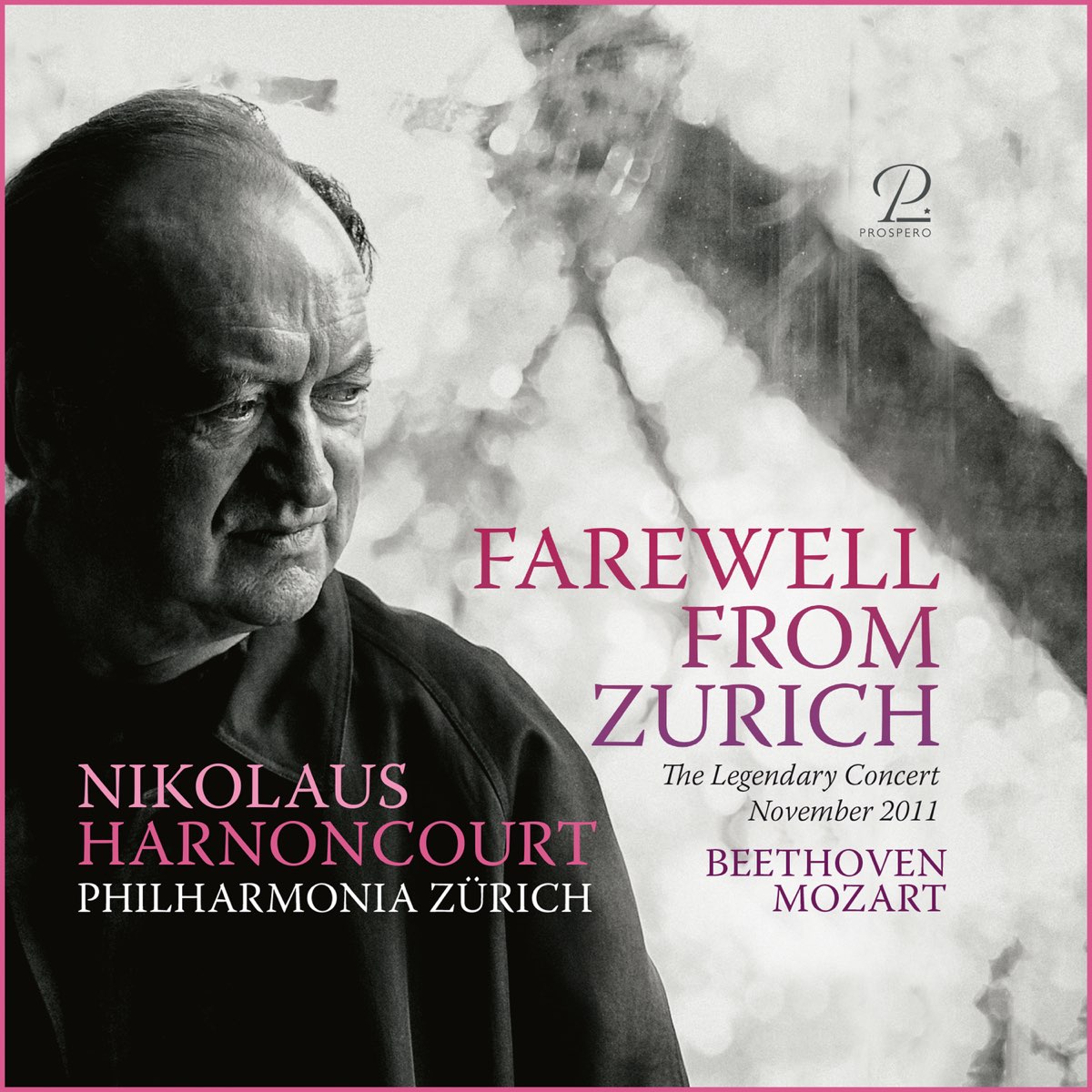 The Aria follows a tuning that is closer to the Harman target with a greater bass / mid – bass emphasis and a subdued upper – mid range.
As such it sounds more warm and bassy but with less extended treble, not pronounced vocals and is missing some sparkle and treble energy.
It is more forgiving to poor recordings and generally speaking more easy to the ear.
The Aria is weighty with thicker notes, more relaxed decaying but is also looser on the bass, not as controlled and tight with poorer imaging.
Timbre is slightly more natural in the Aria, especially for the upper – range instruments but on the other hand clarity and detail retrieval are a step behind while the soundstage is more narrow and not as spacious as in the Titan S.
In the end, it is the more neutral, highly technical but still engaging Titan S against the more relaxed and musical but considerably less technical Aria 2.

Vs TinHiFi T3 Plus

The T3 Plus tuning is like a fusion between the Titan S and Aria 2 with a more V-shaped frequency response.
Bass quantity is on the same increased levels as in the Aria while upper – mid range is equally emphasized as in the Titan S.
Strangely enough it sounds slightly brighter than the Titan S and can become more strident at higher listening levels.
Bass is fuller sounding, more visceral with thicker texture and greater impact but at the same time it gets a touch bloated, less controlled and not as clear as in the Titan S.
Technicalities and soundstage are of higher quality at the Titan S which is also more suitable for critical listening vs the more consumer tuning of the T3 Plus. 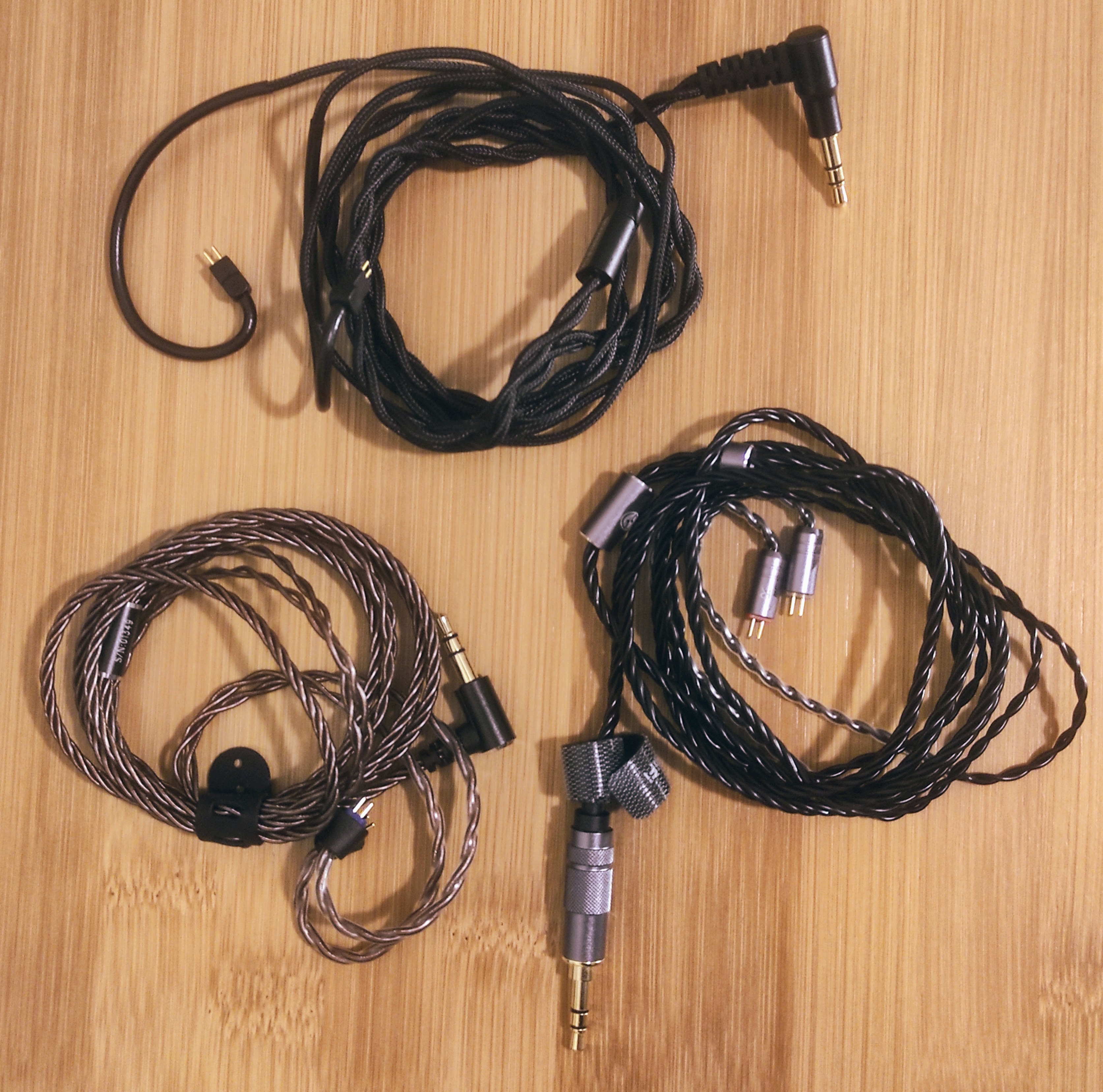 On non audio related stuff, the Titan S has a marginally better cable and the best carrying case by a fair margin, the Aria is slightly more comfortable and discreet while the T3 Plus is the most bulky one.

Three very competent earphones at the sub $100 range with slightly different sound profiles that are going to give you a hard time in deciding which one to choose.

With the Titan S, DUNU has made a brave decision not to follow the V-shaped trend and release something more reference and neutrally tuned, an iem addressed to the minority, despite the possible effect of such a decision on the sales of the brand.
And thus, the Titans have risen from the river of Lethe, led by the most prestigious Titan S, an excellent budget earphone with great technicalities and a well thought tuning that greatly balances neutrality with musicality.