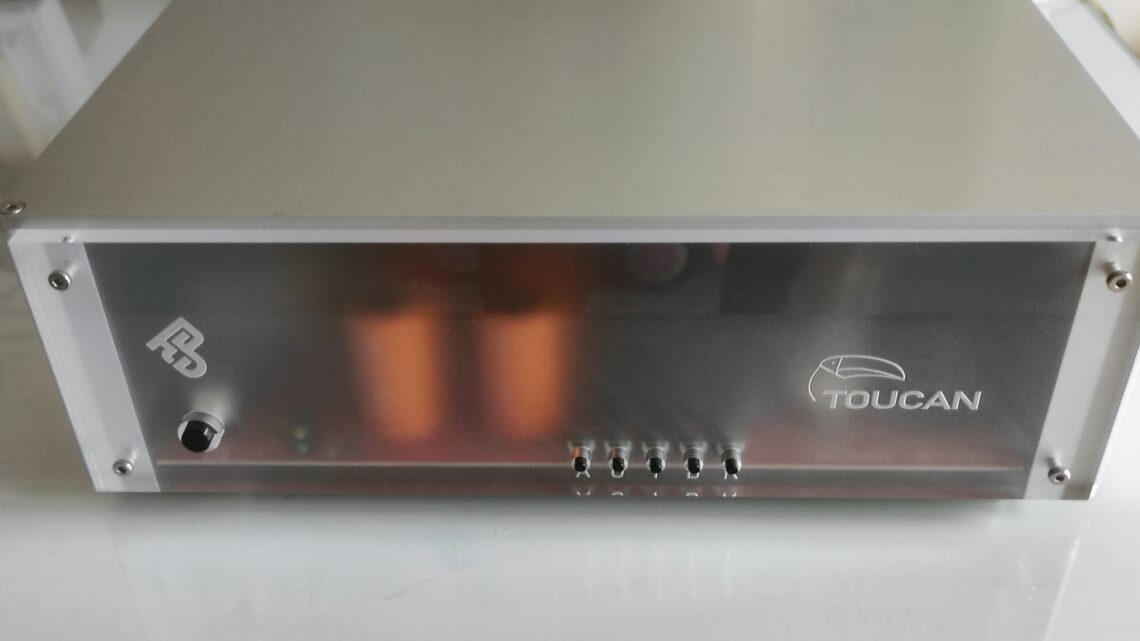 A blast from the past

Recently and after reviewing the exquisite Lab12 dac1 reference, I have become very interested in R2R Non Oversampling DACs with tube buffers.
The Lab12 has become my resident reference DAC but since it is quite expensive, I have embarked into a quest to find less expensive DACs featuring the same design principles.
I know that this kind of sources don’t have the best measured performance but as long as they sound good and can’t hear any negative artifacts, I really don’t care.

One brand that comes to mind when searching for budget friendly NOS tube buffered DACs, is the Taiwanese Mhdt Labs Audio, which is quite famous by now mostly for their Orchid DAC.
The brand is run by Mr. Jiun, who is the lead designer for Mhdt Labs, and they have an extended portfolio of products ranging from the entry level $729 Canary to their $2520 flagship, the Pagoda, a true balanced design.
All DACs feature an assortment of various NOS DAC chips while they incorporate a Tube Buffer with one 5670/2C51 tube.

Mhdt Audio is a subsidiary brand of Mhdt Labs that is run by one of the Mhdt Labs founder members while Mr. Jiun is still the lead designer.
Currently there are three DACs available under the brand name, the $1013 Toucan, the $2172 Oolong and the $2200 Orchid 69SE which is a brand new version of the original, featuring the TDA1541A-S2 and a 6922 tube as the output buffer.
You can find more information here.
The Toucan was kindly provided free of charge in exchange for my honest and unbiased evaluation.
As always the following are just my subjective opinion. 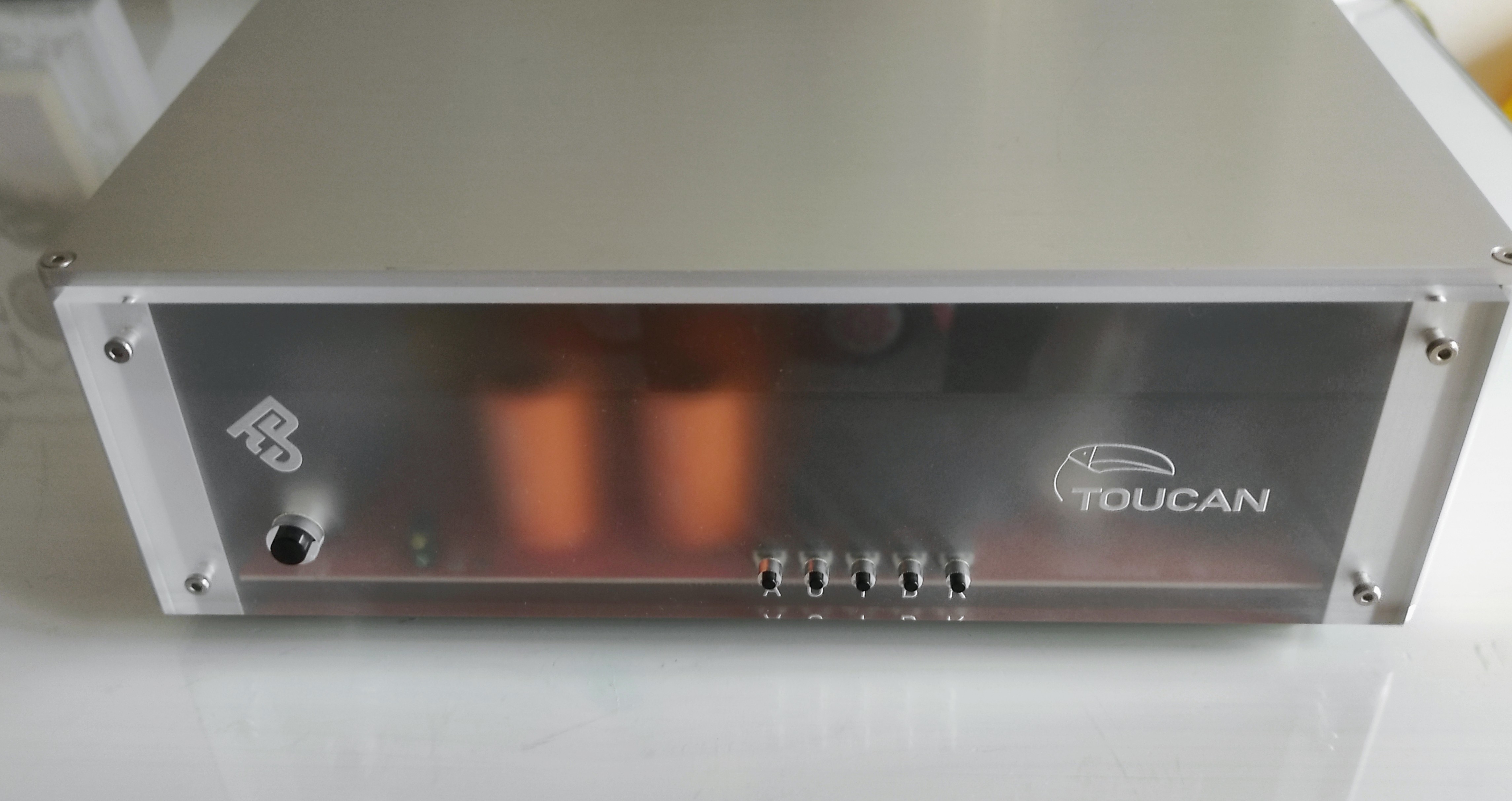 The Toucan DAC is a Non Oversampling, no digital filter, structured DAC featuring one piece of the legendary TDA1387 R-2R DAC chip.
Toucan DAC is capable of up to 24bits/192kHz digital signal inputs yet remains capable of driving the legendary TDA1387 R-2R digital to analog output.
Toucan DAC is capable of up to 24bits/192kHz digital signal inputs but of course it is configured to be 16 bits output due to the limitations of the TDA1387.
The digital receiver is the CS8416 which accepts 24bits/192kHz samples, followed by a rate converter which reduces the depth to 16bit in order to be compatible with the TDA1387.
There are a total of five independent digital inputs; AES/EBU, BNC, USB, RCA and Toslink selectable by the tact switches that are available in the front panel.
The USB input section is working in asynchronous operation.
The I/V stage is discrete ideal transistors with the OPA861 used as transistor and no feedback applied.
The output is tube buffered with one Sovtek 6922 tube installed which can be swapped for all the 6DJ8, 6922 tube families.
Tube rolling is quite easy and the only thing you have to do is to unscrew and remove the lid of the unit.
A low noise, toroidal transformer is feeding the linear power supply which consists of 4×3900μF EPCOS electrolytic capacitors and local regulated supplies for all critical parts of the circuit.
There are also two large and four smaller, film and foil, coupling capacitors which are custom made and branded as Mhdt Audio.

There is a pair of two output impedance resistors just before the analogue line out, one for each channel.
The Toucan is mainly designed for 2-channel stereo systems and is using two such resistors of 470K Ohm value for the best possible performance.
The Toucan is not completely dead silent and using it with some headphone amplifiers might induce a low level white noise.
In this case and in order to lower the noise floor, you can swap these resistors for a 10K Ohm value.
This kind of solution works wonders for headphone amplifiers but it will just slightly affect speaker performance by reducing a little the detail depth and overall dynamics.
Mr. Jiun suggested that according to the intended use you can order the Toucan with either one of the two options mentioned above or even ask for 100K Ohm value for compromised performance between headphones and 2-channel systems. 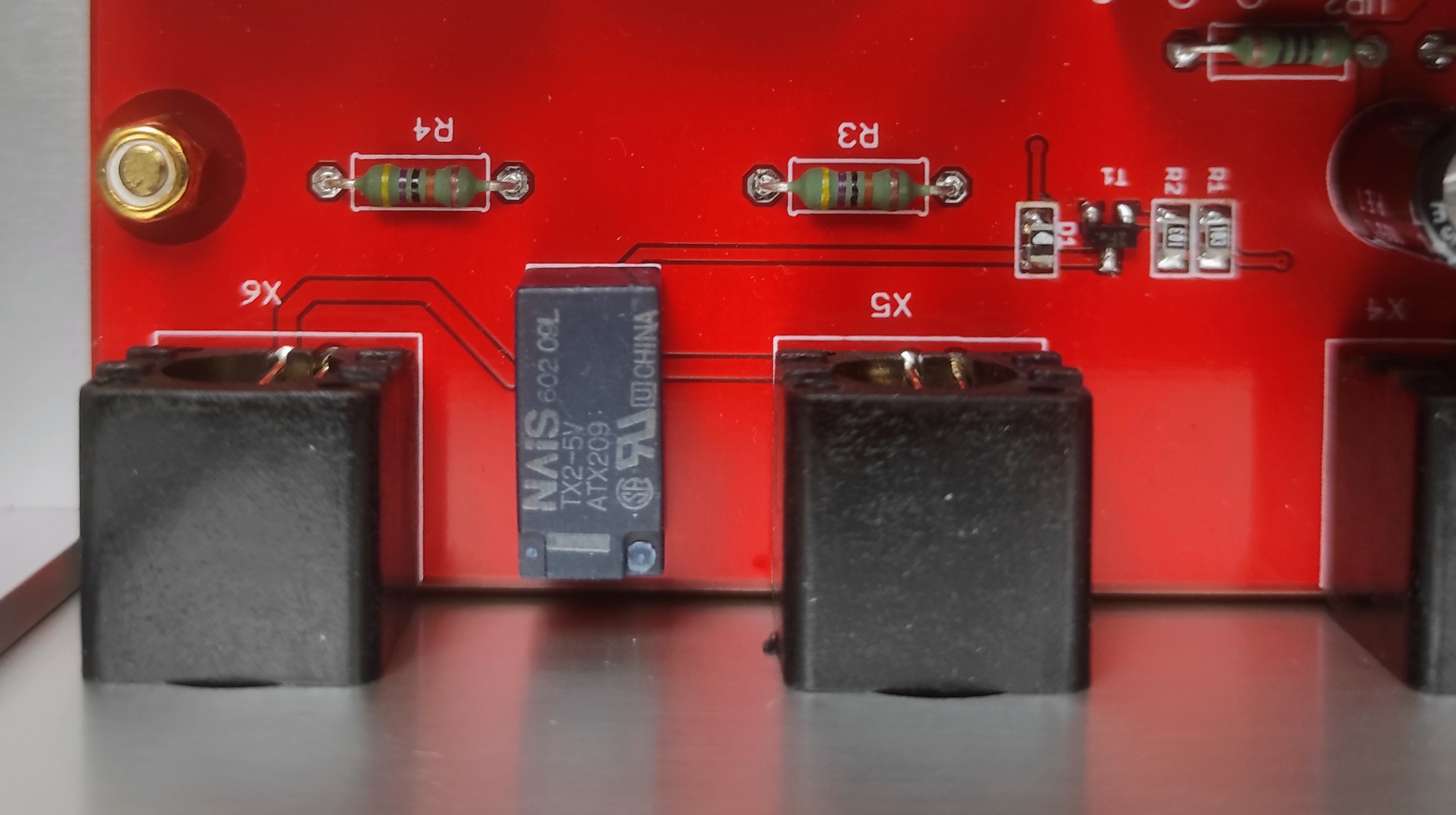 The Toucan is available in a silver only chassis made of thick aluminium with a semi – transparent acrylic front plate which allows for the tube to be slightly visible.
Photos of the Toucan may not come as flattering but actually the design is very beautiful and I like the faint visibility of the orange rectifying capacitors and the glowing tube.
At both sides of the chassis there is cut a huge “MHDT AUDIO” logo which serves as a venting slot.
The dimensions are 280 x 200 x 96 mm and the weight 3.4 kg.
At the left side of the front face there is the ON/OFF push button followed by two function LEDs while at the right side there are five switches that are used for the input selection.
Sampling rate is not displayed and the appearance is pretty neat and minimal.
At the back of the unit there are three extra venting slots, the digital inputs, the analogue stereo RCA output and the power plug. 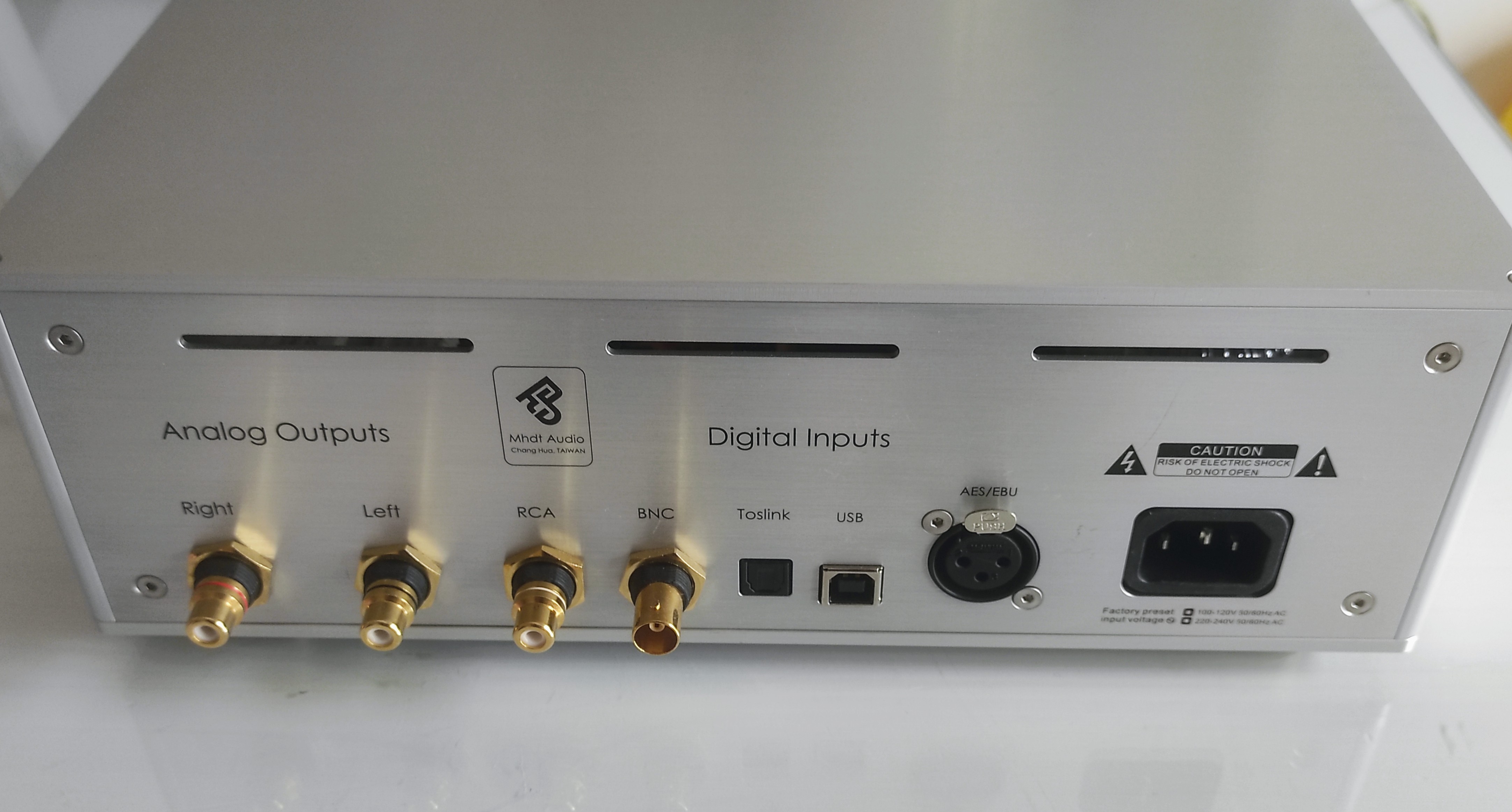 The Toucan was burned for more than 150 hours in order to let the tube and the capacitors settle down.
You must remember that the Toucan needs at least half an hour of warming time before listening to music.

I have tested the Toucan in my main 2-channel system which is located in a dedicated, acoustically treated room and consists of the Audiophysic Step 35 speakers, driven by the Kinki EX-M1 integrated amplifier.
Power gets delivered through two iFi power stations, one for the analogue and one for the digital components.
For headphone duties I mostly used the Violectric V226 and the Flux Labs FA-10 with various headphones, including the Focal Clear Mg and the HiFiMan Arya V3.
The Toucan technical specifications suggest a full scale 2V output but after using it I believe that it is somewhat lower as I had to use more volume on the amplifier to get equally loud with other sources outputting 2V signal. 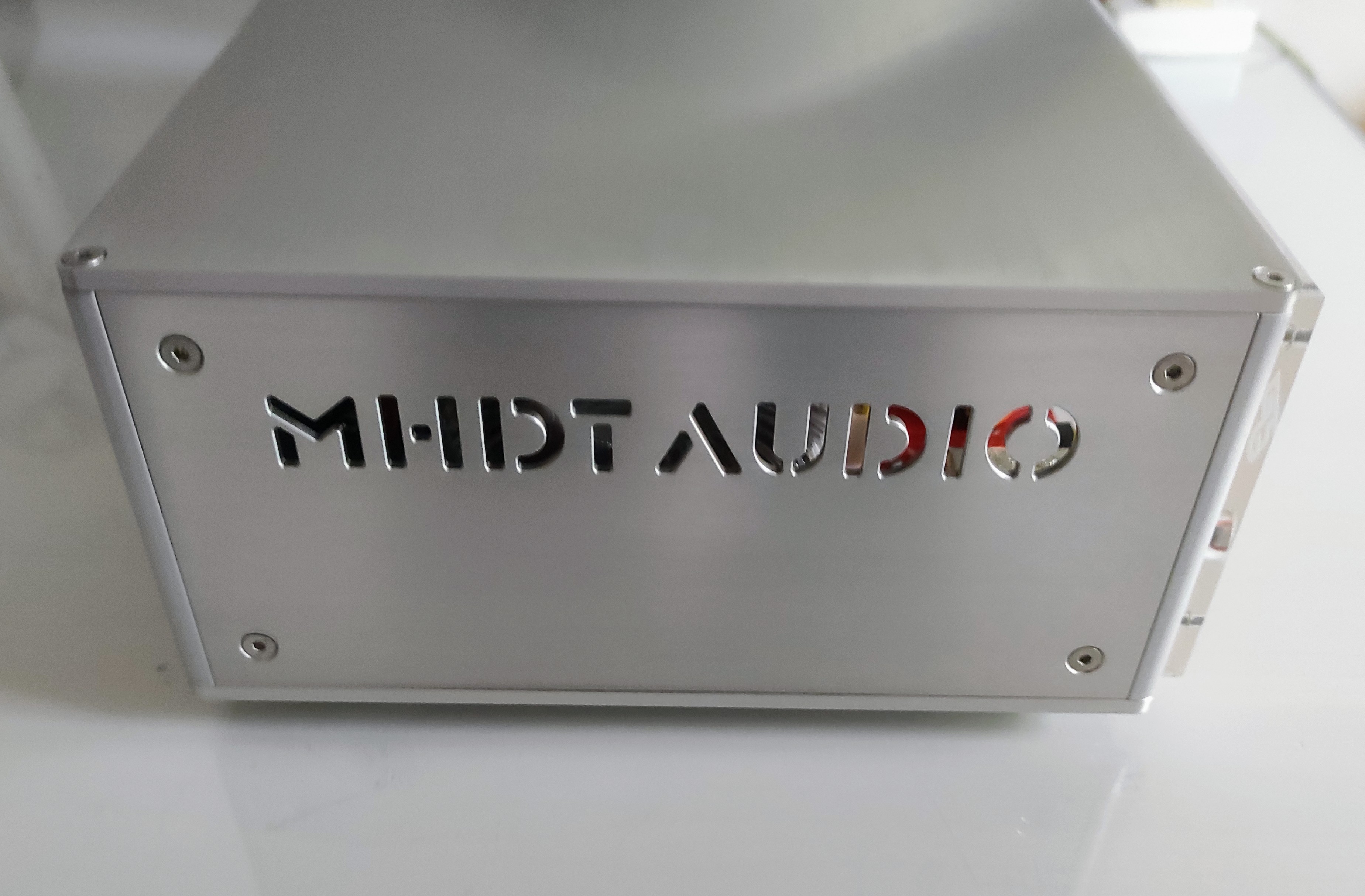 There is a striking analogue quality to the sound that gets imprinted into the listeners head, never letting him to stop listening to music.
It may come as “cliché” but the sound is extraordinary musical with an immensely natural timbre that helps for the instruments and voices to sound extremely close to reality, at least as far as an entry level NOS DAC would allow.
Textural characteristics and qualities are highly prioritized as the Toucan is reminiscent of a good analog source rather than the usual “Delta Sigma”, technically sounding digital converter.
It is not that it is lacking in transparency and fidelity but this time these two attributes are pushed at the back of the overall presentation, staying hidden behind the lines.
No, the sound is not as crystal clear as in similarly priced D/S DACs, nor the most extended in the treble but in the long run, and while enjoying listening to the music, I never felt that something was really missing.
Detail was always present but not magnified, the Toucan is by no means analytical sounding but then music is not about analysis or ultimate detail retrieval.
Music reproduction is about getting closer to reality, reinstalling the naturalness of the sound that was lost during the dedalus routes of procession until the final sound waves reach the listeners ears, and this is where the Toucan really excels.
With the Toucan the music is always flowing unrestricted, touching the senses with the hammering strikes, the melodic lines and the micro-dynamics of the grand piano. 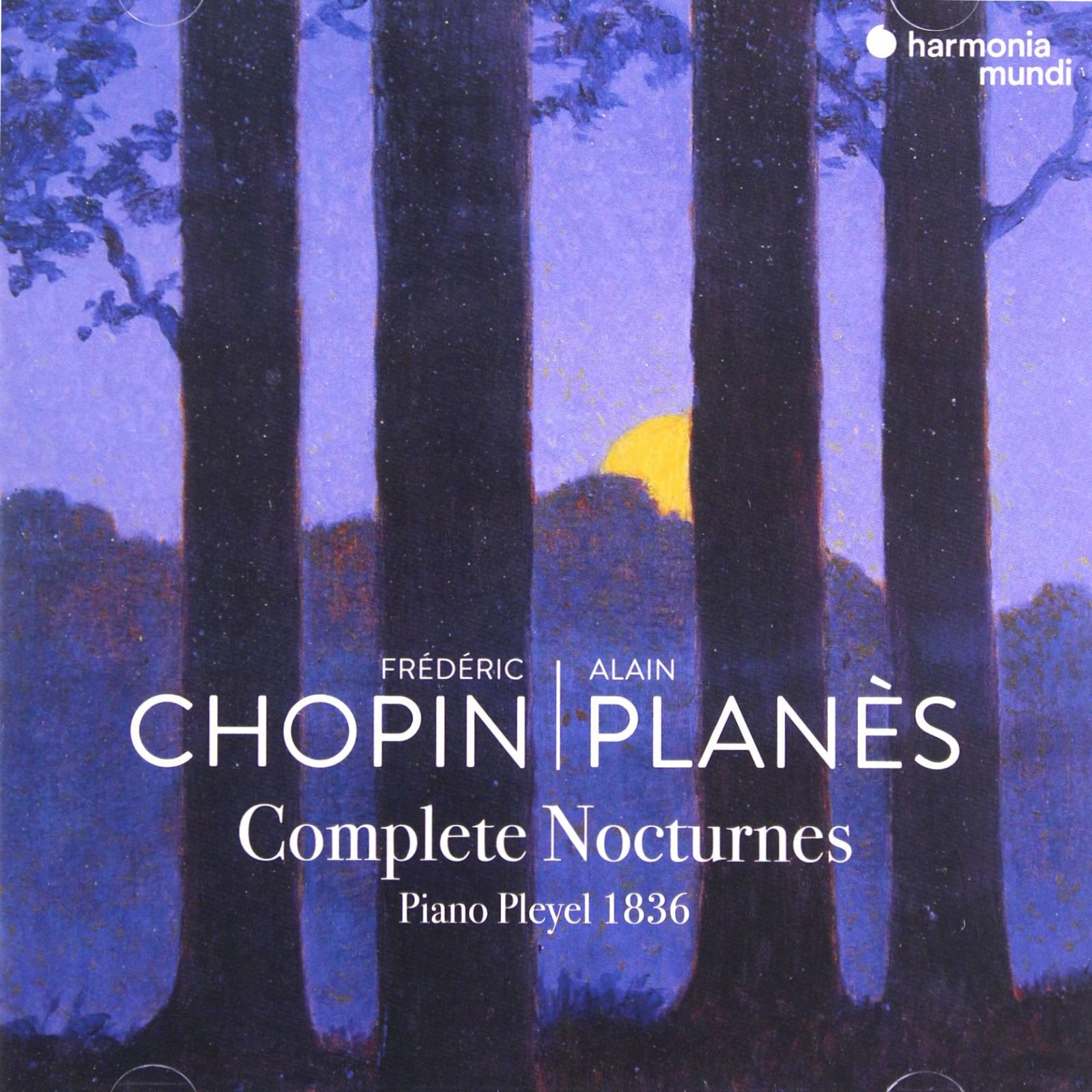 There is only one tube at the output stage but is doing real magic by filling the missing harmonics, adding depth, painting a holographic soundstage that extends outside the physical boundaries of the speakers.
Positioning accuracy is great, not laser sharp but still good enough to let all the instruments occupy their unique and reserved positions.
Technical performance is wholly satisfying but the truth is that it can be bettered by some other DACs based on current production chips.
You are not going to miss a lot while listening to acoustic instruments but for synthesized electronic music and such stuff you may find yourself searching for a source with higher technical prowess.
The Toucan is more about balancing technicalities with musicality, keeping equal distances, cleverly avoiding to sound artificial and unrealistic while retaining the necessary technical background.
Blended is the word to use, bass is full bodied and visceral yet tight and controlled enough, dynamic without overpowering, fast but not hasty and as clear as to stay layered and well defined.
Mid range is heard refined and articulated with plenty of harmonic wealth and a well rounded but not bloated texture.
There is a great sense of musicality and expression to the mid range and while some listeners might miss the ultimate definition or transient attack some others will remain wholly satisfied by the absence of aggressiveness and the lack of fatiguing elements.
This second characteristic holds also true to the treble which is smooth and controlled but not mushy, not the most extended or detailed but still resolving, crisp and brilliant enough but still as natural as possible without sacrificing a lot of its energy. 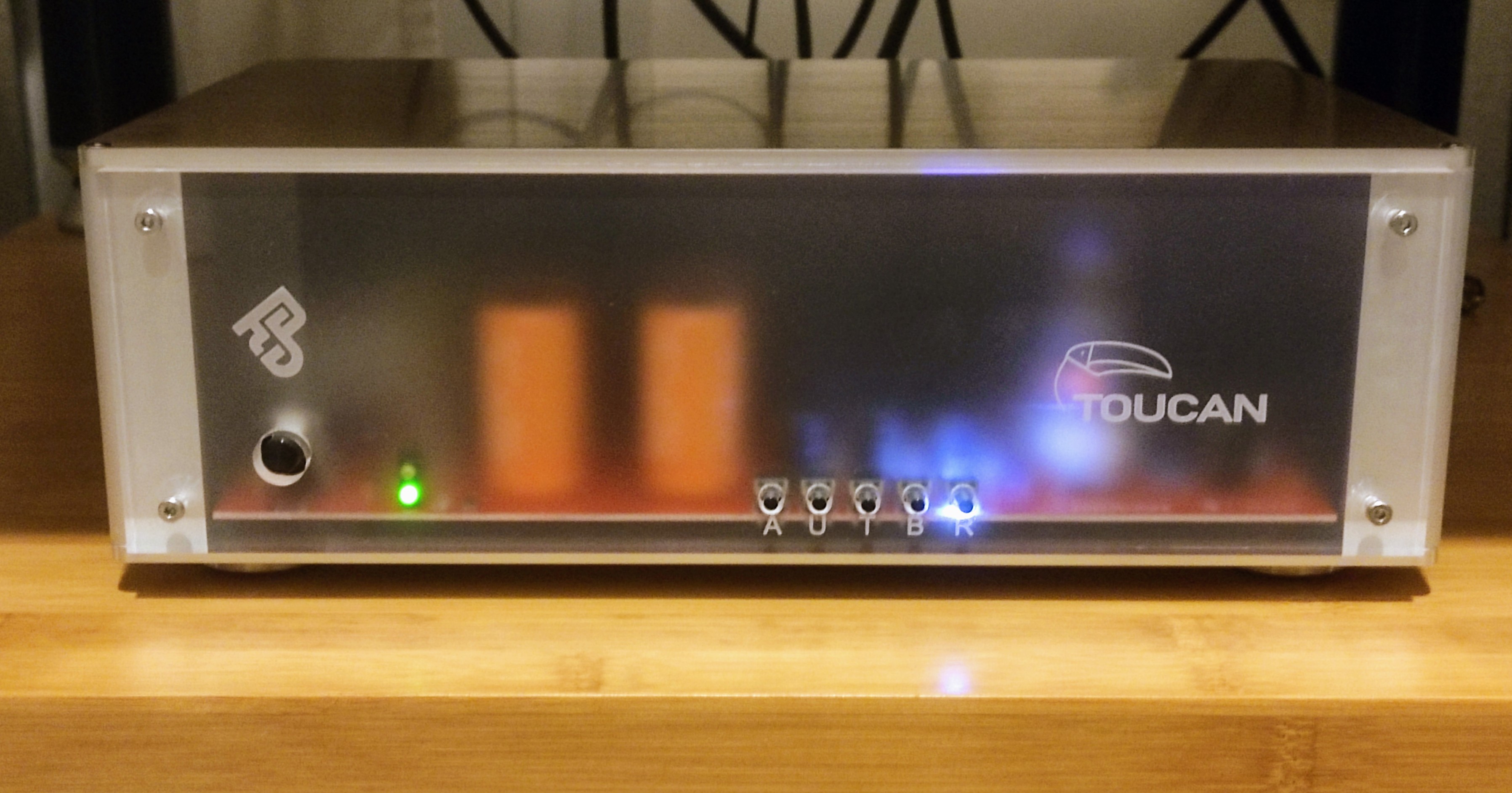 The Toucan is a DAC for the connoisseur, the listener who knows exactly what he wants.
The listener who values timbre and texture, the one who is not after the latest instalments of the DAC chip research nor the ultimate scientific measurements.
The listener with a trained ear, the experienced one, who knows about real music instruments and how they sound in the concert hall.
The listener who is not afraid to sacrifice the last word in technicalities for the most natural listening experience.
The question is, are you one of them?
If yes, then the Mhdt Lads Toucan is a great entry level step into the world of actual music listening.