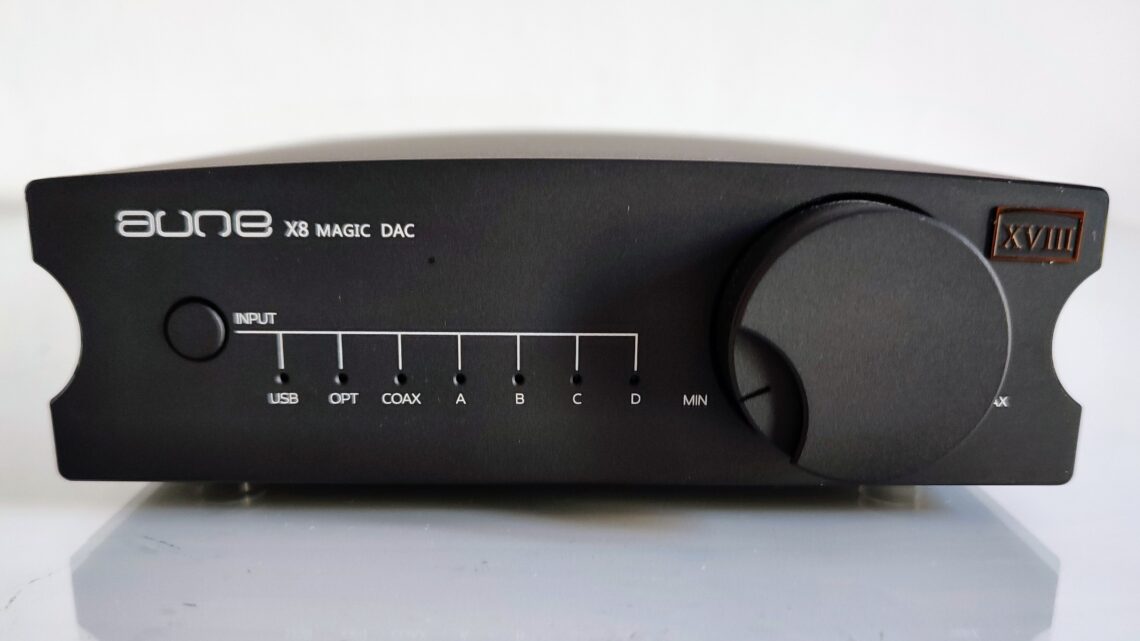 Cons: – Bluetooth connectivity is optional and not standard
– Will not fit discrete op-amps
– Plain LED display without bells and whistles

Aune audio is by now a well known brand that has been devoted to developing desktop and portable audio products such as DACs, digital transports, music players, headphone amplifiers and related gear.
They are committed to the pursuit of superb sound and great user experience while at the same time keeping their prices as friendly as possible.
Aune have lately been releasing new and updated editions of some of their classic products, like the X1s GT which is a superb sounding device as you can find out by reading the following review. 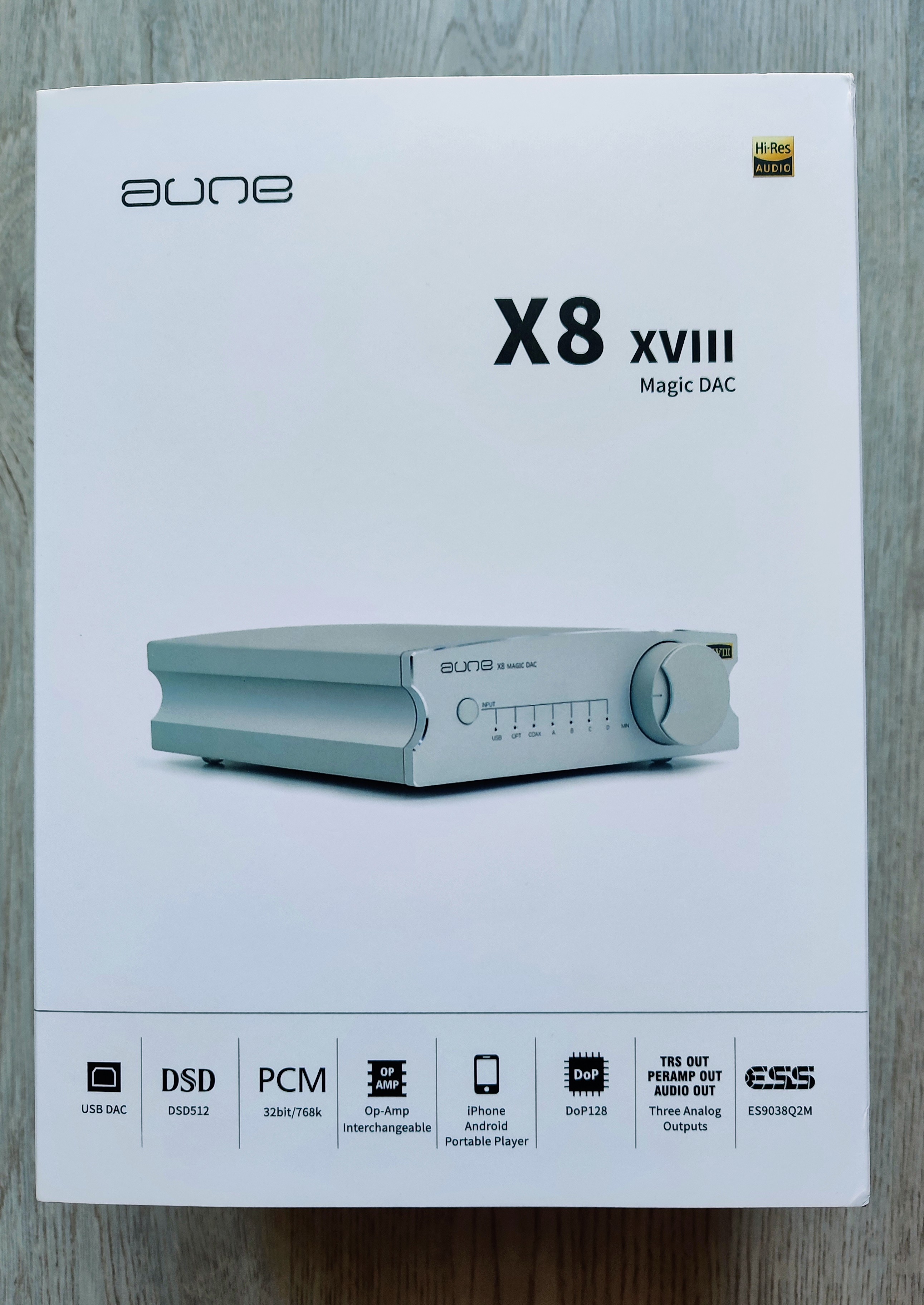 The X8 XVIII is the special edition of the well known X8 for the company’s 18th anniversary.
It features an interchangeable op-amp design which allows the user to easily change the output op-amp and search for the sound of his liking.
The X8 XVIII is compatible with all kinds of dual op-amps but it will not fit discrete designs, like the Burson Audio op-amps, because the socket is located at the bottom of the chassis.
Of course this decision was cleverly made in order to allow for easy op-amp rolling without the need to open the chassis. 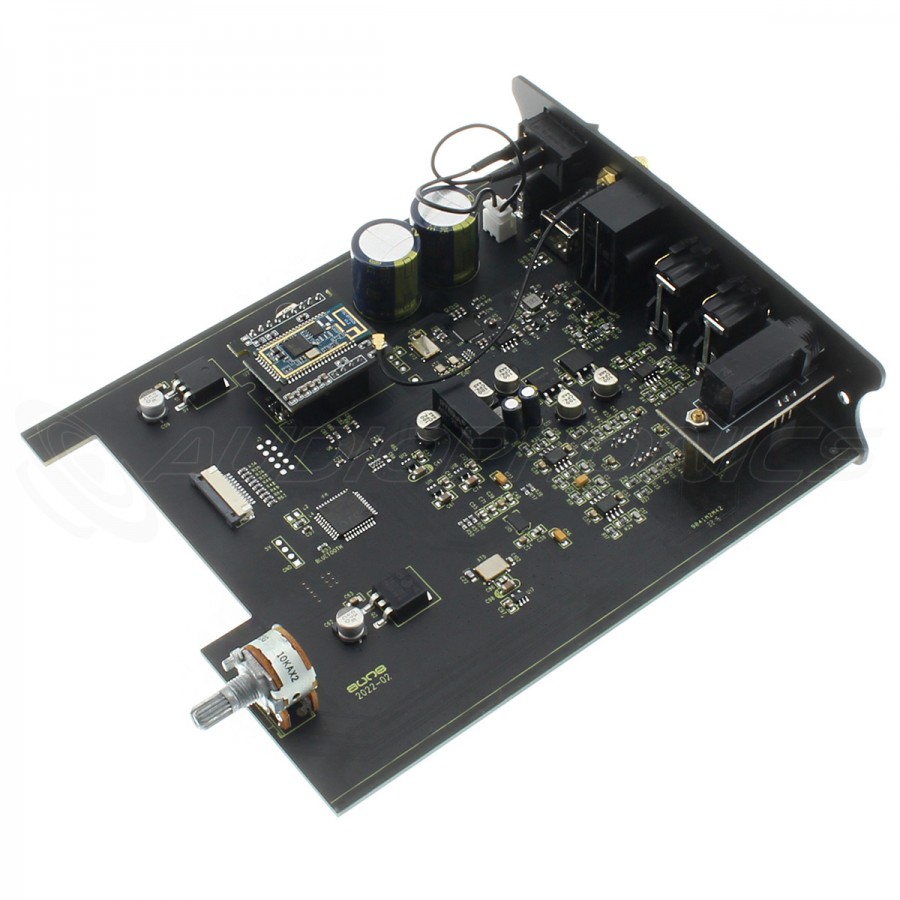 The DAC chip used is the ESS ES9038Q2M, the same as in the X1s GT.
For the X8 XVIII Aune opted for a FPGA core design that supports high-resolution decoding up to 32bit/768k and DSD512 but not MQA.
Using the FPGA technology researched and developed by the Aune engineers, the X8 has purer digital signals, and you get the purest possible sound.
The coaxial input supports up to PCM 384k and DSD128 so you can pair it with a digital transport/player without the need for a PC.
The X8 XVIII besides the RCA preamp and RCA line outputs also has a dual TRS balanced preamp out.
The X8 XVIII is also available with a Bluetooth receiver that supports the aptX HD and LDAC codecs. 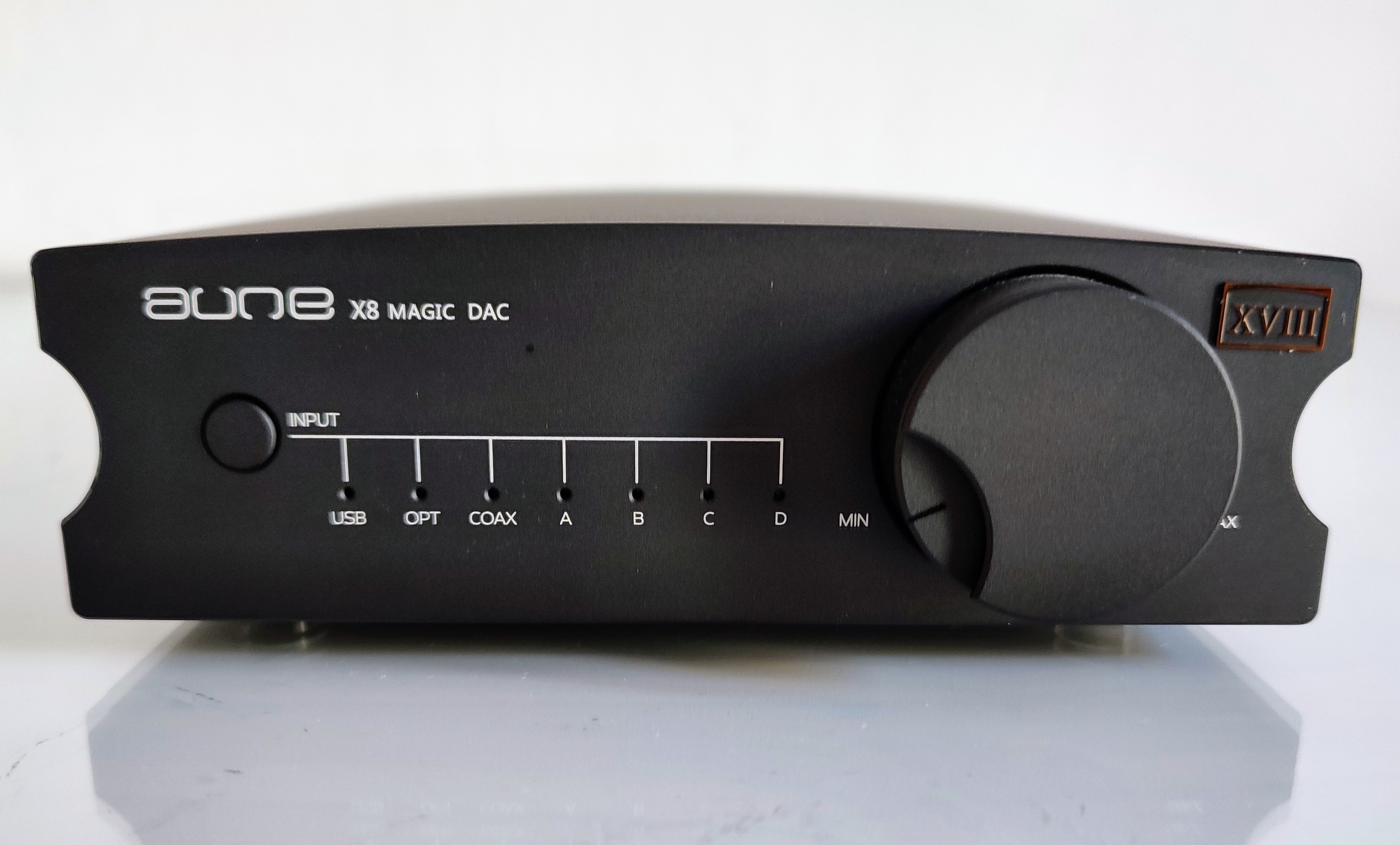 The X8 VIII inherits the signature “Arc shaped” design of the “X” series in a full aluminium CNC machined chassis.
The unit is compact and it will fit into the most cramped desktops while it can be stacked together with other “X” series products like the X7s class-A balanced headphone amplifier.
Build quality is just excellent, the chassis is sturdy and well made with a black matte finish that looks very beautiful but it can be easily stained with greasy fingertips.

At the left side of the front face there is a function button followed by seven indicator LEDs in a row.
At the far right, an oversized aluminum knob is used for controlling the preamp output level.
Single pressing the function button will cycle through the digital inputs while a longer press is used to select the desired low-pass filter.
There are seven low-pass filters available: Linear phase fast roll-off, Linear phase slow roll-off, Minimum phase fast roll-off, Minimum phase slow roll-off, Apodizing fast roll-off, Hybrid fast roll-off and Brick wall.
The selected digital input is displayed by a corresponding LED but the low-pass filter is displayed by means of four LEDs marked A to D and their combinations so you have to memorize the correspondence.
As an example, when the Brick wall filter is selected then the C and D LEDs are simultaneously lit.
Input sampling rate and lock status are not displayed at all. 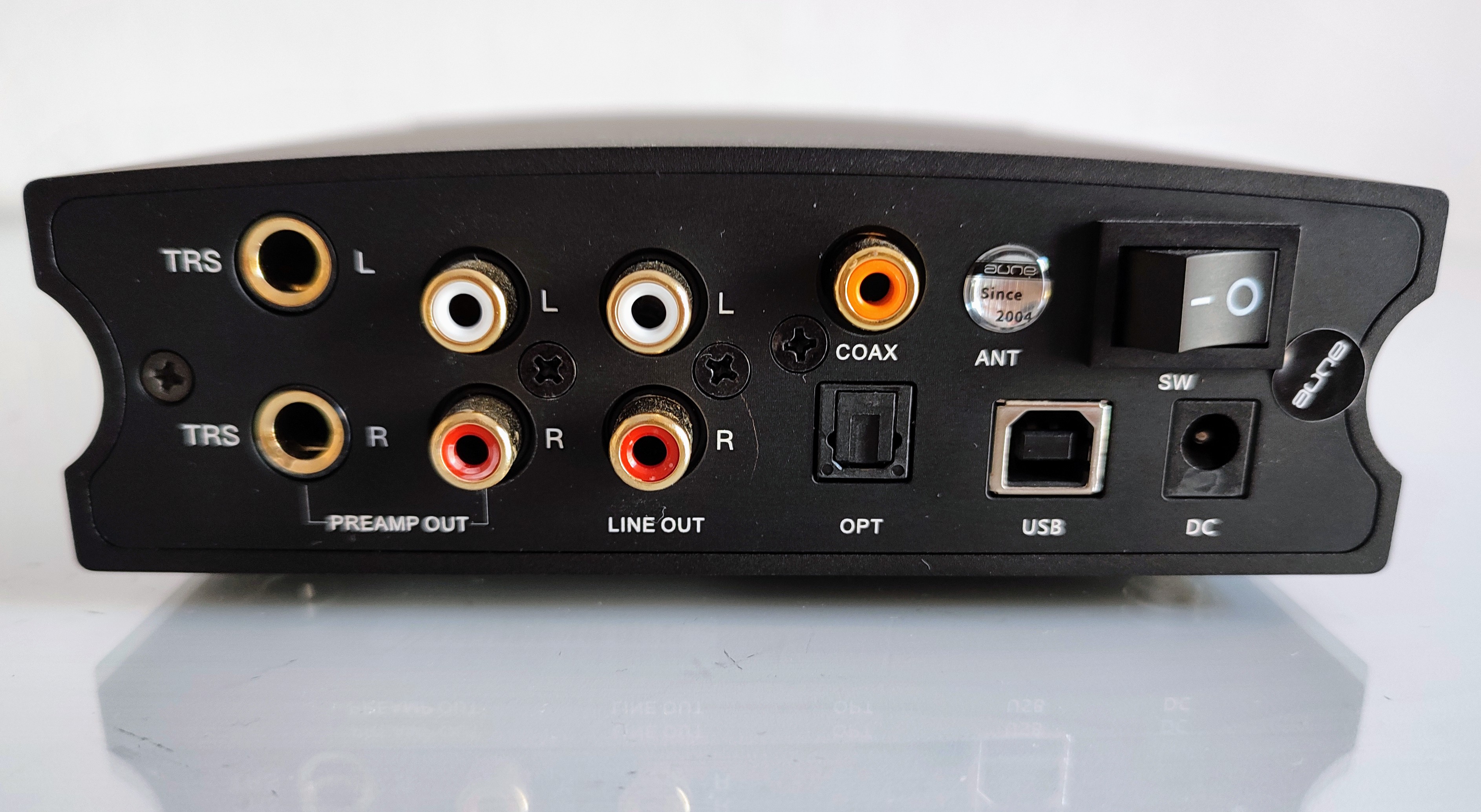 At the back of the chassis you will find the power switch, the DC power input, USB, optical and coaxial digital inputs, RCA and TRS preamp outputs, the RCA line output and the optional Bluetooth antenna.
The Aune X8 VIII is powered by an external DC power adapter which is a high quality, low-noise power adapter from Mean Well. 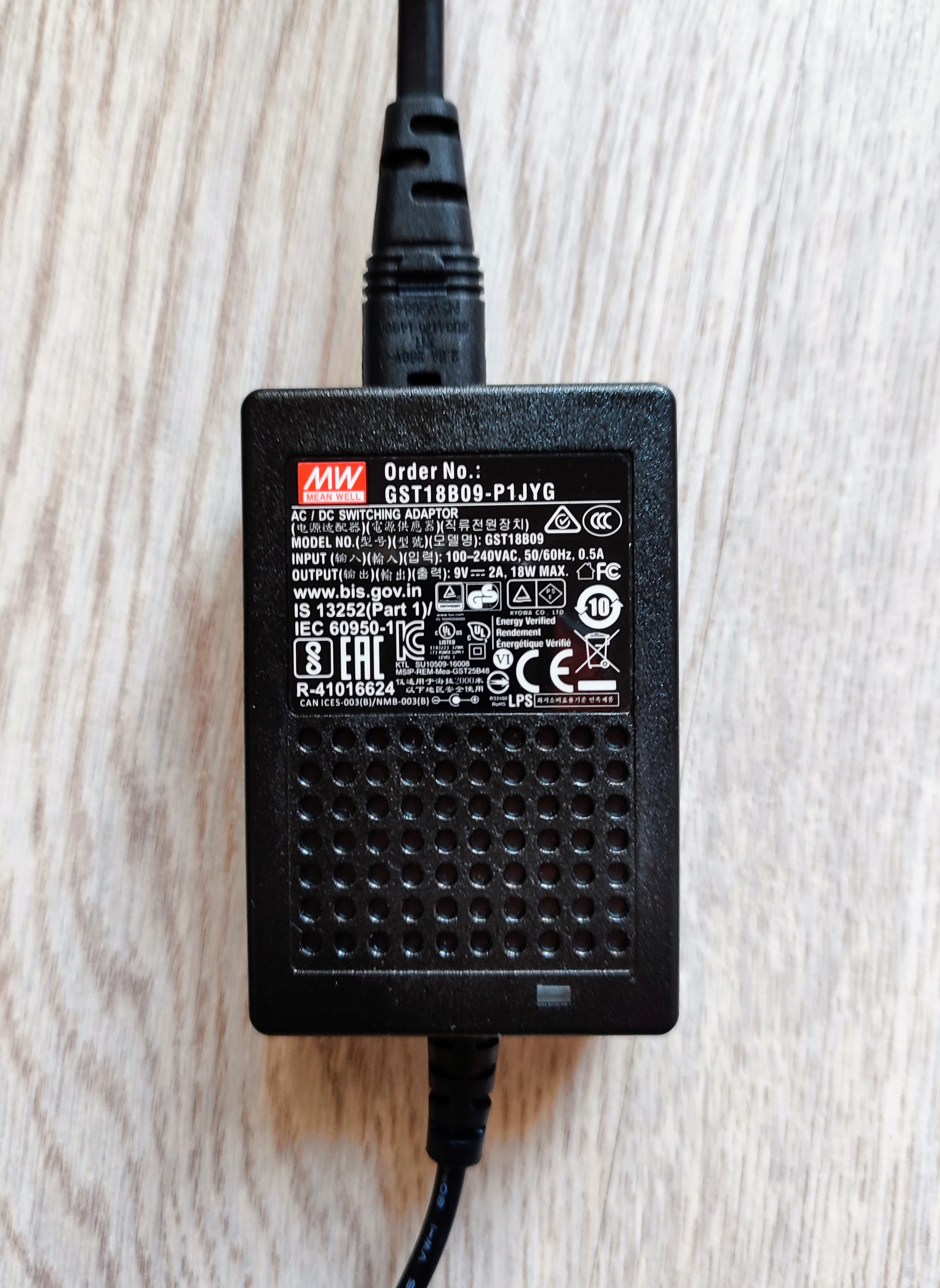 Except for the power adapter you also get a USB cable, a quick start guide, a Bluetooth antenna for the wireless version and a set of op-amps together with tweezers if you have ordered the op-amp version. 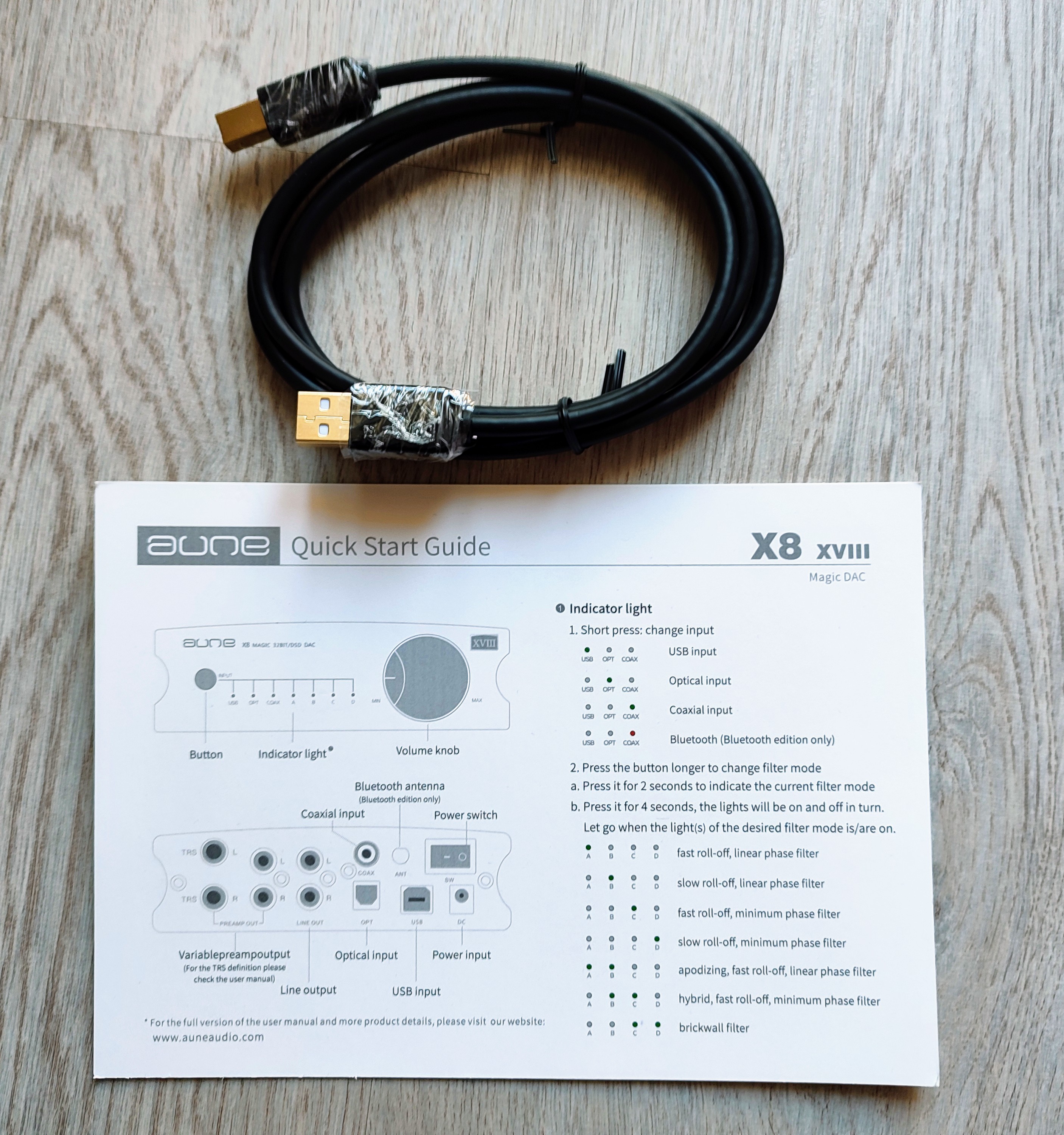 The X8 VIII was left playing music for about 150 hours with the stock op-amp installed.
Most of the listening was done with the stock op-amp and then I have tested all the others.
Two headphone amplifiers were mostly used, the SMSL HO100 and the Schiit Vali 2+ together with a great variety of headphones, including the Sennheiser HD660S/650, HiFiMan Sundara and Focal Clear Mg.
All headphone cables are from pure silver made by Lavricables.

The sound quality is unexpectedly impressive for the category, the X8 VIII is an excellent sounding DAC without even considering the low price tag.
I have tested numerous DACs that use the ES9038Q2M DAC chip and I wouldn’t be exaggerating at all by saying that the only better I can think of is the six times more expensive Musical Fidelity M6x!

From the first listening sessions it became pretty apparent that the sound engineers must have spent a great deal of time fine tuning the X8 VIII.
This is by no means the usual “off the shelf” implementation where you just throw a couple of op-amps and get the job done.

The X8 VIII is musical, engaging, enjoyable and deeply expressive with an organic sound signature pretty much rarely found in similarly priced DACs.
The timbre is amazingly natural and realistic, all instruments sound with the correct tonality and plenty of harmonic wealth while overtones are reproduced very convincingly.
With all kinds of music that I have tested, the X8 VIII displayed an excellent level of sentimental involvement and the most addictive characteristics with a welcomed absence of digital artifacts.
As an example I very much enjoyed listening to the following recording of Mozart’s piano concertos, played at a period instrument where the X8 VIII did an excellent job in correctly reproducing the diverse sonorities of this unique instrument. 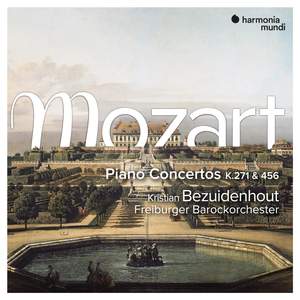 At the same time the X8 VIII is crystal clean, transparent and completely silent, it resolves well and is not that lacking in detail retrieval and fidelity when compared with the more expensive competition.
The soundstage is expansive and grand sized, holographic and immersive, especially with certain of the extra op-amps, and it will not by any means bottleneck your amplifier and headphones.

There are no tonal shifts or any kind of frequency manipulation, the frequency response is absolutely linear and neutral.
No sharpness, no shouting mids, no bleeding mid-bass, no harsh and treble forward sound, no listener fatigue with this DAC.
The bass is tight, controlled and impactful, dynamic contrast is stellar, sound field is deep enough, imaging is precise and articulation is of the finest quality.
Something else that stands apart is that the overall texture is weighty and full bodied, this is not the usual lean sounding ESS DAC.

Now, I wouldn’t like to sound like this is the end game DAC that surpasses all others in performance, there are certainly better sounding ones with superior technicalities, finer quality and much more realistic timbre but for the category, the X8 VIII is really a winner. 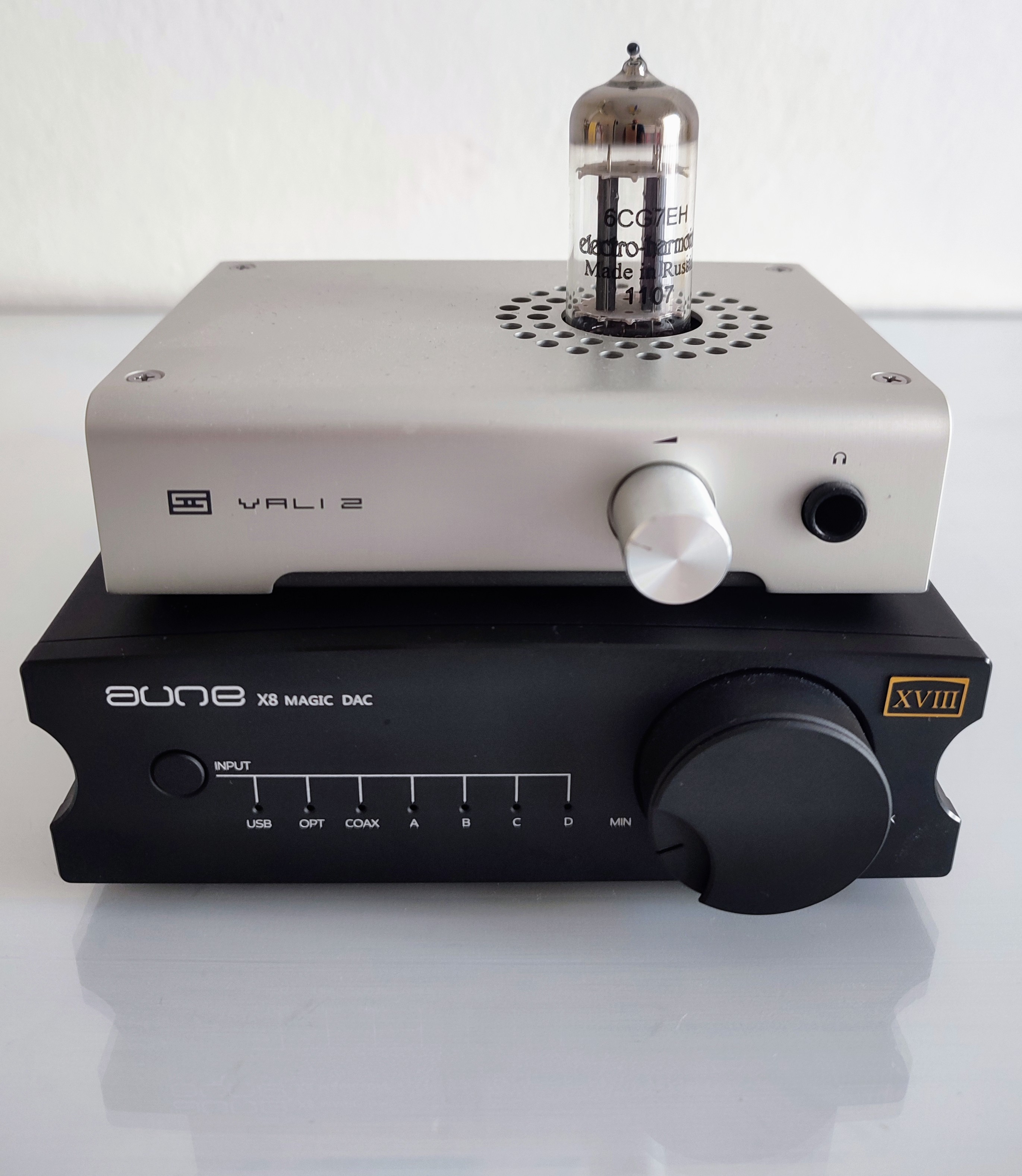 The op-amp rolling kit comes with five of the most famous op-amps, the “crème de la crème” of the market.
You get the Muses 01, OPA2134, JRC5532, OPA2604 and LME49720, together with all the necessary tools to start rolling for your favorite sound. 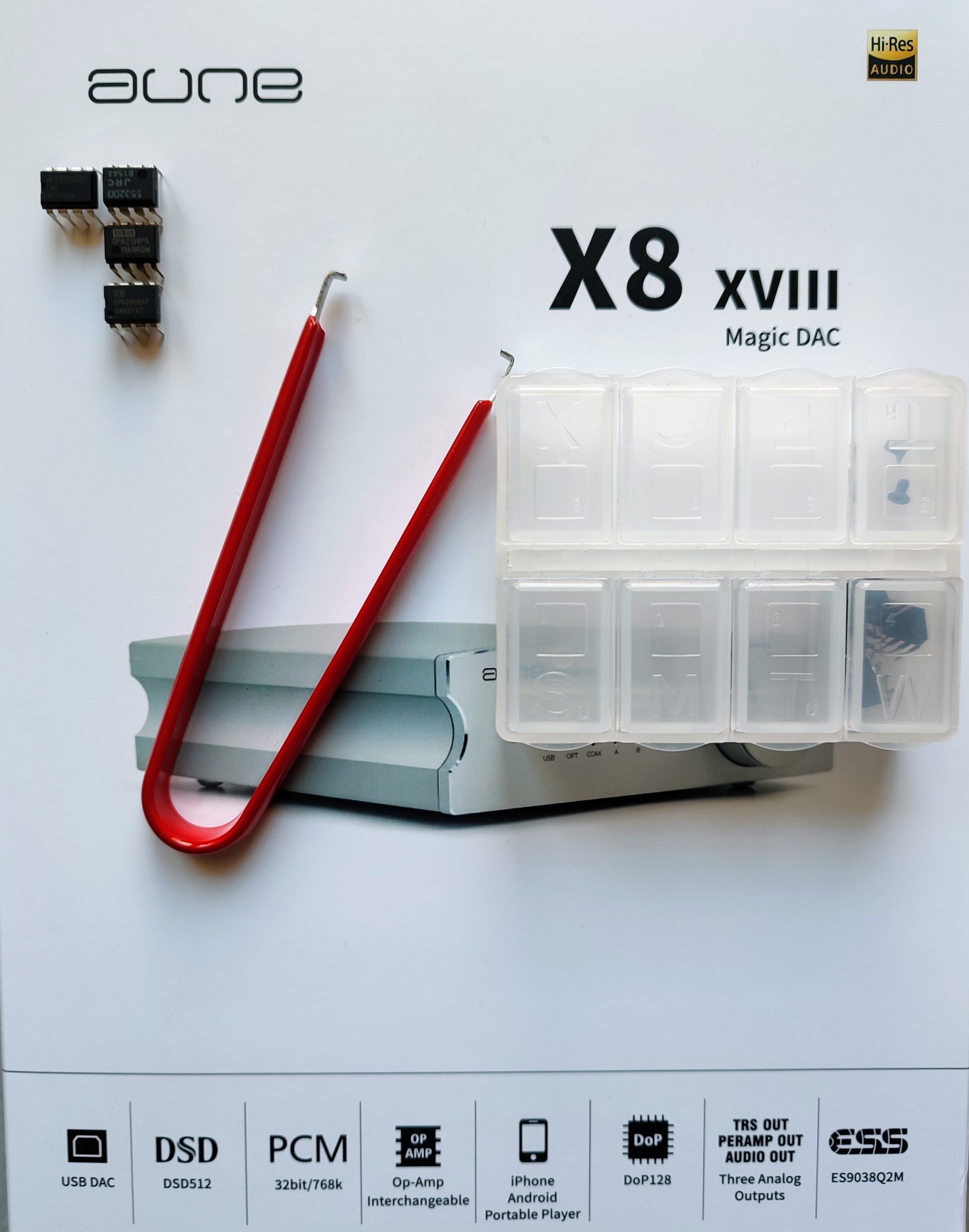 Rolling is pretty easy:
First of all you have to power off the X8 VIII and unplug it from the mains.
Then in order to access the op-amp socket you have to unscrew the small lid underneath the chassis with the aid of the supplied hex key and you are ready to start rolling.
Carefully unplug the installed op-amp with the included tweezers and then even more carefully plug the op-amp of your choice paying special attention not to bend the pins. 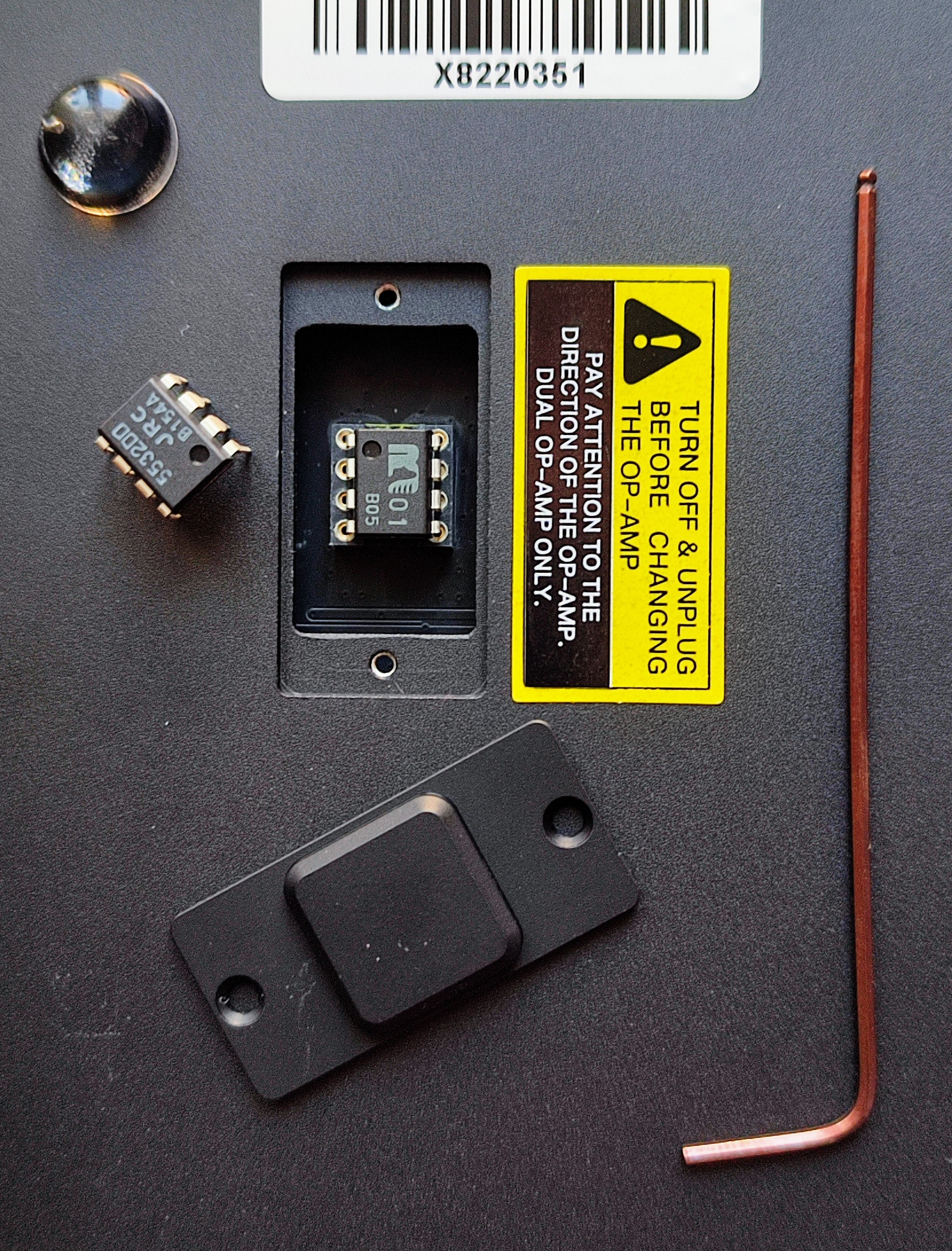 I have tested all the included op-amps, each one offered a slightly different sound shaping that it would take too long to describe in detail and would spoil the rolling surprise.
Don’t expect night and day differences, we are talking about fine tuning the sound rather than altering the basic sound signature of the X8 VIII.
One op-amp sounded more detailed and clean, the other opened up and sharpened the treble while another one offered a more lush mid-range or better holography.
All of them sounded very interesting and were worthwhile exploring but my quest for the perfect sound ended after I installed the MUSES 01.
This is an old time favorite of mine and I have to admit that I am a little biased but I liked the sound so much that I completely forgot about the others.
This op-amp is the timbre master, more natural, realistic and organic, very musical sounding, slightly warm with a holographic soundstage, it is almost impossible not to like it. 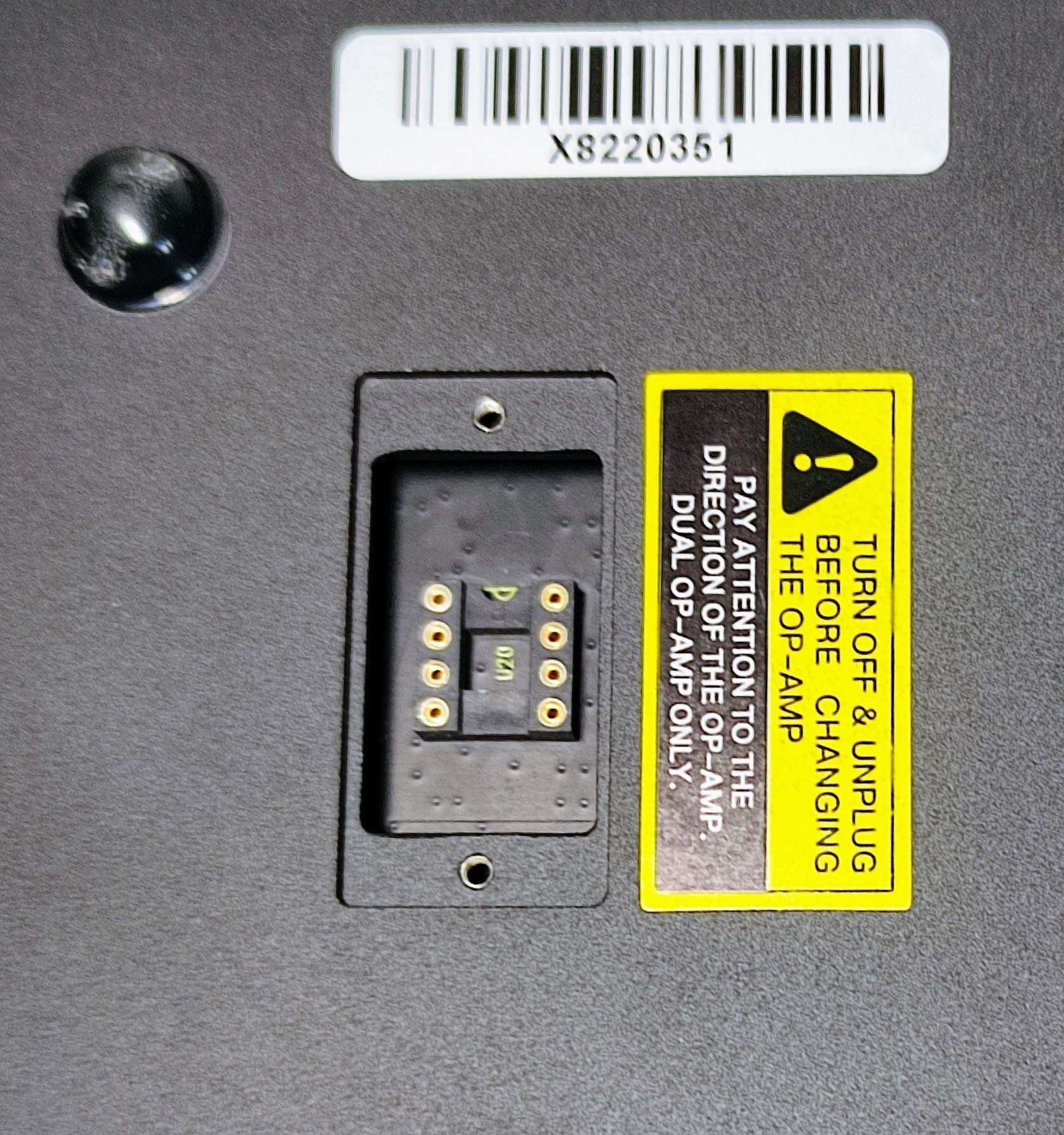 The X8 VIII with the op-amp kit is slightly more expensive than the plain version but I would strongly suggest buying this one because it simply offers great fun.
The only negative I can think of, is that there is a great chance to become an op-amp junkie and spend most of your time rolling rather than actually listening to music!

I have tested the X8 VIII against a bunch of some really good sounding DAC/amps of the same category, like the FiiO K5 Pro, SMSL DO100 and DO200, Topping DX5, YULONG Aurora and Aune X1S GT.
Leaving aside some extra functions or the inclusion of a headphone amplifier or not and judging by sound performance alone, some of them offered a more technical performance, some others sounded really good and somewhat different than the X8 VIII but in the end of the day no one surpassed the X8 VIII in timbre realism and musicality, at least as far as I am concerned. 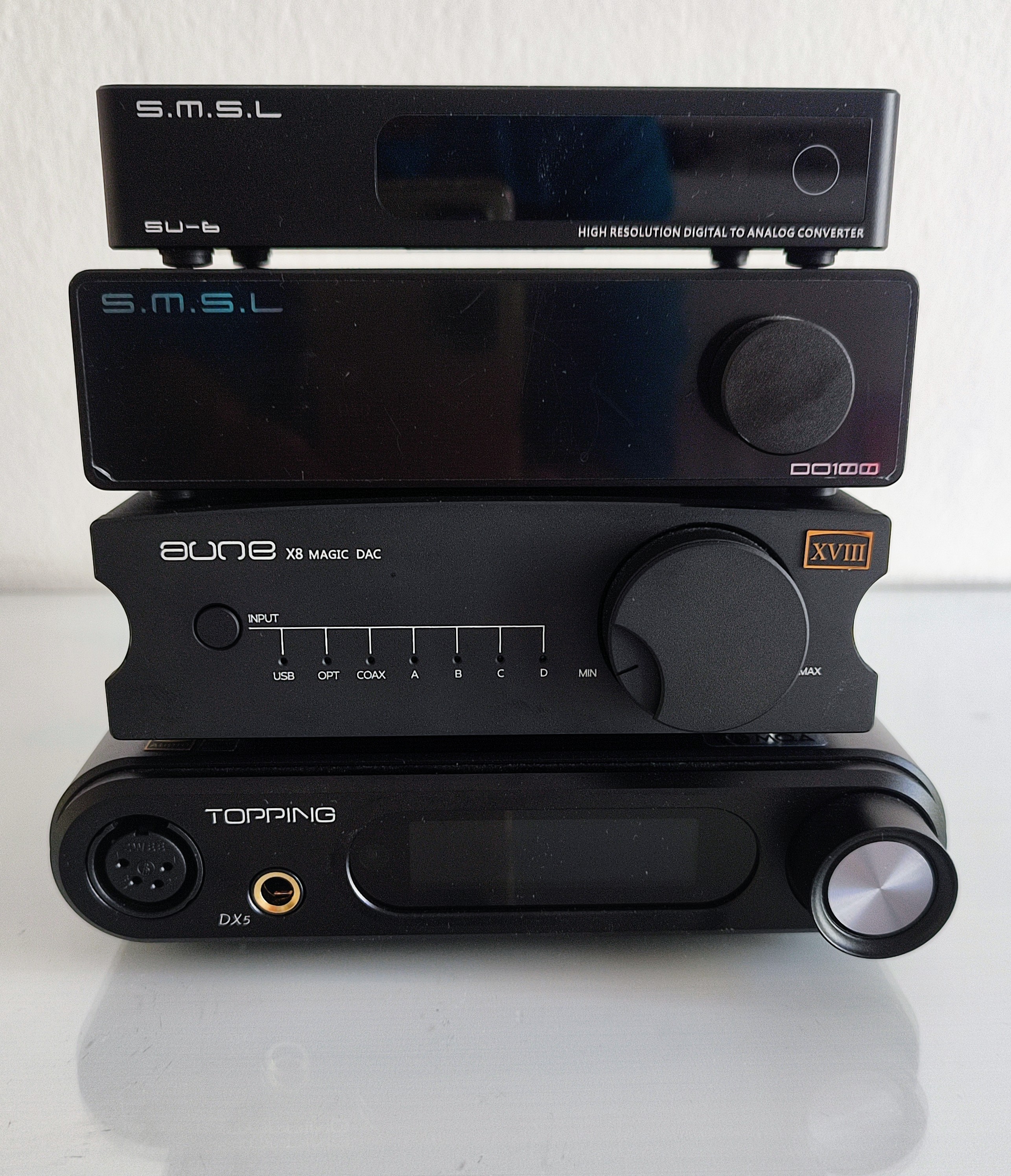 Plain and simple, the Aune X8 VIII is one of the best sounding DACs you can buy without spending a fortune.
It has excellent build quality and it is exceptionally well tuned with an utterly musical and natural sound signature that makes it stand apart in a market mostly crowded with “all sound the same” DACs.
Add the op-amp rolling friendly design which allows for further personalization of the sound and it is pretty obvious why the Aune X8 VIII is a clear winner and more than highly recommended.
After reading the review you will not be surprised to find out that the Aune Audio X8 VIII has became my new reference mid-range DAC.