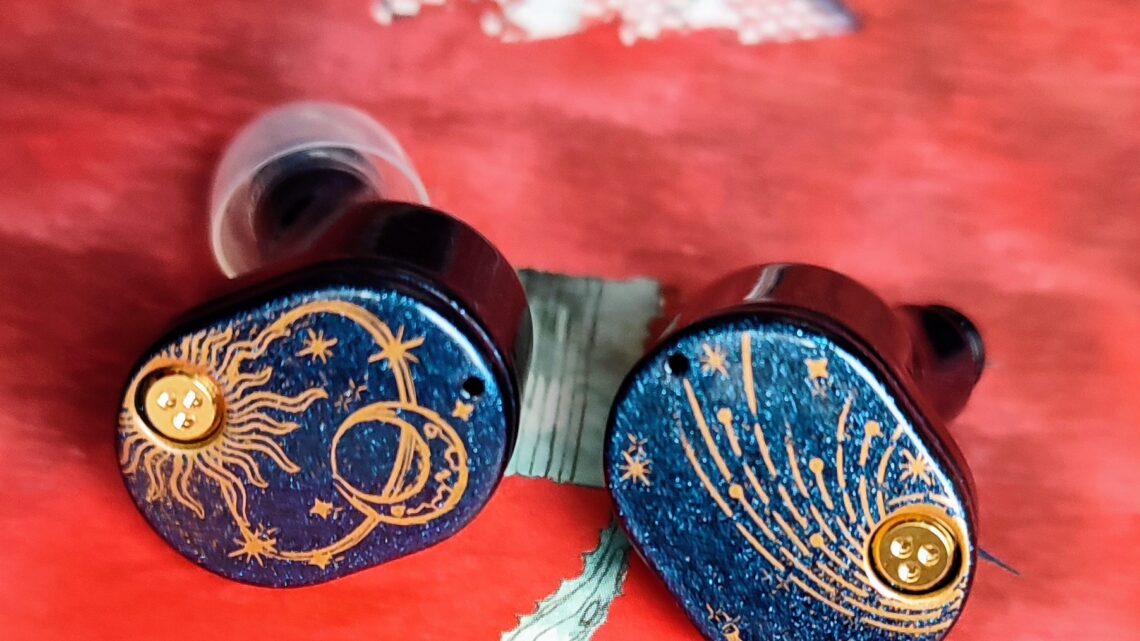 Cons: – Mostly uneven and unbalanced tuning
– Metallic timbre
– Upper-mids and treble spikes
– Can become too bright and unforgiving
– Lacks in resolution and refinement
– Too lean and dry sounding
– Odd shaped, bulky and heavy with a mediocre fit

The review sample was kindly provided free of charge in exchange for my honest review.
I didn’t receive monetary or any other kind of compensation and I don’t use affiliate links.
The price of the Moondrop Stellaris is $109.99 and you can buy it from Shenzhen audio. 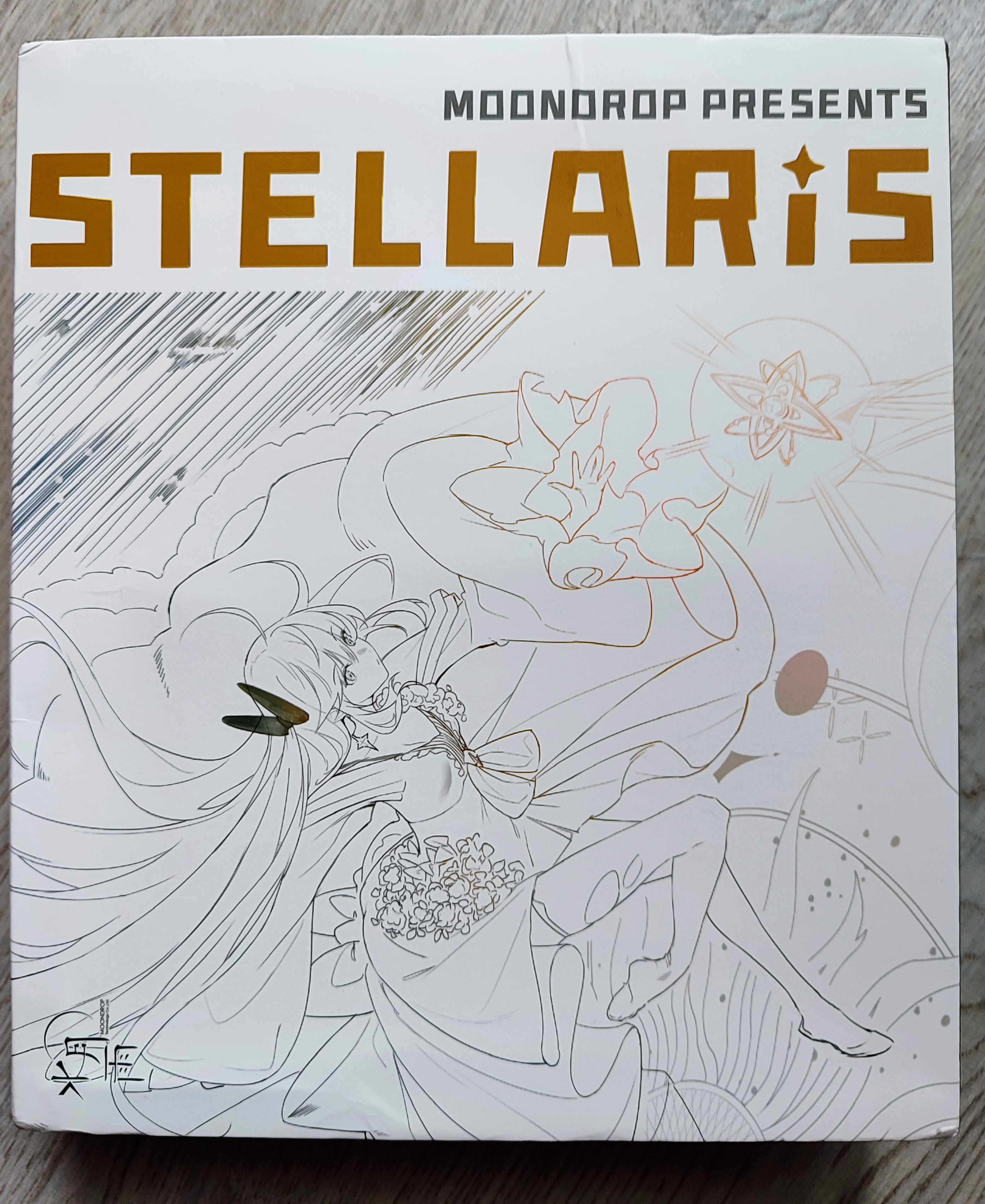 The Stellaris is the first planar in-ear monitor from the well established Moondrop brand with a budget friendly price.

Among the many planar drivers on the market, Moondrop selected a 14.5mm planar driver with excellent nonlinear distortion performance and consistency. The acoustic structure of the driver has been carefully modified by attaching an independent built-in acoustic cavity to accurately control the resonant frequencies of the system.
The driver of the Stellaris utilizes a sub-nanometer diaphragm with a thickness of 1μm, whose high-precision, ultra-thin, uniformly stressed diaphragm structure can deliver lower split vibration and nonlinear distortion in the vibration process.
So it can generate a more transparent and melodious timbre with clearer details. a frequency response performance that is highly consistent with the VDSF Target Response based on HRTF and optimized for listening characteristics. 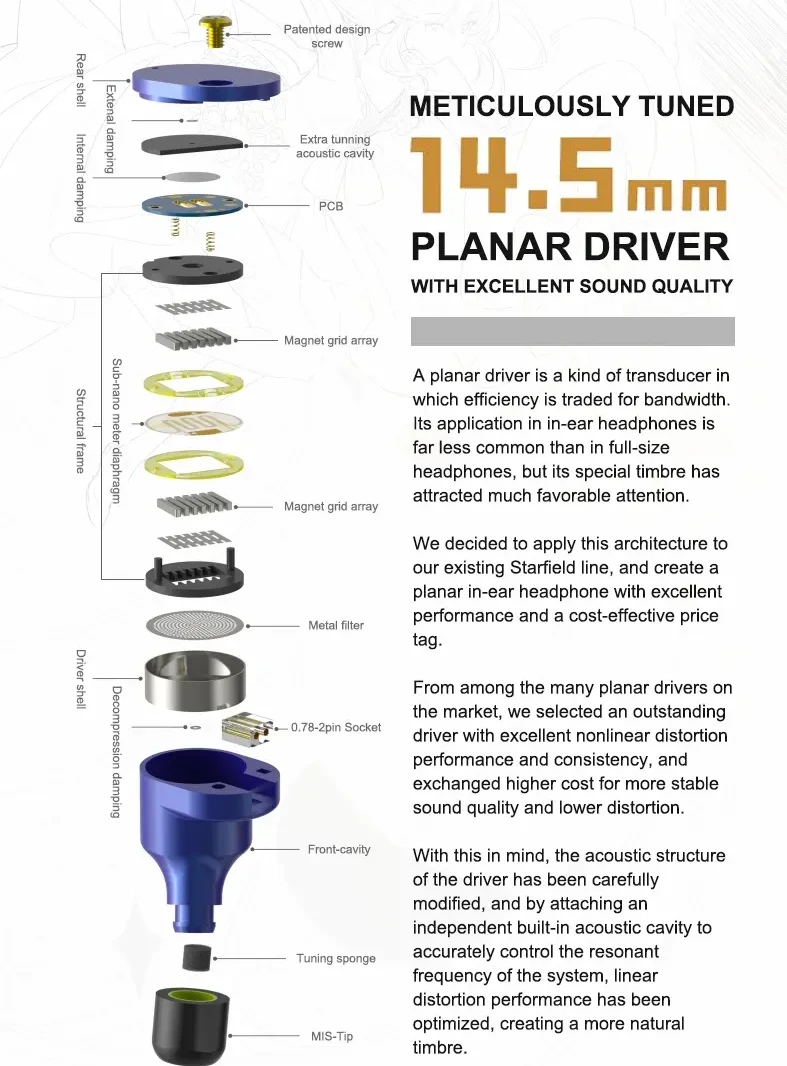 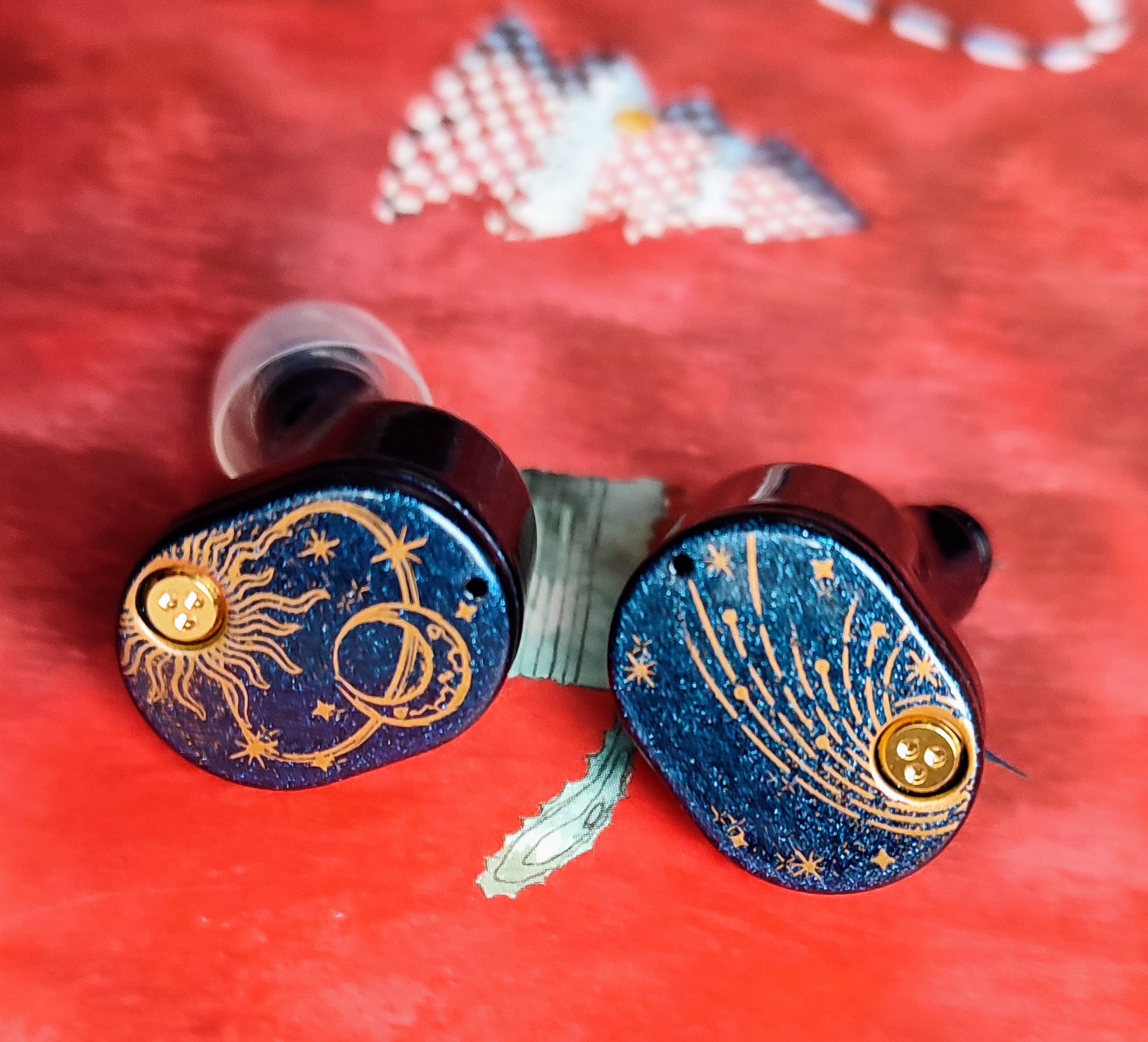 The shells are made from aluminum alloy and feature an iridescent finish with a starry, Stellaris, theme which can reflect different colors under varying angles and light conditions.
The finish is flawless but it looks prone to chipping if the earshells get accidentally dropped to a solid surface.
The artistic design is very beautiful, Moondrop makes some of the best looking earphones in the market but the Stellaris is very different from the mostly compact sized earphones of the brand.
This one is really huge and quite heavy, the earshells are bulky and the sound nozzle is too long.
This particular shape is kind of odd as it makes the housings sit far away from your ear concha with a great gap between them so the nozzle acts like a lever.
The earshells can move and rock up/down but you can achieve a deep and tight fit with great passive noise attenuation, well at least as long as you don’t move your head too much. 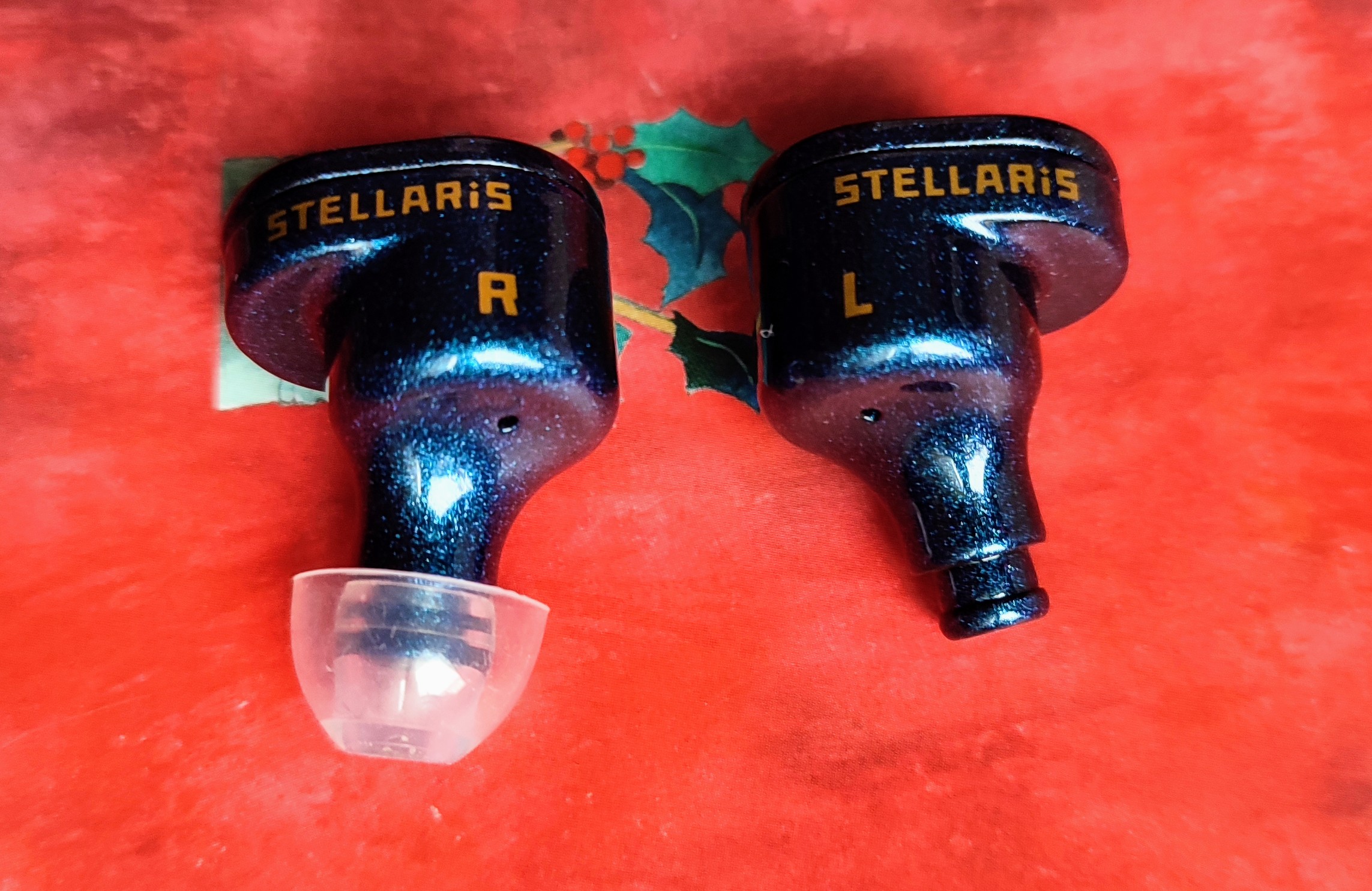 The Stellaris features a detachable cable with the 0.78mm 2-pin interface that ends in a 3.5mm plug.
The cable is of typical quality for the price tag, not bad but nothing special to talk about.
It is quite soft, it doesn’t get too tangled and it has low microphonic noise.

The Stellaris, except for the cable, comes with three pairs of silicone and three pairs of memory foam ear-tips plus a nice carrying case.
The silicone ear-tips are newly developed by Softears and are made of high-permeability liquid silicone. Based on ergonomic design, they fit far more snugly in the ear canal than ordinary silicone ear-tips, ensuring the lossless sound quality of bass under pressure and improved bass performance without any bleeding into the treble. 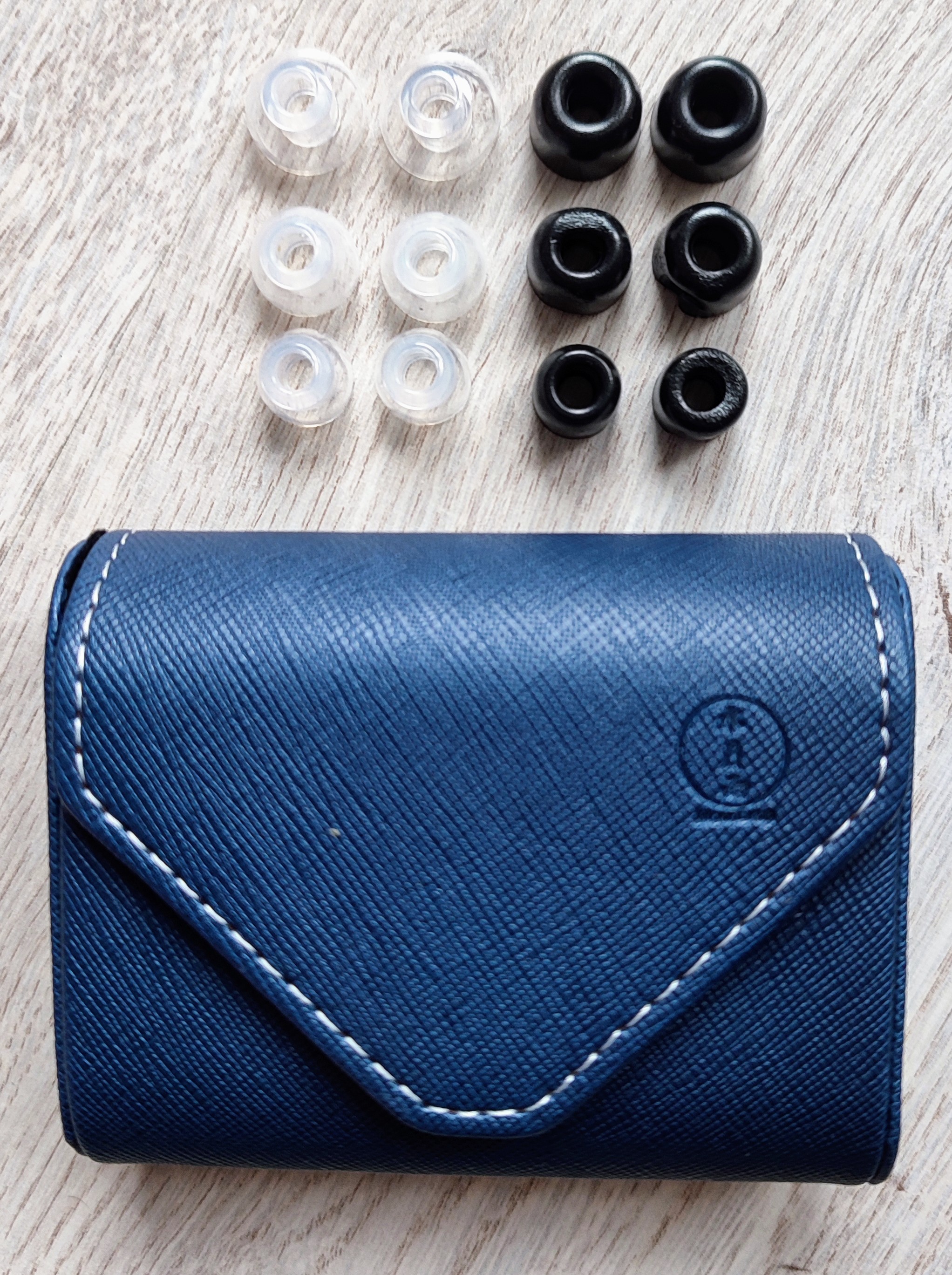 The Stellaris requires a good amount of burning time.
At first they sounded very bright and harsh but after about 150 hours they have settled to become treble forward but not in an annoying manner as to cause listener fatigue.
The Stellaris are also quite power hungry and they need a decent source to sound at their best.
If you make the mistake of using them straight out of your phone or a low power output USB DAC dongle, then they will sound excessively bright and thin.
Give them more power and you will find out that the overall sound signature is getting a noticeable improvement.
Most of the listening was done with the Chord electronics Mojo 2. 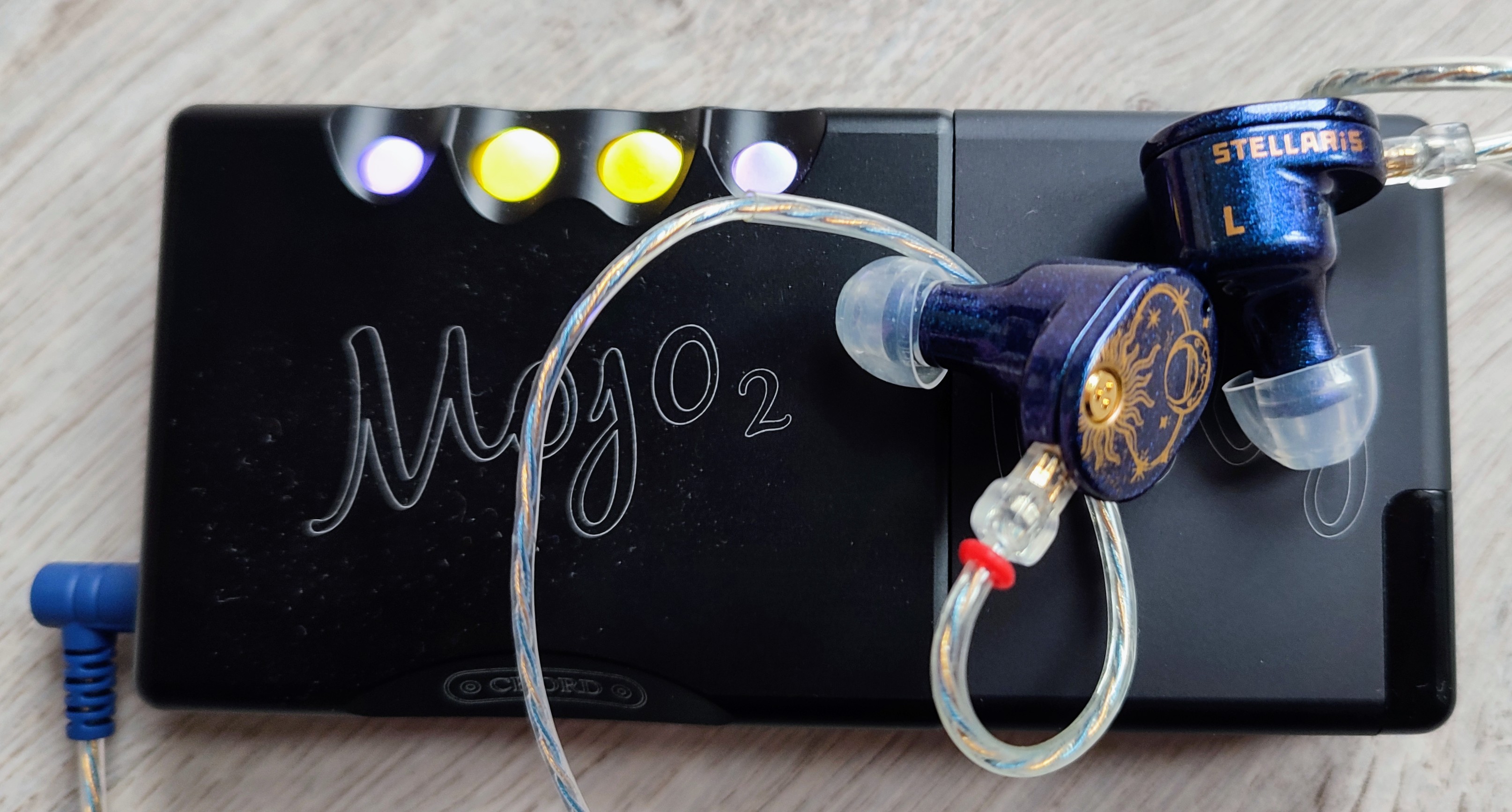 The overall sound signature reminds me a lot of some HiFiMan headphones, like the HE400SE or even some Beyerdynamics with the infamous treble peak.
The Stellaris has an overly energetic and lively sound signature with a good amount of bass, an upper-mids forwardness and treble emphasis tuning.

The bass extension and overall low end balance are really good, you get a decent amount of sub-bass with a fairly neutral and linear tuning up to the mids without excessive mid-bass emphasis or bleeding into the mid-range.
The bass is tight and well controlled with a fairly good amount of definition and clarity, the typical planar bass that is not that visceral and dynamic but has great layering and excellent articulation while the neutral tuning helps a lot as to avoid any masking effects.
The mid-range has a kind of uneven tuning, it is balanced and neutral with the exception of an upper mids emphasis, you can call it a peak, which favors the register so certain instruments or vocals can sound out of tune, too pronounced or even shouting depending on the recording.
The texture is rather lean, there is plenty of free space while clarity and articulation are good but don’t expect miracles regarding the resolution, the Stellaris is not that refined and transparent sounding in the mid-range nor in the treble.
The treble is on the brighter and energetic side of things with too much of accentuation on the brilliance range that adds a metallic timbre to the sound and an artificial tonality to certain instruments that are also perceived as lacking in weight and natural decay. 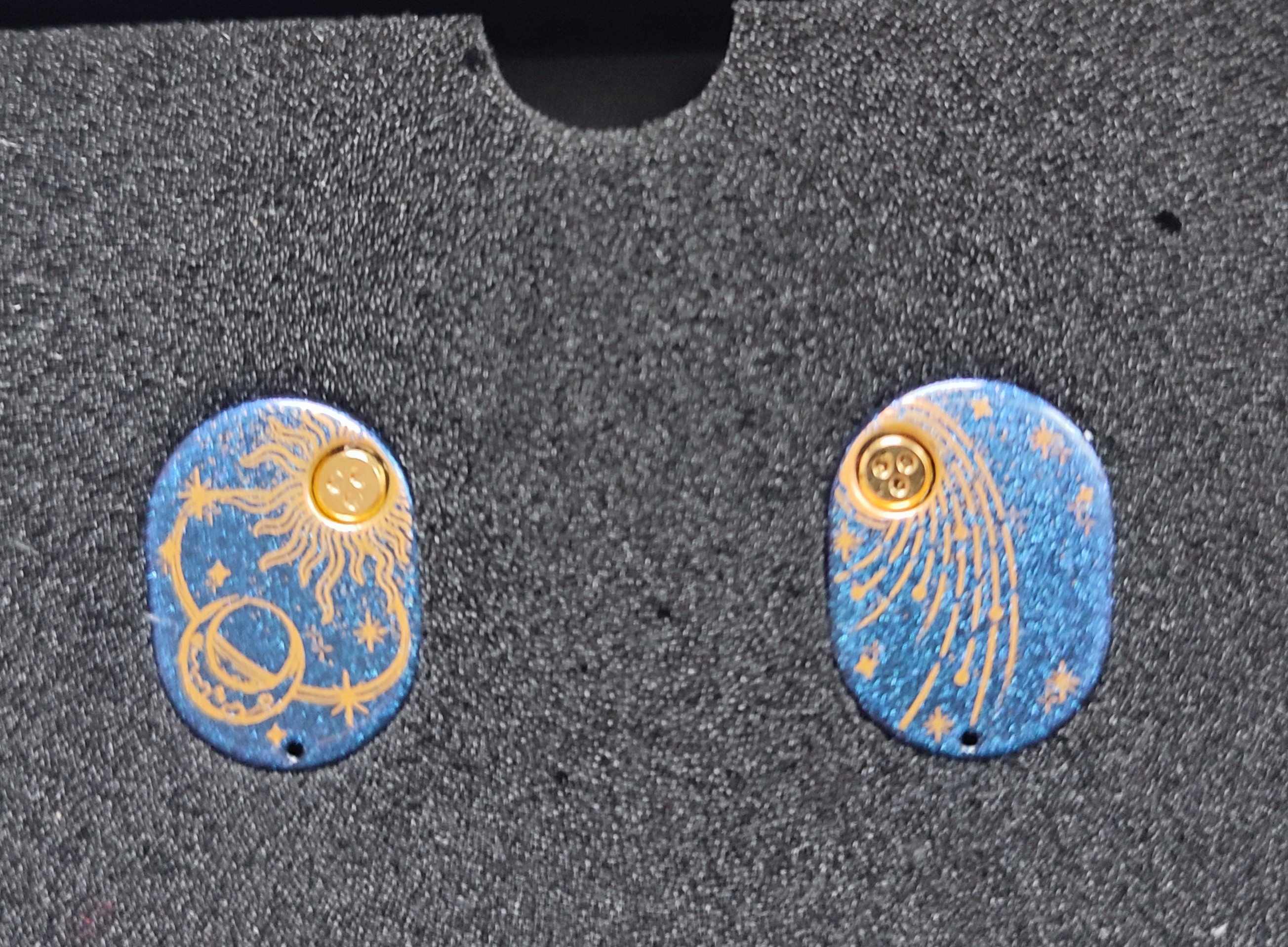 The Stellaris offers plenty of detail retrieval and has a very luminous tilt to the sound which adds an overly shiny and brilliant character to the Stellaris which nonetheless manages to avoid sounding too harsh or piercing at least with well recorded music.
The Stellaris is better matched with warmer sounding sources and is not at its best with lower quality mixes that are already bright and harsh.
It fairs pretty well with good quality productions of classical music as long as you are not critical about some tonal inaccuracies and the lack of texture weight.
It is aided in this task by the spacious and open soundstage which might be lacking in depth and holography but it has a realistic wideness and a sharp, accurate imaging. 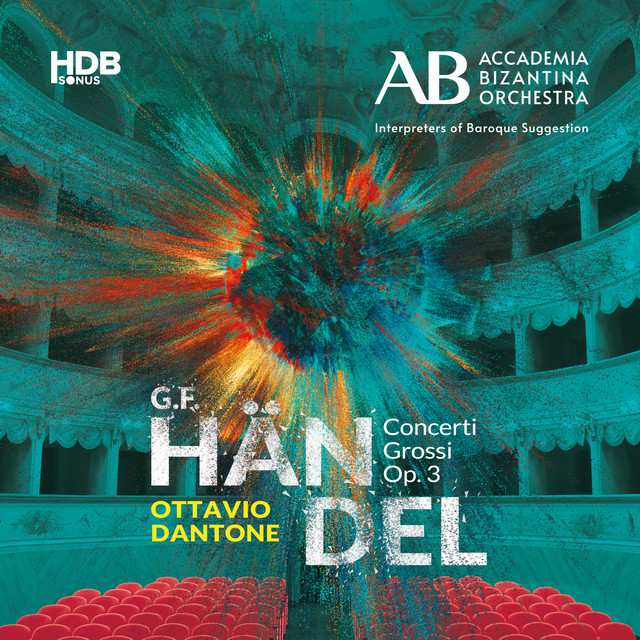 The TinHifi P1 Max is another budget friendly planar magnetic earphone.
This is also quite bulky but nowhere near the Stellaris and is also considerably more lightweight and offers a much more comfortable and secure fit thanks to the anatomically shaped earshells.
You get 11 pairs of various eartips and a better quality cable but only a carrying pouch instead of the beautiful case that comes with the Stellaris. 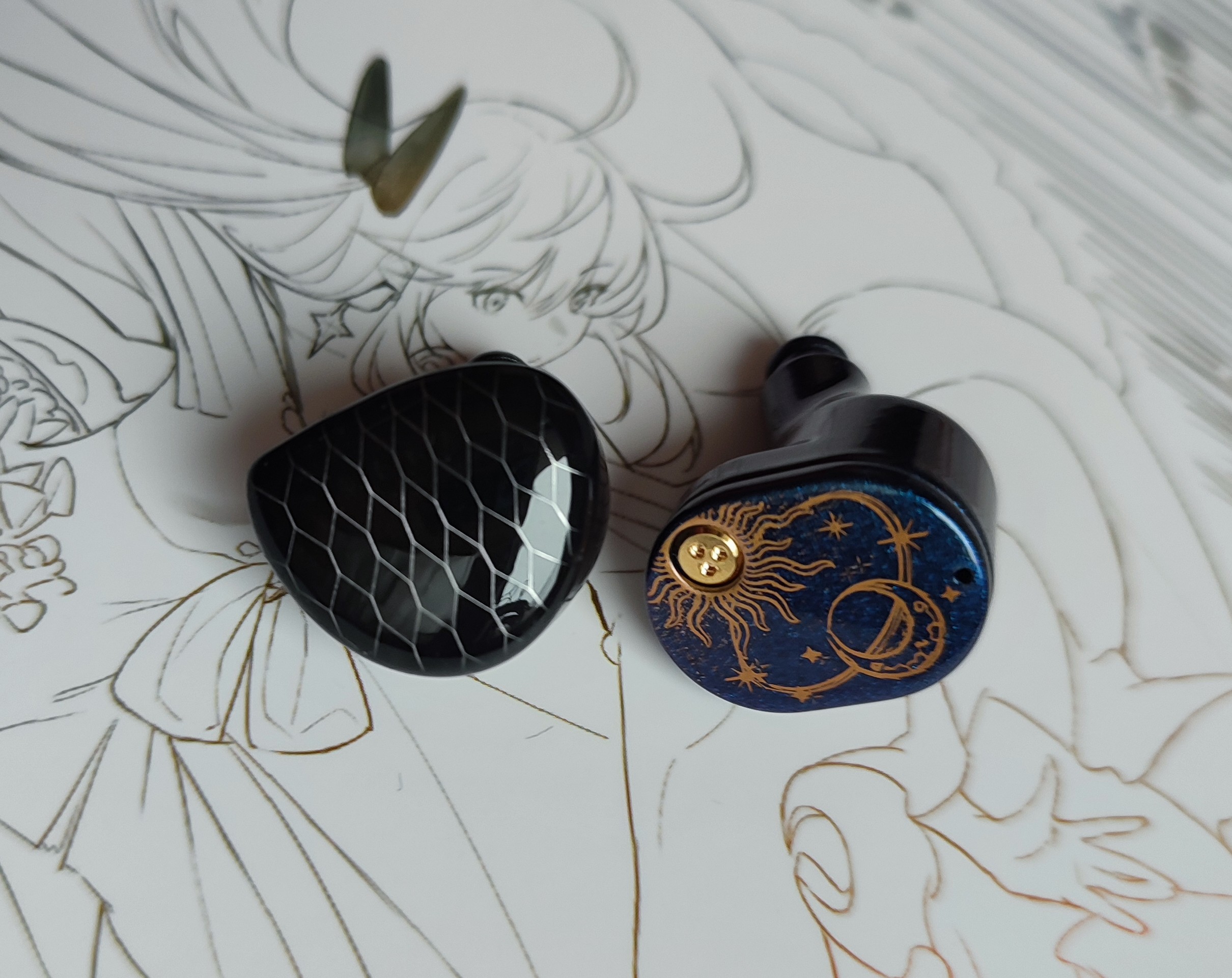 The tuning of the P1 Max is the exact opposite of the Stellaris, this is a mildly warm and inoffensive sounding earphone with a touch of mid-bass emphasis and mildly subdued upper-mids and treble.
It is not as technical and clear sounding as the Stellaris, nor that well defined and controlled in the bass but it is much more even, coherent and enjoyable with a greater factor of musicality and much more natural timbre.
The soundstage might be lacking the spaciousness and the sharper imagining of the Stellaris but it feels more holographic and immersive plus it has a more weighty and lusher texture. 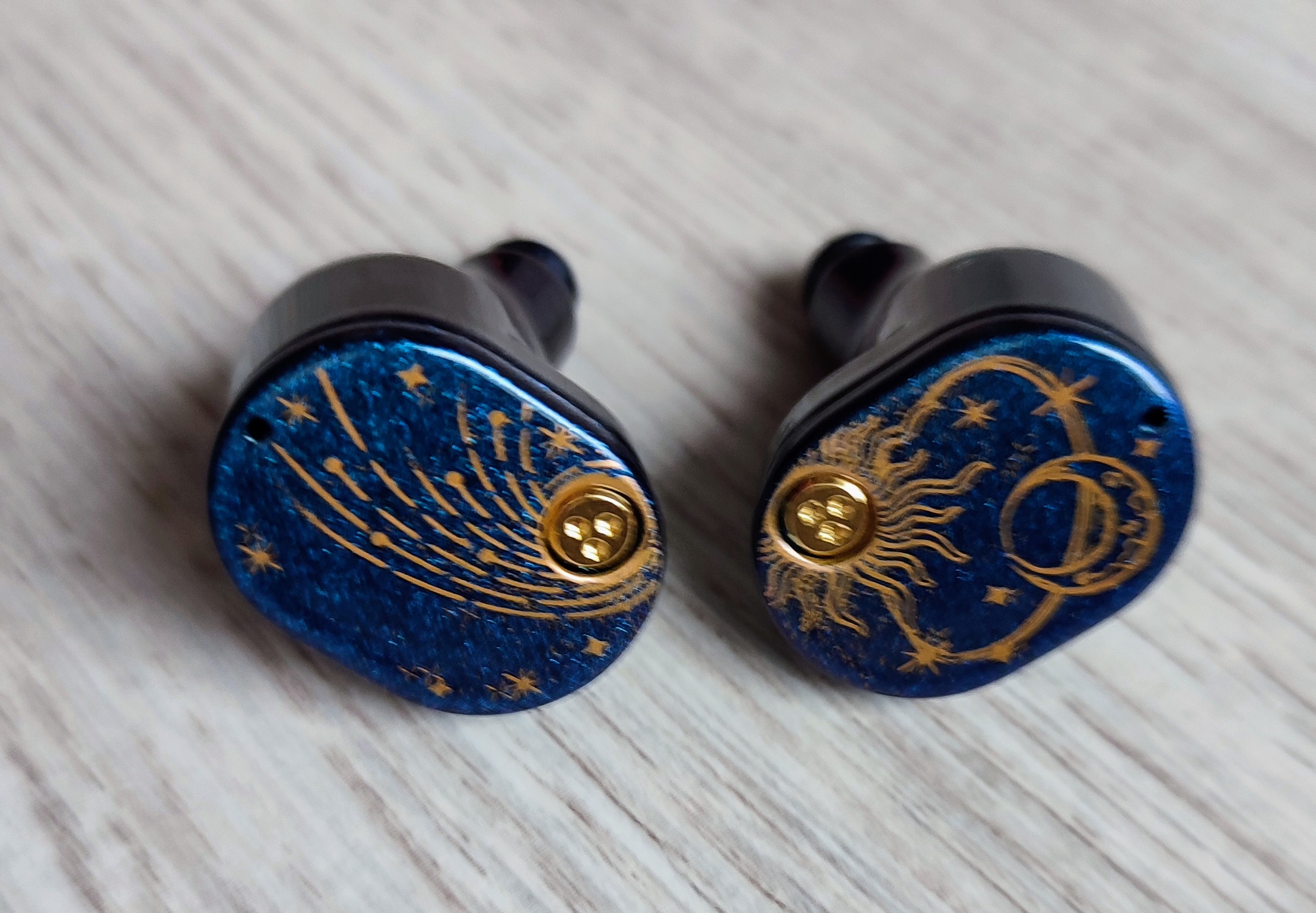 The Stellaris is a welcomed first planar magnetic earphone from Moondrop that unfortunately needs some extra polishing and reworking in order to be competitive and really stellar.
For now, it is mostly recommended for people who like a lively and bright sound signature with plenty of detail retrieval and a luminous character as long as they don’t mind the extra bulk and the odd shape.
There is much room for improvement and Moondrop will certainly do better in their next planar installment.